Cities with and without transit

I was not at the Congress for the New Urbanism last month, so I was unable to take part in the debate, "Can a city be successful without transit?" I understand it was all in fun, and I honestly can't say that I could have done much better than the debaters, with the amount of time available for preparation, but there was a problem with the historical perspective. Several of the debaters stipulated that for millennia there have been cities that have been successful, but that in the words of Andrew Burleson, "there was no transit before the 1890s". This last part is actually wrong, but there's a larger issue with transportation myopia.

"The carabas was a public car in the shape of a long cage, with capacity for twenty people. The carabas took four and a half hours to get to Versailles, for a fare of twenty-five pence." - Official Journal of April 29, 1875. Model: Maurice Leloir. Photo: Michel Urtado.
First, there was indeed transit before the 1890s. Burleson and Edward Erfurt are probably thinking of the first trolleys, autobuses and underground railways, which were implemented around that time. But before then there were other ways of getting around. On the StrongTowns podcast page, Steve commented that waterways - rivers and canals - provided a transit function.

Beyond the waterways, there were horsecars. These were large, horse-drawn vehicles that ran on rails, and could carry twenty or more people at a time. These began to appear in the early nineteenth century. The London Underground ran on steam from 1863.

Mike Lydon was the only one who didn't suffer from persistent transportation myopia. Burleson said, "Imagine a European-scale city that had no transit, but also had no cars." Transit and cars - along with taxis, hansom cabs and personal horse-drawn carriages - are different ways of enabling long-distance commutes. Transit is a long-distance commuting option that is accessible to lower classes.

Cities did exist for millennia, but it's worth noting that until the nineteenth century, they were small enough that you could walk from any part of them to almost any other part within an hour. So as Erfurt observed, transit allowed cities to expand beyond that size, but so did personal vehicles. Ian Rasmussen pointed out that transit opened the city to all.

An interesting example that proves the rule is Versailles. By moving the court a long distance from Paris, Louis XIV essentially split the capital over a distance of twelve miles. To compensate for that distance, a public transit system - the "carabas" - was implemented. It covered that distance in six and a half hours at first, but by the beginning of the nineteenth century it took only two hours, and there were twenty-six round trips per day. It was not the first transit system in the Paris region - Bibliophile Jacob tells us that in the late seventeenth and eighteenth centuries there was a whole network of public coach routes linking the various suburban palaces, with the frequency adjusted to the whereabouts of the King - but it was the best developed.

On one level, Erfurt and Burleson are right and you don't need transit to have a successful walking city. But you do need vehicle commuting to have a successful large city, and you need transit to do that equitably. I commend the debaters for what they were able to do within the constraints they had, and I thank them and the debate organizers for raising a number of interesting questions, and for recording the debate for posterity.
Posted by Cap'n Transit at 12:48 AM 1 comment:

Buses and trains in Woodhaven 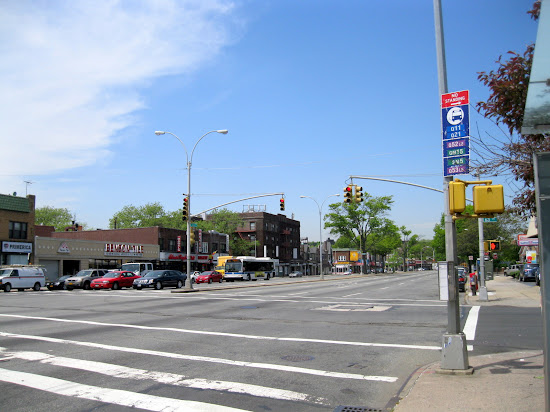 On one of my followup posts, BBnet3000 argued that the Rockaway Branch is not well enough located:

Also, most of the commercial development in this area is along Woodhaven Boulevard, which this subway kind of misses. Theres a reason subways are usually built under streets. When I ride the bus on Woodhaven Boulevard (to go to the auto-oriented Trader Joes incidentally, though Forest Park is also worth visiting) I usually think id like a better bus, rather than a train a block to the east (for what its worth, this bus seems to have pretty good ridership, and a lot of people DO ride it to the Rockaways in the summer). For the densest parts of Woodhaven its several blocks to the east and inaccessible through the private properties of the Rego crescent.

There is in fact walkable commercial development along that section of Woodhaven Boulevard from 62nd Drive to where the cemetery starts at Furmanville Road, but that's the only walkable commercial development the entire length of the boulevard. North of 62nd Drive you've got an apartment complex, a Catholic school parking lot, a deli and a park before you get to Queens Boulevard and the subway station. South of Furmanville Road you have the cemetery on one side and sprawly stores on the other, then the big-box stores, then the Montauk Branch.

South of the Montauk Branch there are a few businesses, but they are almost all located on street corners. The vast majority of commercial use in this corridor is on the avenues that cross it: Metropolitan, Myrtle, Jamaica, Atlantic, 101st and Liberty Avenues. On Woodhaven itself you see mostly houses - and a lot of one-car garages. 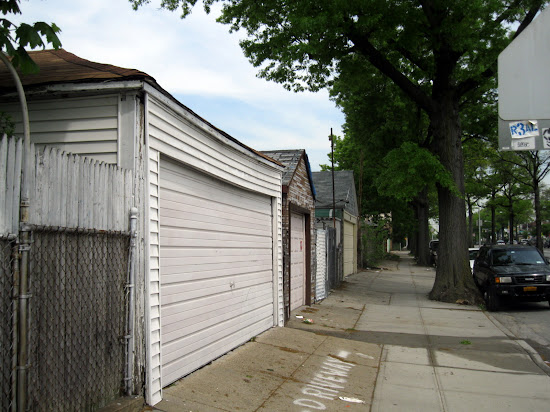 If you walk down one of those avenues, the Rockaway Branch is never far away. 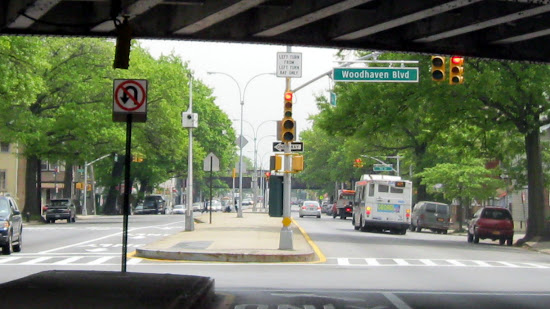 One thing to remember is that this is not just about better access to existing businesses, but enticing more and better businesses to locate there. The commercial buildings along the avenues are generally two stories, allowing for greater walkability - more shops, restaurants and offices in a small area. The ones on Woodhaven Boulevard are mostly one story, which limits their potential.

So yes, Select Bus Service would be good for the commercial stretch of Woodhaven north of Saint John's Cemetery, but a subway would be better for businesses further south in that corridor. That's why we should have both.
Posted by Cap'n Transit at 11:39 PM 6 comments: