The cargo cult of railyard decks

I recently wrote about a proposal to build a deck over the Sunnyside Yards. This got me thinking about these projects in general. I'm afraid that railyard decks have become part of what Ryan McGreal called "cargo cult urbanism," along with convention centers, casinos, "bus rapid transit" and a "High Line": things that have high-profile associations with rapid increases in prosperity, things that people latch onto when they're desperate for improvement but unable to think clearly about what will actually improve things, or unwilling to admit that they don't know.

There is always a high-profile example that does plausibly bring prosperity: the original High Line, the Transmilenio, Foxwoods and McCormick Place may well have done so. But in practice when people try to replicate its success, the promised prosperity often does not materialize. In hindsight, it turns out that the actual generator of prosperity was something else, like upzoning, or that there are diminishing returns as the desire for gambling or conventions or office space is satisfied. 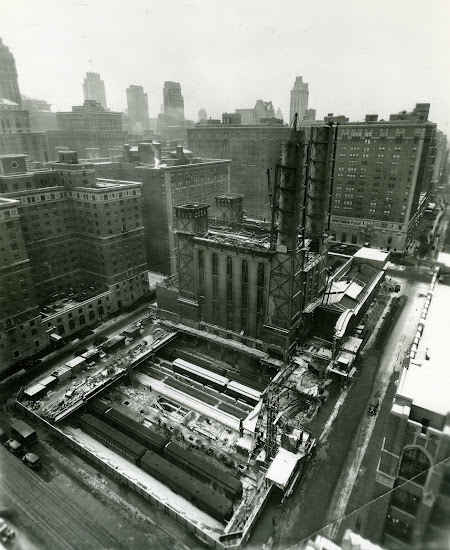 Construction beginning on the site of the Waldorf-Astoria Hotel, 1929. Photo from Waldorf Archive.
Everyone talks about how much money the New York Central Railroad made by decking over the Vanderbilt Yards in Manhattan and building office space and hotels. As the photo above showed, it didn't happen overnight: construction on the Waldorf-Astoria Hotel started more than twenty years after the Grand Central deck. There were a few other conditions as well: the Central already owned the land and construction was relatively cheap. Most importantly, the IRT subway had just been built linking Grand Central with the existing downtown and with new housing on the Upper West Side and the Bronx. There was a huge amount of pent-up demand for new office space, and the Vanderbilt Yards development made it available. It was this new availability to pent-up demand that made the buildings sell and delivered a profit for the Central.

As Stephen Smith has observed, there is currently pent-up demand for housing, but much less evidence of pent-up demand for office space, in New York City and particularly in one decking project, Hudson Yards. And as Ben Kabak reports, the new subway tunnel bringing people to the Hudson Yards is delayed and over budget. These facts in turn mean dim prospects for office towers or convention centers on future decks, including the Sunnyside Yards.

Given the market conditions that Stephen describes, I have to wonder why city officials continue to try to push commercial development on these decks. I think the reason is that unlike when Grand Central was built, developers aren’t finding private financing for decks over railyards. I would think that the financiers might have a good reason for not lending, but the city pushes ahead with public financing, such as the 50% government financing for Atlantic Yards. How does the city make back its investment? With taxes, and office buildings pay a lot more in taxes than apartment towers, even luxury ones.

Our government needs to be a lot more careful about how it finances big projects like decks over railyards. If a deck can’t be built without full private financing, the government has to have a compelling public interest to step in. That alone would cut down on some of the most unwise projects.

For the Sunnyside Yards, I'm not convinced that there is a compelling public interest in financing a deck. I'll talk about that more in future posts.
Posted by Cap'n Transit at 1:14 AM 3 comments:

When bike paths are not transportation

I've written before about the capacity of bike paths to move large numbers of people. A dedicated bike path performs this function best when it connects dense residential neighborhoods with dense job centers. The bike paths on the Brooklyn, Manhattan, Williamsburg and Queensboro Bridges are great examples of this. They may not transport as many people in a day, but they don’t transport thousands of dangerous, wasteful motor vehicles either. This is why we should convert one lane of the Brooklyn Bridge to a two-way bike path.

That said, a frequent train line can beat a bike path, or even a car lane, any day. On the Manhattan Bridge one fall day in 2012, according to the New York Metropolitan Transportation Council’s Hub-Bound Travel Study, one car lane carried almost five times as many people as the bike lane, but one subway track carried 36 times as many. 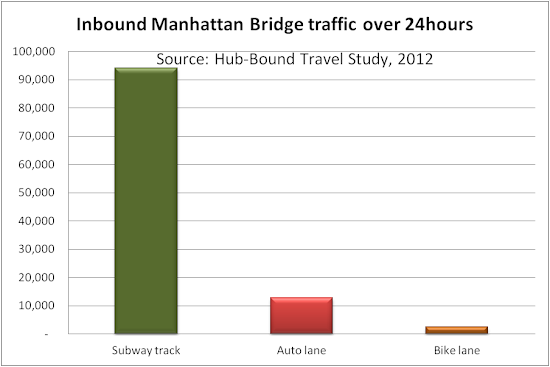 With that in mind, let’s turn to the Rockaway Beach Branch, and to a proposal to convert it to a bike trail instead of reactivating train service. The Trust for Public Land argues that it “will” (not “could”) fulfill a similar transportation function:

Yes, that’s nice, but how many of them would actually use it? I could save ten to fifteen minutes off my commute by biking to the subway station, but I don’t do it because there’s just a plain rack to lock it to. There is no secure bike parking at any subway station near me, and there is none proposed in the trail plan.

Even assuming that secure parking was built, or that every potential bike commuter was comfortable locking their bike up at a plain old rack (and that the city built enough additional plain old racks to accommodate them, how many cyclists are we talking about? I’m guessing it would be far below the 2,601 cyclists that the NYMTC counted on the Manhattan Bridge on that fall day in 2012.

Now let’s assume that instead we brought trains back to the Rockaway Beach Branch. Let’s assume that the service is the crappiest possible: less than once an hour off-peak and a mandatory change to get to Manhattan, like the Long Island Rail Road Oyster Bay Branch. We would still get at least 3,350 riders a day (PDF).

If instead we dug a tunnel under a few blocks of Rego Park and ran the R train out to Howard Beach, we would see a lot more riders. Even if there were only four stations and all of them had the ridership of the 104th Street station on the A train (1,736), that would still be almost 7,000 riders a day. The least popular station on the R train, 36th Street in Long Island City, saw 4,540 riders last year, and I’ve proposed adding stations at Myrtle Avenue and Fleet Street to serve large buildings that were built since the line’s fortune declined. The half million riders heralded by some rail proponents may be too ambitious, but even if the line is a dismal failure it would serve far more people per day than a trail.

If you’re still thinking of the bike trail as a transportation project, look at this quote from the Trust for Public Land:

To ensure safety and security for neighbors and park users, the QueensWay will have gates at all entrances. The QueensWay will close at dusk except during winter months, when it will remain open slightly later to accommodate commuters.

(I’m pretty sure that last part about remaining open slightly later was added after I tweeted about this.) The bike paths on the Brooklyn, Manhattan, Williamsburg and Queensboro Bridges are open twenty-four hours. That’s because they’re transportation infrastructure, not parks.

Decking the Sunnyside Yards: the history of a fantasy 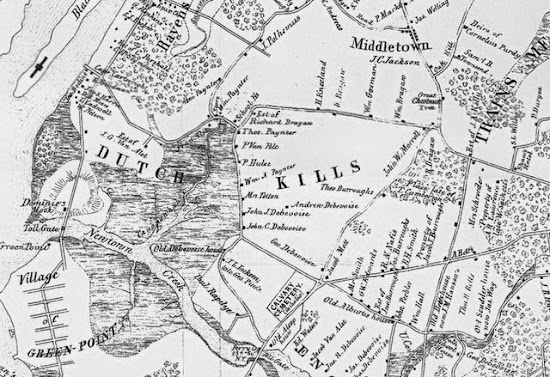 1643: Burger Jorrisen receives the first patent for farmland near the swamps surrounding the Dutch Kills.
1861: The Long Island Railroad builds tracks from Hunters Point along the Dutch Kills to Jamaica.
1903: The Pennsylvania Railroad begins purchasing property in the area and draining the land.
1915: The Sunnyside Yards are opened.

(Background from the Greater Astoria Historical Society and Untapped Cities, among others.)

Development proposed on decks over the Yards:

Ben Kabak tweeted about a new proposal from something called Woods Bagot to open up Penn Station to sunlight by removing the theater under Madison Square Garden: 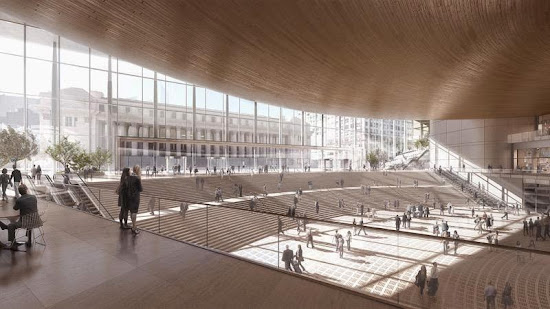 For many years I've argued that the "Moynihan Station" proposal contained at least two major design flaws that nullified any improvement to passenger circulation: it has lots of steps, and it's west of where most people want to go. Woods Bagot pays lip service to Moynihan Station proposal, but I would hope that this helps people realize they don't need to use the Farley Post Office to bring light back into Penn Station. Since they talk about "wrapping around" Madison Square Garden, I hope it will also deal with the atrocious pedestrian conditions above Penn Station: 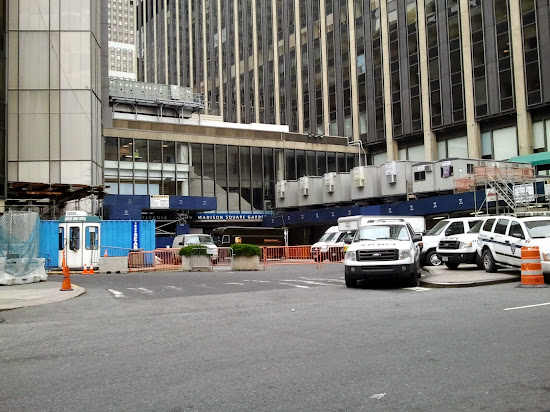 Of course, there is one major drawback to the proposal: it's a wonderful vision for increased mobility, but it's not Pat Moynihan's vision, and may fail to adequately glorify our late Senator.

But wait! The proposal also mentions that "a new location for the well-used theater is unresolved." I've got the perfect place: the old Farley Post Office across the street. And you know what else we could put there? Buses! 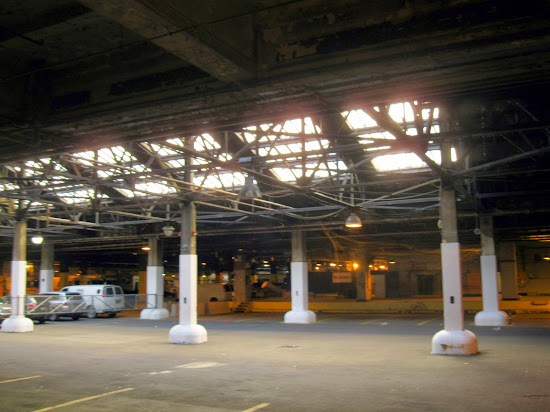 We know that there's a shortage of places to catch a bus in Manhattan, particularly near the Lincoln Tunnel. Meanwhile, good terminals are critical to efficient hub-and-spoke bus networks, but our elected officials would rather pander to private car owners. There is a lot of space (with skylights!) inside the old building where the postal trucks used to go, and more along the sides: 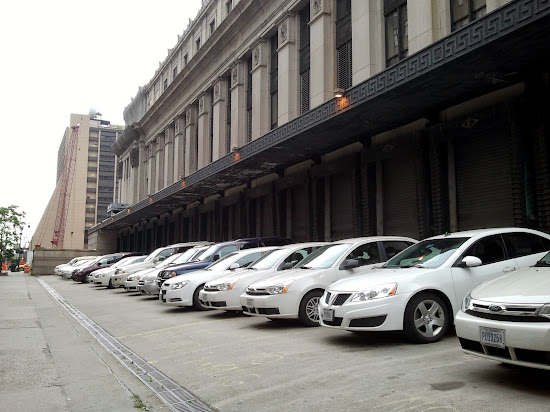 You could even build a flyover across Eighth Avenue, or maybe even an underpass next to the train tracks, if you wanted to spend some money. Back inside, there are big open spaces for concourses: 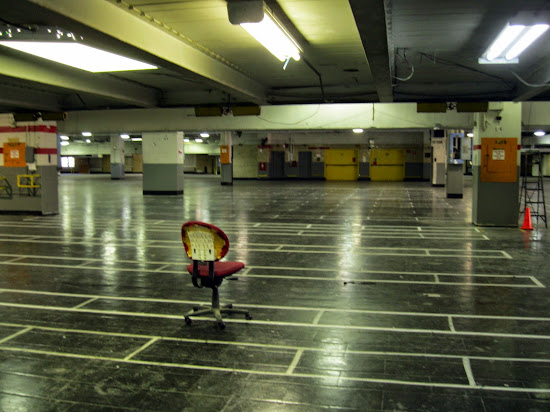 Two of the biggest annoyances for transit advocates are the Moynihan Station fans with their desire to build a giant sculpture and tell us it's a functioning train station, and "Bus Rapid Transit" pushers who tell us that trains are wasteful luxuries for white people and we should be spending all the government money on buses. I've always argued that the Lincoln Tunnel XBL is the most effective form of bus rapid transit in the country. If we call this the Moynihan Bus Rapid Transit Station, maybe we can get both of these groups together to build a gorgeous temple for bus riders to enter the city like gods.
Posted by Cap'n Transit at 1:23 AM 7 comments:

The problems with the yards

I live in Woodside, Queens, not too far from Sunnyside. I love both neighborhoods, but there are a few problems. Recently, urban planners and some of my neighbors have focused on a few in particular: 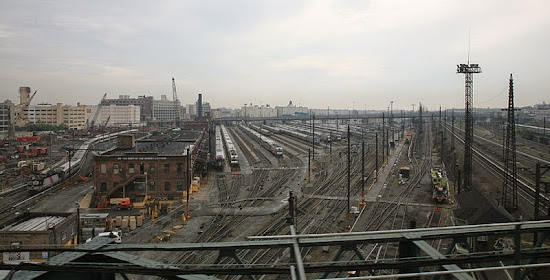 Photo: Daniel Schwen / Wikipedia
The planners have been talking for years about addressing these problems by building a deck over the Sunnyside Yards, but my neighbors are afraid of seeing our infrastructure and services overloaded. I'm concerned that there will be too much parking, and that whatever benefit we get won't be worth the cost. I'm pretty sure there are better solutions to these problems. I'll talk more about the proposals and concerns in future posts.
Posted by Cap'n Transit at 1:15 AM 4 comments: