Back in October, City Council Transportation chair Ydanis Rodriguez argued that some of our identically-named subway stations really are confusing and should be changed (see the full report in PDF. In general I agree; the worst are those that are on the same line in different boroughs; back when there was a 23rd Street-Ely Avenue stop in Queens, I helped a poor recent arrival on the V train who got it confused with 23rd Street and Sixth Avenue in Manhattan.

I like how in Paris every station has a unique name, and that's part of the navigation system for the city: directions regularly include the name of the nearest Metro station. Of course that's because Paris has no grid, and grids actually make subway station naming kind of boring: do we really want stops called 23rd-Park, 23rd-Broadway, 23rd-Seventh and 23rd-Eighth?

On the other hand, I also agree with Ben Kabak that the names proposed by Rodriguez's staff are not great. They're not as bad as the DC Metro with stations like Archives-Navy Memorial-Penn Quarter, but they're still too long. I'm going to take them one at a time:

We need to stop converting streets to one-way

New York is famous for its livable streets revolution, where Janette Sadik-Khan, with the backing of Mayor Bloomberg, turned the city Department of Transportation from an agency focused on moving traffic and placating angry drivers into one that prioritized the safety and movement of pedestrians, cyclists and bus riders. Under Sadik-Khan the DOT took away some car lanes and narrowed others to install pedestrian plazas, protected bike lanes and bus lanes. 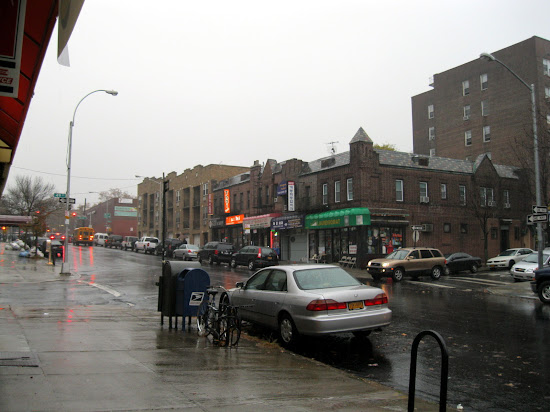 Under Mayor de Blasio and his transportation commissioner Polly Trottenberg, the DOT has shown more timidity and more deference to unelected "community leaders," but it has continued to install safety measures and bus lanes, sometimes taking space from cars to do it. Where neither administration has been very good is on one-way streets. It's pretty uncontroversial that one-way streets have less head-on collisions. It used to also be the consensus that they are safer for pedestrians. Instead of looking for cars from two or even four directions, people crossing a one-way street only have to look in one or two (or maybe three, but who's counting?).

More recently, people have come to realize that the old consensus was too simple. Removing most of the danger of head-on collisions only encouraged people to drive faster, increasing the danger of other collisions. Drivers have to drive further to get to their destinations, adding to congestion and turning moves.

One-way streets have also had a negative effect on street life. The difficulty of navigation, and the difficulty of parking next to speeding cars, have discouraged drivers from patronizing businesses on one-way streets. The danger, noise and unpleasantness of speeding cars have discouraged walking. Stores and restaurants have closed, giving people less reason to walk. This is a vicious cycle, because just the absence of other people drives pedestrians away.
New York was an early leader in the movement against converting streets to one way. In fact, it was a plan by the City Department of Transportation to funnel cars into the Barclays Center that demonstrated the livable streets movement's growing power. Stirred by a series of Streetsblog posts, 650 people came out to speak against the DOT's proposal to convert Sixth and Seventh Avenues in Park Slope to one way.

Since then, other cities across the country have converted one-way streets back to two way. The size of the crowd was probably a factor in Mayor Bloomberg's decision to appoint a reformer like Janette Sadik-Khan as Transportation Commissioner. With the support of Streetsblog and Transportation Alternatives, and against the opposition of community boards dominated by local driving elites, the DOT rolled out bike lanes, pedestrian plazas and intersection redesigns to make streets safer.

The odd thing is that as far as I know New York has not converted any one-way streets back to two-way, either before or since 2007. I haven't heard anything about the issue from Sadik-Khan, Streetsblog or TA. The architect John Massengale wrote about street safety last month and even spent a paragraph talking about the dangers of one way streets, but for some reason did not explicitly include returning the streets to two-way in his list of recommendations.

What is even more surprising is that since 2007 the DOT has continued to convert streets from two-way to one-way. For example, under Sadik-Khan they converted 49th Avenue in Long Island City and 58th Street and Maurice Avenue in Maspeth to one-way. Under Commissioner Trottenberg, they have converted Fifth Street in LIC, and have proposed converting 77th Street in Jackson Heights (PDF).

To be fair, these streets are not like Sixth and Seventh Avenues. 58th Street and Maurice Avenue are industrial truck routes, and 49th Avenue and Fifth Street are primarily residential. Both are in areas with higher car ownership rates. These factors can explain why livable streets advocates didn't notice or draw attention to the conversions.
But those factors don't mean that we shouldn't try to stop these one-way conversions, and they don't mean we shouldn't talk about them. People need to be safe where they live and work, not just where they shop. These neighborhoods have a lot of pedestrians, and we need to protect them from the demands of the driving elites who dominate their institutions.

By the way, this applies to narrower streets too.
Posted by Cap'n Transit at 1:02 AM 13 comments: