A while back I was arguing with someone about "Bus Rapid Transit," and they suggested that New York should emulate the system used in Bogotá. I was skeptical; I've read about the Transmilenio and seen the Streetfilm, It didn't seem a good fit, but I felt like I didn't know enough. 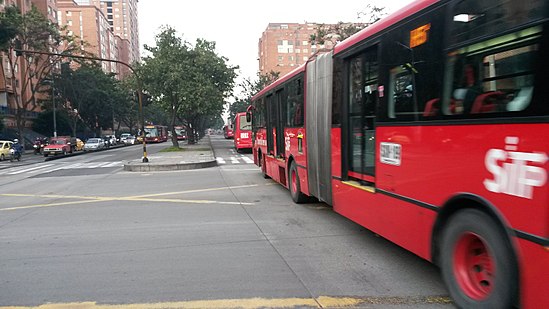 The Avenida Caracas is 120 feet wide. Photo: Peter Angritt / Wikimedia.
I haven't been to the Colombian capital, but I've now looked at the network in more detail, and its applicability to New York area is extremely limited. Implementing anything resembling a Transmilenio corridor without converting general driving lanes to busways would require taking large amounts of land that is currently used for housing, retail or industry. I just don't see that happening on, say, Northern Boulevard or Church Avenue, and I don't want to see it happen.

The twelve Transmilenio corridors (not including the Carrera 7 stub) range from four to eight miles long, and are either at-grade or depressed, rarely elevated. They are all anchored by either the downtown or by a connection to another Transmilenio corridor. They fall into three types, as follows: 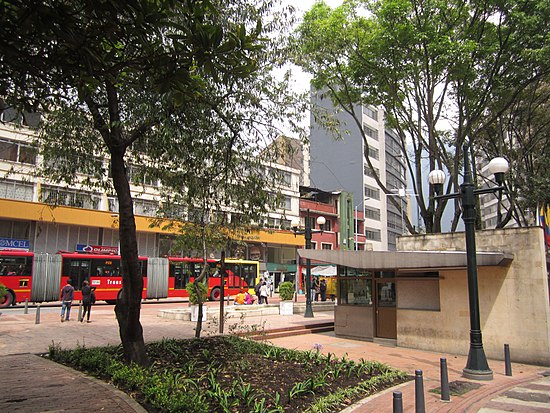 Photo: Felipe Restrepo Acosta / Wikimedia.
There is one corridor, the Eje Ambiental, that is roughly sixty feet wide. It could be emulated on any street of that width, like Fulton Street or Bergenline Avenue. I'm not going to consider those here, because they're everywhere.

Four corridors have sidewalks and at-grade crossings, like the Avenida de Caracas (see above); I call them Arterials. They have four to six lanes of car traffic and sometimes a bike path, and range from 120 to 150 feet wide. 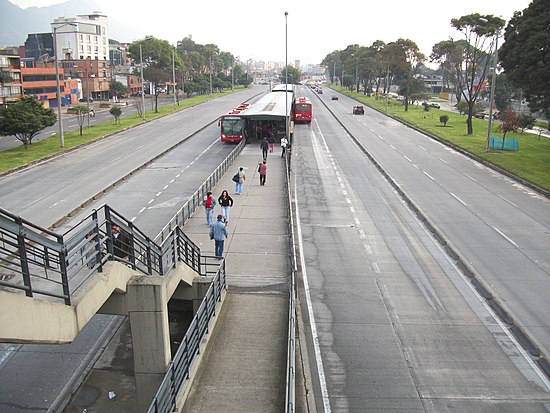 The Autopista Norte is about 350 feet wide here. Photo: Felipe Restrepo Acosta / Wikimedia.
The other seven corridors have grade-separated crossings, and at least some of the car lanes are limited access, like the Calle 26; I call these Highway corridors. The corridors can be up to 450 feet wide and include six to twelve car lanes and sometimes a bike path or even two. There are planted medians and sometimes even parks in the medians.

With this in mind, here are the basic criteria for Transmilenio-style corridors:I will add the following for this exploration of New York, in keeping with our principles (see above):I am not making any attempt to forecast demand in this post, aside from restricting my exploration to New York City and the counties closest to it. If you do try to think about demand, keep in mind that demand is not static, and it responds to the availability of alternatives.

One thing that surprised me looking at the Transmilenio system was how many of the lines (seven out of twelve) are the "highway" type, with separated local and express carriageways and any retail or housing set back from the sidewalks (almost all of them have sidewalks, which is a lot more civilized than most of our highways here). But when people (like the person I was arguing with) talk about adopting Transmilenio designs in New York, they're almost always talking about arterial corridors within the city limits, so that's what I'm going to focus on for this post.

So, are you ready? Here they are, all five of them! 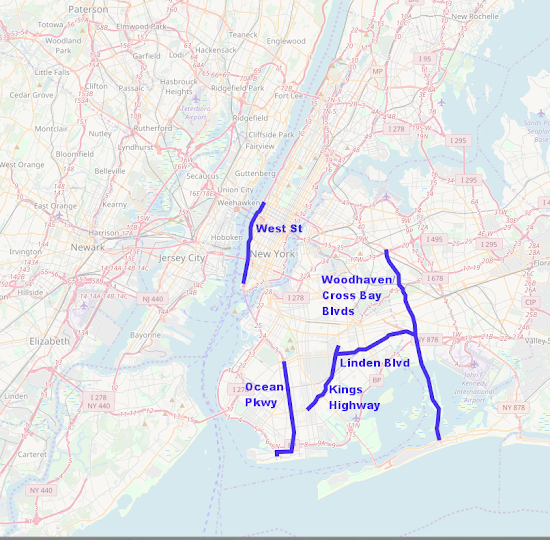 The thing about arterial corridors in New York City is that we don't actually have very many that fit the Transmilenio model. We have a lot of big, wide avenues that feel dangerous, but when we actually measure them it turns out most of them are only a hundred feet wide, like Church Avenue in Brooklyn or Gun Hill Road in the Bronx. Even Astoria Boulevard in East Elmhurst is only 120 feet.

The remaining Arterial corridors do not form a coherent network at all in the five boroughs. They don't even extend the subway network, because stroads like Kings Highway and Linden Boulevard only widen to Transmilenio widths half a mile or more from the subway. The best you can say is that some of them would provide new routes parallel to crowded lines, like West Street.

The most promising corridor is Woodhaven Boulevard. The City has finally succeeded in upgrading it to Select Bus service, but they never proposed Transmilenio-style high island platforms. They tried to get separated center lanes, but after a long, hard fight with motorists and bean counters they settled for converting some of the inner express roadway to dedicated lanes with median boarding.

Woodhaven is also paralleled by the dormant Rockaway Beach Branch of the Long Island Railroad, which would have much more capacity and be somewhat better located. If the Rockaway Branch is ever reactivated, a Transmilenio-style busway would just add capacity to that, the way an Ocean Parkway busway would add capacity to the F and G trains a few blocks away on McDonald Avenue. Not a bad idea, but not the transformative change promised by some people.

Does that mean there's no application for Transmilenio-style busways in New York? Not quite; things actually look a lot more promising in the suburbs. Stay tuned for that!
Posted by Cap'n Transit at 2:05 PM 3 comments:

Email ThisBlogThis!Share to TwitterShare to FacebookShare to Pinterest
Labels: brooklyn, bus, land use

Who's your Suburb Buddy?

Adam Hengels had a good post about fighting rising rents back in 2015. He points out that while "gentrification" battles are almost always fought on the neighborhood level, the problem is actually regional:

The battlefield is not in the gentrifying neighborhoods. It is in the more wealthy neighborhoods where empowered residents fight to keep new people out. 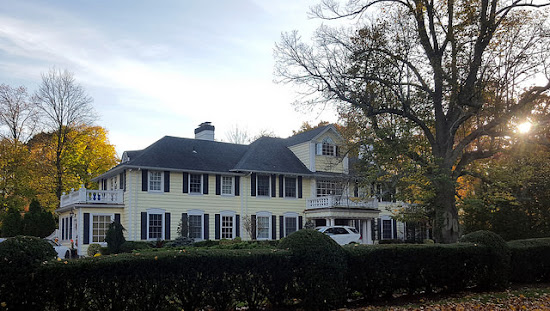 Hewlett Bay Park. Photo: Paul Seligman / Flickr.
There are tons of pretty suburban towns, and even small cities, that could be cozy, hip, dense alternatives to Manhattan or Brooklyn, but they've got zoning that keeps apartment buildings out and stifles nightlife, giant parking lots surrounding the commuter rail stations, infrequent train service and parking requirements that drive foot traffic away. If they got their act together, a lot of people would be moving there instead of here.

Here's an example: I live in Woodside, Queens. Per capita $24,399, population density 44,500 per square mile. We've got a decent commute to Manhattan (30 minutes to Grand Central), and a nice mix of shops and restaurants (a Walk Score of 94). I'd be happy to have more people here, but if they went someplace else that'd be okay too.

If I walk down to the Long Island Railroad station, I can get a train to Hewlett and take a short walk to the village of Hewlett Bay Park, which Wikipedia lists as the wealthiest per capita place (city, town, village) in the New York metro area at $113,320. Hewlett Bay Park has a population density of just 1,382 people per square mile, and a Walk Score of 42. It's an hour and thirteen minutes to Grand Central: a beautiful walk to the LIRR Far Rockaway Branch station, then change at Penn for the 3 train to the Shuttle.

The population of Hewlett Bay Park is estimated at 437 people, which is about a third the population of my co-op. Their zoning requires that every building be built on a minimum lot size of one acre, which is about a third the size of the lot my co-op is on. If the whole village were the same density as Woodside, it could hold about 17,800 people. Think how rents would go down across the metro area!

Last year we had a huge fight over a ten story building that would have added about 200 units to the neighborhood. That building would have fit on a single one of Hewlett Bay Park's 256 acres. Or if Hewlett Bay Park allowed townhouses near the train station, those 200 units could be spread across ten or twenty acres. My neighbors and I couldn't agree on whether we wanted it here, but I'll bet none of them would have been energetically opposed to putting it in Hewlett Bay Park.

Of course it's unfair to put all the burden on Hewlett Bay Park for accommodating the million or so people who want to live in New York. Right next door is Hewlett Neck, per capita income $88,049, population density 766.2 per square mile. There are a bunch of other wealthy villages and towns that are keeping people out with exclusionary zoning.

The second reason people don't fight Scarsdale is fragmentation. There are lots of wealthy, exclusive suburbs that are keeping people out who then chain-bid my mom's rent up. Why blame Scarsdale for my troubles and not Bronxville? How do I pick one?

It might be possible to do some kind of multilayered market research and find out exactly which set of racist NIMBYs to blame for the migration into your neighborhood, but that's probably not worth the trouble. We can do this quasi-randomly, keeping to a set of basic principles:


With that in mind, here are the ten places in the New York area with the highest per capita income where Google Maps gives a transit commute time to Grand Central, with their densities and their walk scores. Next time your local NIMBYs come out in force against a building, pick a town from this list. I've already claimed Hewlett Bay Park for the people of Woodside, so spread things out by picking a different town. If you've already heard someone else using a town, pick a different one. If they're all taken, pull up the next twenty. Make a bunch of buttons saying WHY ISN'T THIS BEING BUILT IN DARIEN? and hand them out. Let's see what happens!