The long game in transit advocacy

While I generally appreciate other transit activists, I’ve criticized plenty of them in the past. Recently I’ve figured out what it is that bothers me most: a lot of them are playing a very short game.

They’re playing up routing improvements and park-and-rides as long as they don't inconvenience drivers, supporting billions of dollars for new roads in exchange for supporting millions of dollars for new buses, promoting a car bridge with the hope of getting a bus lane on it, ignoring existing plans for new subway lines and demanding inadequate bus route plans, complaining about wasteful transit projects with only the barest mention of bloated highway budgets, and declaiming Our Nation's Rotting Infrastructure without setting any priorities for what gets repaired or rebuilt.

All of these strategies reveal an impoverished vision of the world. In this vision, if there is economic equality it means everyone driving to the health food store in their own personal Subaru Wagon – or everyone commuting to work in a packed Transmilenio bus. Wasteful comfort or cheap discomfort.

Usually, the vision is not even that complete. The short game players simply assume that the world will always be dominated by drivers who monopolize the money and the space. Their vision is not compatible with a future where the vast majority gets around by transit. They have no way of dealing with their own success.

What would real success look like? It's not a reworked bus network. It's not an abundant supply of the latest buses. It's not one lane for buses and eight lanes for cars and trucks. It’s not a train tunnel and a highway bridge being built simultaneously with the latest efficient methods. It’s a world where personal motor vehicle use is minimal, and public transit is abundant, safe, comfortable and reliable. 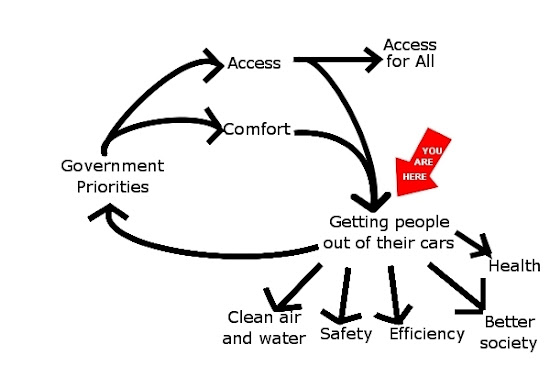 We have to be prepared to put that vision into practice, and that means taking the long view. It means doing some things that may seem inefficient now, but that will pay off in decades. It means taking advantage of the transportation cycle. It means pushing cost-cutters to cut roads, even if that upsets some potential short-term allies. It means pushing big spenders to spend big on transit, even if they waste billions in the process.
Posted by Cap'n Transit at 12:46 AM 7 comments: