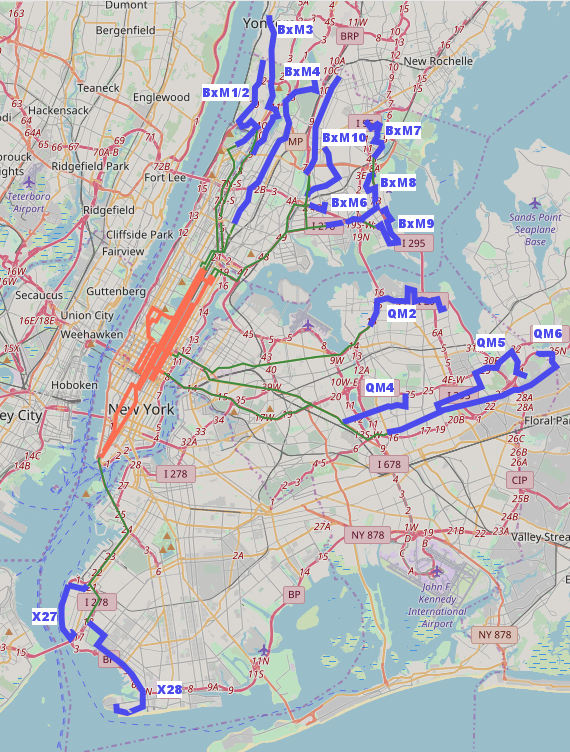 Express buses are easy in New York City. Just walk over to your express bus stop at the usual time and wait. Eventually the bus will arrive, you get on board, pay, find a seat and relax. When you're getting close to your stop, push the button, the bus stops, and you walk to work. Now they even have BusTime and MetroCard!

Express buses are easy if you're a regular passenger, that is. If you're not, how do you know which bus to take? You look at the complicated bus map for your borough, not posted in any subway station or bus shelter. Except if your borough is Manhattan. All the express buses are designed for trips to and from Manhattan, but the MTA doesn't show any express buses on the Manhattan bus map.

So you look at the bus map for the borough that's not Manhattan in your trip and figure out which bus is passing closest to the stop in that borough. Find the schedule for that bus. It may be posted on the stop, it may not, but the schedule is critical.

The schedule has tables telling you whether there is a bus scheduled to leave when you want to leave, and when it is scheduled to arrive in Manhattan. Everything besides the original departure time is approximate, and the buses almost always get stuck in traffic, so be prepared to board up to half an hour late depending on how close you are to the origin, and to get to your destination up to an hour late. Be sure to check BusTime so you know whether the bus is even coming.

The schedule does tell you where the buses stop in Manhattan. There used to be buses with suffixes after the route number (or not) indicating whether they stopped on Third Avenue or Downtown instead of Sixth Avenue, or maybe other routings, but the MTA has been gradually reorganizing them into separate numbers.

One key bit of information that's in the schedules but not the borough bus maps is where the buses stop and where they go express. It may seem obvious because most of the buses go on expressways, but some of them stop on the service roads of those expressways, and some don't. A few stop on Queens Boulevard or Woodhaven Boulevard, but most don't.

The biggest thing that would make these maps easier to read is not showing extra information. Outside of Staten Island, where a bus network redesign is being implemented this summer, there are fifty express bus routes in the city. Almost half of them run only on rush hours, in the peak direction. Only sixteen of them run seven days a week. So if you're looking for an express bus on a Sunday you don't need to see the QM44, the X63 and the BM5. The resulting map is much cleaner.

That said, as I've written before, it's crazy not to offer Sunday service everywhere. When the Department of Transportation first started subsidizing private companies like Green Lines, they should have made funding contingent on seven day service. When the MTA took over their operations it should have immediately instituted Sunday service wherever there was Saturday service. Running buses on Saturdays and not Sundays is religious discrimination, and it has no place in New York City.

I'll have more to say about this map in the future.
Posted by Cap'n Transit at 10:48 PM No comments: