The American Action Forum recently released a critique of “Buy America” laws on the basis that they place undue hardship on transit agencies and set a ceiling on the quality of the equipment they use. I’m not one to put a lot of trust in Republican think-tanks, but I’ve heard similar critiques from transit advocates across the political spectrum. 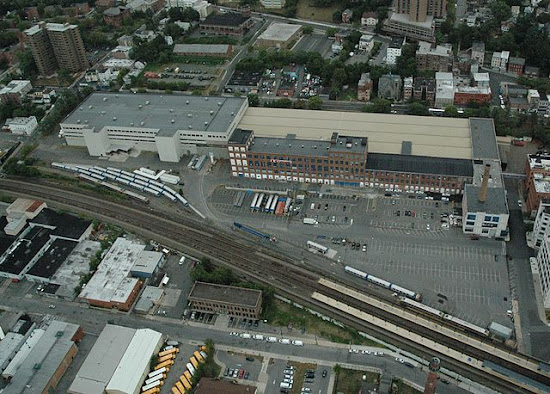 Kawasaki Heavy Industries, Yonkers. Photo: Sconnick / Wikimedia
The idea of "buy America" is initially appealing, especially when you hear about the horrendous conditions in sweatshops overseas. But there are lots of European and East Asian companies that have better working conditions than you find in factories in the United States. In fact, the “American” trains are frequently assembled in the US in a factory owned by one of these companies, out of parts produced by factories in other countries owned by the same company.

The main argument for "buy America" in transit that holds up to any scrutiny is the idea of maintaining or boosting our manufacturing capability. Because of "buy America," there are American citizens in Plattsburgh, Yonkers and Portland who know how to make trains. If the market grows again some day, there may be enough business for an American company to hire some of these workers and go into competition with Bombardier, Kawasaki and Alstom.

Another argument is that manufacturing transit locally builds the constituency for transit. People who might never ride the subway fight for subway funding, because they build the subways. This is potentially valuable for New York, where our tax money is regularly diverted to road building under the guise of "parity for upstate."

Unfortunately, that potential rarely seems to work out. It’s impossible to tell which legislators supported what project and which ones opposed it, because they do everything in secret. But the bottom line is that these plants have been running for decades and our transit systems are underfunded every year by the Legislature. 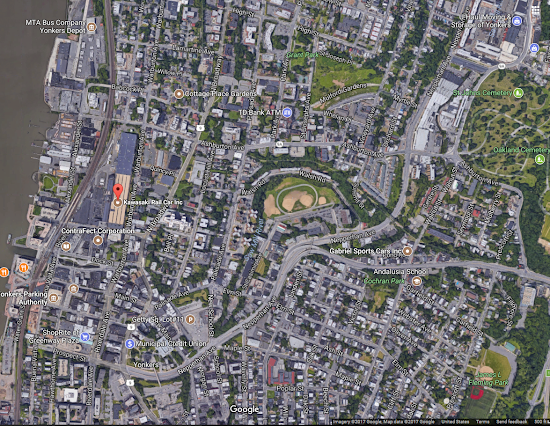 Whenever I take the Hudson River Line I like going past the Kawasaki factory in Yonkers. Here’s a former Otis elevator factory making trains for the New York Subway that’s only a few miles from the subway itself. More importantly, it’s walking distance from home for many low-income workers, and a short transit ride for millions. 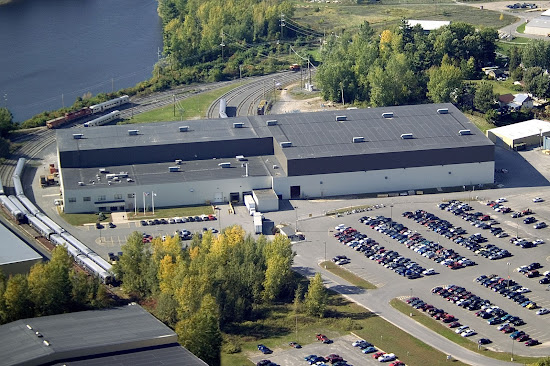 Bombardier Transport, Plattsburgh. Photo: Bombardier
Contrast the walkable downtown Kawasaki factory with the Bombardier factory built in the 1990s on a decommissioned Air Force base in Plattsburgh. This is an unpleasant forty-minute walk from downtown, and relatively few people live nearby. 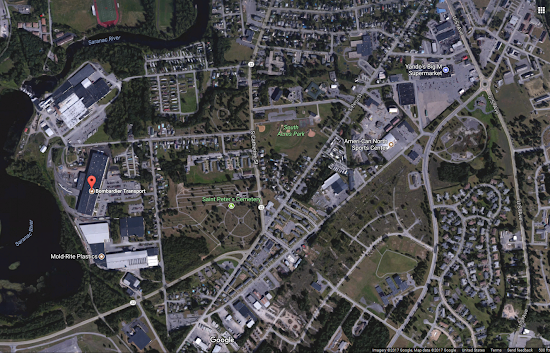 There is a bus that runs hourly and stops outside the plant, but it runs in a circle, so the trip back takes forty minutes. I’m guessing the vast majority of workers drive. 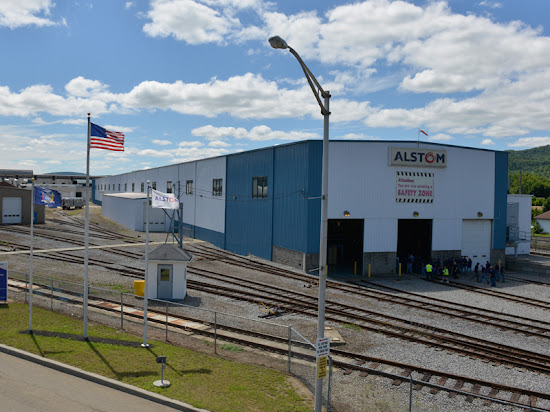 Alstom Transport, Hornell. Photo: Alstom
The Alstom plant in Hornell, where the new Acela train cars will be assembled, is a bit better. It was built by the Erie Railroad in the nineteenth century, so it was built to be walkable. 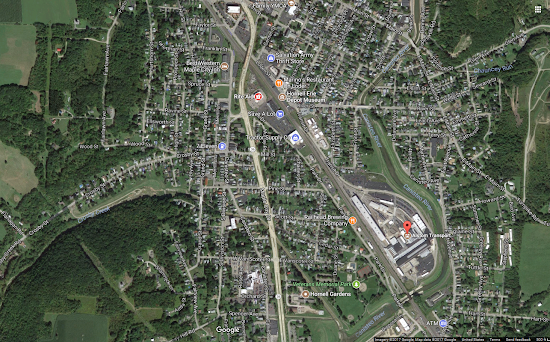 But Hornell has no passenger train service, and it is served by only one bus a day to Rochester, and another going back to Elmira. At least Plattsburgh has nine buses a day to Albany, plus daily Amtrak service. 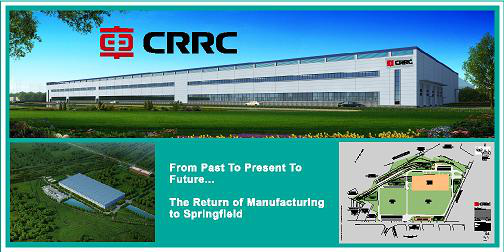 Rendering of CRRC factory currently under construction, Springfield, Massachusetts. Image: CRRC.
The new CRRC plant in Springfield where they'll be building the new MBTA cars looks like it'll be super sprawly and unwalkable from the renderings. 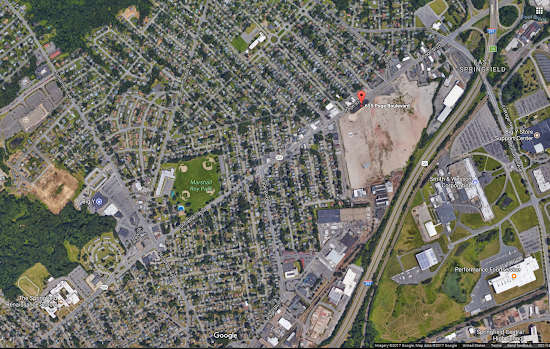 But if you check out the location on Google Maps it actually looks much better: twenty minutes from downtown on the G2 bus. On the other hand, Siemens's plant in Sacramento is sprawly and a twenty minute walk from the nearest bus stop: 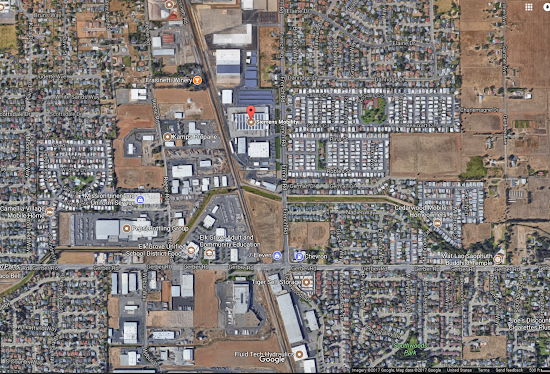 Kawasaki may have built a very walkable and transit-oriented plant in Yonkers, but their plant in Lincoln, where the new WMATA subway cars are being built, is out in the cornfields near the airport, a 35-minute walk from the nearest bus: 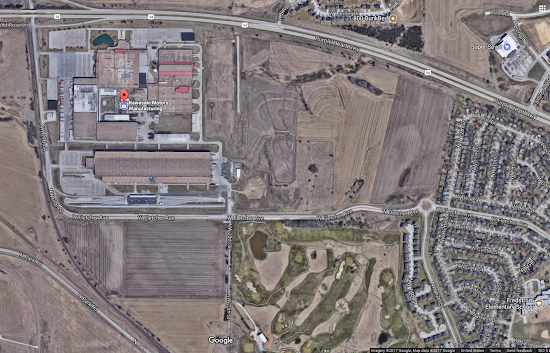 Even the Hitachi plant in Medley, Florida, where the trains for the Miami Metrorail are made, is almost two hours from downtown Miami, including an hour by bus from the nearest Metrorail station in Hialeah and then a half hour walk: 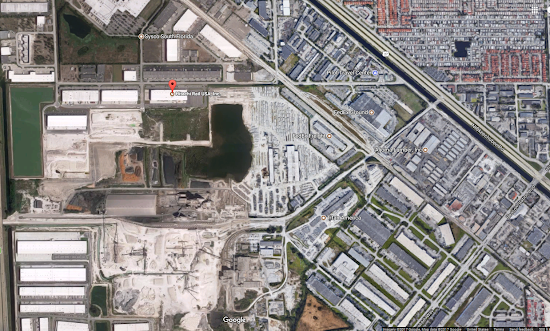 So you might have noticed that we're fighting for money to be spent on transit, and it goes to pay people who never take transit, and in many cases couldn't take transit if they wanted to. And what if we didn't have Buy America? Well, notice that all these companies are headquartered in other countries? Some of the manufacturing (and in some cases, most of the manufacturing) is done at plants owned by the same company and located in other countries. 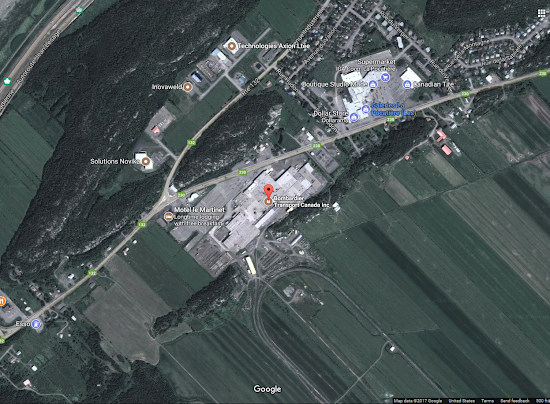 In the case of Bombardier, many of New York's subway cars are made at this old snowmobile plant 87 miles north of Québec city, with no bus or train service. 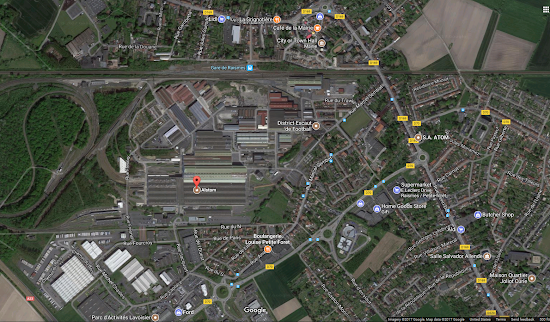 On the other hand, the main Alstom plant in Valenciennes, France is a half-hour by tram from the main Valenciennes train station - which has multiple trains per hour to Paris, including the TGV. 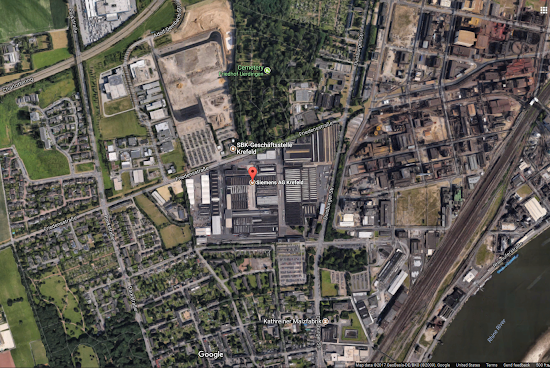 And the Siemens plant in Krefeld in densely populated Westphalia, is a half hour by commuter rail and bus from the main Krefeld train station, with frequent service to Aachen, Duisberg, Cologne and even Mönchengladbach, wherever that is. 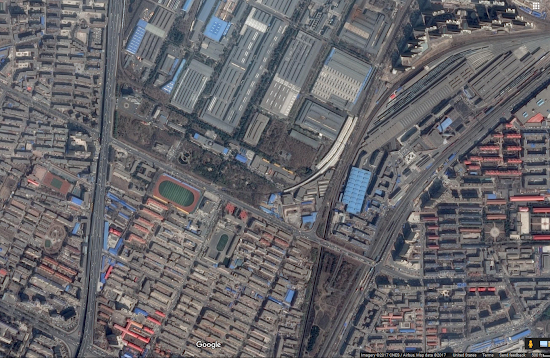 The CRRC factory in Changchun is forty minutes from the main train station. 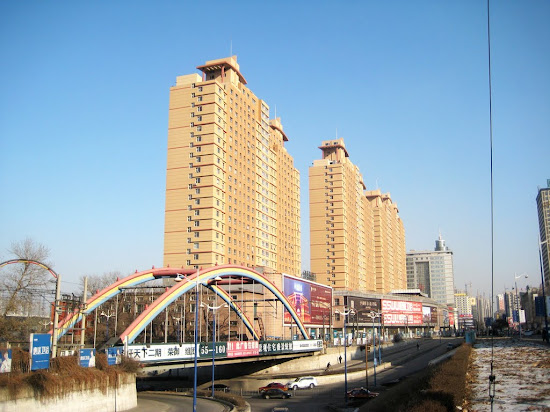 Photo: wanghongtao999 / Panoramio
More importantly it's surrounded by hundreds of high-rise apartment buildings, any one of them big enough to comfortably house a sizable chunk of the workforce of these American factories. 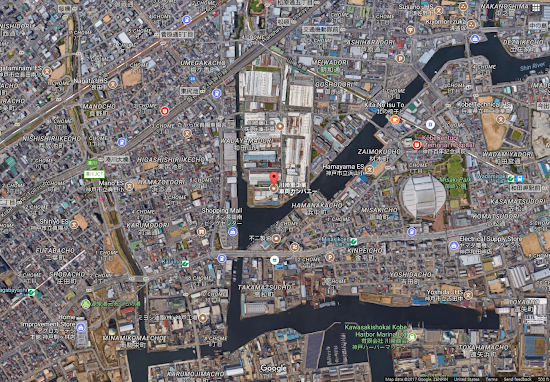 And finally, take a look at Kawasaki's main plant in Kobe, less than twenty minutes on foot from the main high-speed rail station, right near the harbor. 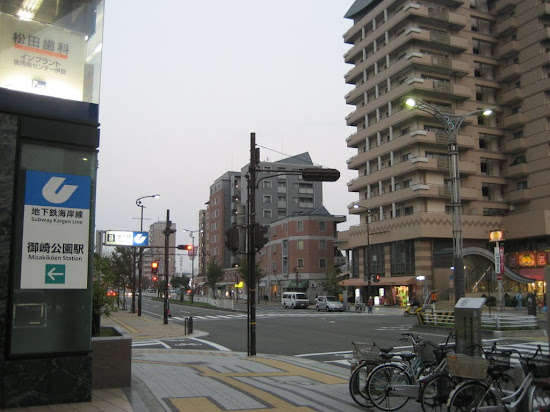 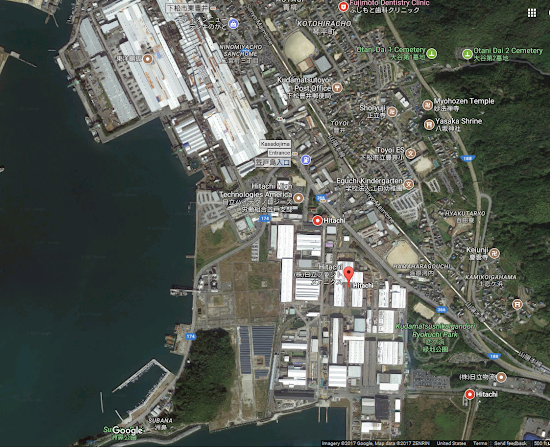 The Hitachi Kasado plant in Kudamatsu is slightly sprawlier, but still a short transit or walking commute for thousands of workers.

Ordinarily this would not be such a big deal; we're talking a few thousand people total, out of millions of car drivers in North America. But if we're counting the number of vehicle-miles traveled eliminated by the purchase of these trains, we need to subtract the vehicle-miles traveled by all those workers.

The other factor is that these contracts are sometimes presented as a way to build electoral support for transit outside of cities. This may be purely a transaction on the electoral level: a legislator votes to fund the transit agency capital plan, and the agency provides jobs in the legislator's district that they can take credit for. But what happens then? How many train cars does New York need? How long will these legislators keep up their end of the bargain? And what happens when the desire of their sprawl-living, long-distance-driving constituents for more and bigger roads conflicts with the needs of transit users (as opposed to transit agency managers)?

I've already made the case that cutting road and parking budgets can often do more to achieve our goals (see the top of the page) than spending more money on transit. Combine that with the fact (documented by the AAF in the report I mentioned at the beginning) that with Buy America our rail car budgets buy only 75% of what they would otherwise, and they encourage people to drive, what are we really getting for our tax dollars?
Posted by Cap'n Transit at 5:21 PM No comments: