What if Amtrak cared about its Hartford riders?

Welcome to another installment of our "What if?" series, where we ask what would happen if the people who ran our transit system treated it as an essential service that people relied on, rather than a luxury or a charity. In the past we've asked what if New York City Transit gave a shit about passengers at the Smith/9th Street subway station, riders on the #7 train from Woodside to Flushing or the M6 bus, Rockaway subway riders, subway riders in general, or the riders of any bus with onboard fare enforcement. 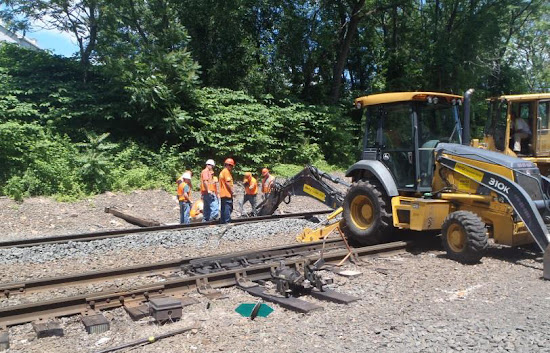 Digging cross track at HART Interlocking in Hartford, July 29. Photo: ConnDOT.
I've also asked what it would look like if the NYPD traffic brass cared about pedestrian safety, if the LIRR cared about people going through Jamaica, and if New Jersey Transit cared about transit riders or were interested in attracting new riders. I've gone further afield and asked what if the Port Authority of Allegheny County cared about people who want to get dahntahn.

But several of my "What ifs" have been about Connecticut. What if Amtrak cared about riders between New York and Boston crossing the Thames River east of New London, or the Niantic River west of the town? What if Amtrak and Metro-North cared about people traveling between Fairfield and Bridgeport?

Tonight the question is: what if Amtrak and the Connecticut DOT cared about riders between New Haven, Hartford and Springfield? The Hartford line has been neglected since the demise of the Penn Central, and one track has been removed for much of its length. It was treated by Amtrak as part of the Northeast Corridor, and several of the trains from New York and Washington used to go north to Springfield. Some even continued east from Springfield to Boston on the former Boston and Albany main line. When Amtrak introduced the Acela Express service and upgraded the Shore Line through Providence, it rerouted almost all the trains along the Shore, with four connecting "shuttles" running from New Haven to Springfield.

Amtrak and ConnDOT are working on improving service, which means they care, right? The AP says, "Work began Monday on the project that will boost north-south rail transportation from six daily round-trip trains to 17 a day south of Hartford and 12 north of Hartford."

Except if you read the details you'll see that they're destroying the frequency in order to save it. In the previous schedule (PDF) there were six trains a day in each direction; three of them are being bustituted. For two and a half years.


According to Amtrak's monthly report (PDF), between October 2013 and September 2014 there were 370,896 riders on the Hartford-Springfield line, all week long. This does not include the Vermonter, so if we assume that all five other runs have the same number of passengers, and that ridership is the same every day of the week, we're talking about almost 400,000 trips being bustituted over the next two and a half years.

Why are they being bustituted? There is no explanation given in any of the press releases besides "double tracking." Amtrak's website refers to it as "Mid-Day Shuttle Service," which is a funny way of talking about trains that travel s early as 7:10 AM and as late as 6:50 PM. The Environmental Assessment has a bit more:

The project includes replacement of approximately 35 miles of second track removed by Amtrak in the early 1980s. The track, consisting of s sub-ballast foundation, wood or concrete railroad ties and steel rail, will be restored on the previously engineered Amtrak track bed. It will be aligned to support speeds of up to 110 mph. There are five sections of new double track, including one (MP 31.1 to MP 35.1) where the second track physically still remains, but is no longer in service and will be removed and replaced…

I understand that sometimes when you're double-tracking you need to disrupt the existing track, for hours at a time, like in the photo above. I also understand the desire to bustitute a whole bunch of trains for the whole length of the project, so that everyone knows what to expect and nobody gets confused and misses the bus on Tuesday the 17th because they got it mixed up with Wednesday the 18th. And yet, as with all the other Amtrak disruptions in Connecticut, it feels like Amtrak and ConnDOT really don't take Amtrak passengers seriously. I get the sense that they think of their future Commuter Rail passengers as Serious Business People, but the current Amtrak passengers are Recreational Travelers who won't mind sitting on a bus in rush hour I-91 traffic through Hartford or New Haven.

That sense makes me wonder if they're really doing all they can for the riders. How many people are working on this double-tracking project? Does it really take two and a half years? Are we closing all sixty miles of track for just one crew that will be traveling up and down the line, double-tracking as they go? Could the budget be rearranged to add more crews, so that the project could be finished in half the time?
Posted by Cap'n Transit at 1:27 AM 5 comments: