NYCHA and the fetishized green space

Today the Daily News published a hyperbolic "EXCLUSIVE: NYCHA selling off green space to developers!" As one person remarked on Twitter, this was a bait-and-switch: the headline now says "NYCHA quietly selling off parking lots, green space, playgrounds to help ease budget woes." In the diagrams accompanying the article, it looks like mostly parking lots. 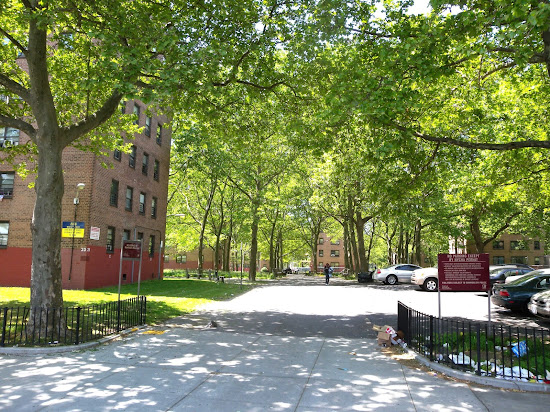 Green space in the Marlboro Houses, Gravesend.
The "selling to developers!" framing suggests that these developers would build for-profit "luxury" housing on these parking lots in between the projects, but if you read deeper, it's quite a bit less sensational. The article says that since 2013 the Housing Authority "has sold vacant or what it deems 'underutilized' land to developers to build affordable or senior housing." The News asked the NYCHA Chairwoman Shola Olatoye about future sales, and she said that they would be announced in May, "promising to sell land exclusively for affordable housing and spreading the projects across the boroughs."

News reporter Greg B. Smith was even unable to frame the article as "Community protests city initiative," because a lot of residents supported the plan: "Some tenants are angry that the limited open space they enjoy will soon be displaced by towers of apartments. Others are ecstatic, hoping much-needed senior housing will rise on what they see as wasted space."

Okay, so it's not really "NYCHA selling off green space to developers!" Instead, NYCHA may sell some parking lots and maybe an occasional ball field or "leafy triangle" to people who want to build low-income housing, and a lot of people who live in the projects can't wait for it to happen. Oh, the scandal! But there's more. 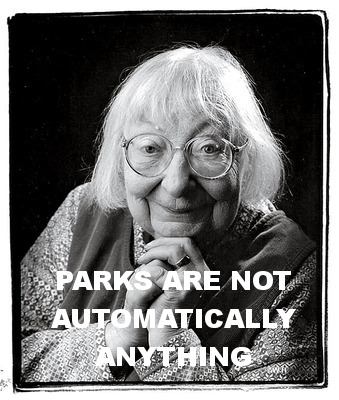 If you've ever walked around a NYCHA project (go ahead, these days you're pretty unlikely to get shot), you know that they have some of the shittiest "green space" you can imagine. If it's not fenced off, it's a big empty lawn or a grove of trees with no place to sit. If it's on the way between two places that people want to get to, it still probably doesn't get that much traffic because of its high-crime reputation.

How often do you see project residents actually hanging out in the "green space"? Usually they're on the edges of the project where they can interact with the rest of the world, the world that doesn't feel welcome in their green spaces.

One of the most hilarious things for me was seeing this posted by certain people who like to invoke Jane Jacobs, because Jacobs absolutely hated the "green space" in the projects. Over and over in The Death and Life of Great American Cities she lambasts the projects for their despotic design, and contrasts their failure to the success of human-scaled, organic streets. Here is a quote from Page 90 (with an unfortunate comparison to "savages") about the general uncritical love of what was then called "open space":

In orthodox city planning, neighborhood open spaces are venerated in an amazingly uncritical fashion, much as savages venerate magical fetishes. Ask a houser how his planned neighborhood improves on the old city and he will cite, as a self-evident virtue, More Open Space. Ask a zoner about the improvements in progressive codes and he will cite, again as a self-evident virtue, their incentives toward leaving More Open Space. Walk with a planner through a dispirited neighborhood and though it be already scabby with deserted parks and tired landscaping festooned with an old Kleenex, he will envision a future of More Open Space.

More Open Space for what? For muggings? For bleak vacuums between buildings? Or for ordinary people to use and enjoy? But people do not use city open space just because it is there and because city planners wish they would.

And here is a quote from Page 15 specifically about open space in NYCHA projects:

In New York's East Harlem there is a housing project with a conspicuous rectangular lawn which became an object of hatred to the project tenants. A social worker frequently at the project was astonished by how often the subject of the lawn came up, usually gratuitously as far as she could see, and how much the tenants despised it and urged that it be done away with. When she asked why, the usual answer was, "What good is it?" or "Who wants it? "Finally one day a tenant more articulate than the others made this pronouncement: "Nobody cared what we wanted when they built this place. They threw our houses down and pushed us here and pushed our friends somewhere else. We don't have a place around here to get a cup of coffee or a newspaper even, or borrow fifty cents. Nobody cared what we need. But the big men come and look at that grass and say, 'Isn't it wonderful! Now the poor have everything!'"

Yes, the poor have everything, including "green space." But they don't want it, the silly things. They want places where they can live when get old, so they don't have to move too far away from their families and friends. And the city may "quietly sell off" some land to developers so they can build that senior housing. Oh, the scandal!
Posted by Cap'n Transit at 11:15 PM 5 comments:

Transportation myopia of the week: 7- make that 6 ways transit can be financially sustainable

Alex Block has a summary of a discussion between David Levinson and Lisa Schweitzer on making transit sustainable from last June and July. I was quite dismayed to see three otherwise intelligent people wasting their brainpower on problems that were pretty much irrelevant. They were all three suffering from transportation myopia: the condition of seeing transit as a self-contained system rather than as an option in competition with private cars and other modes, and of seeing transit as an end in itself, rather than a means to an end. 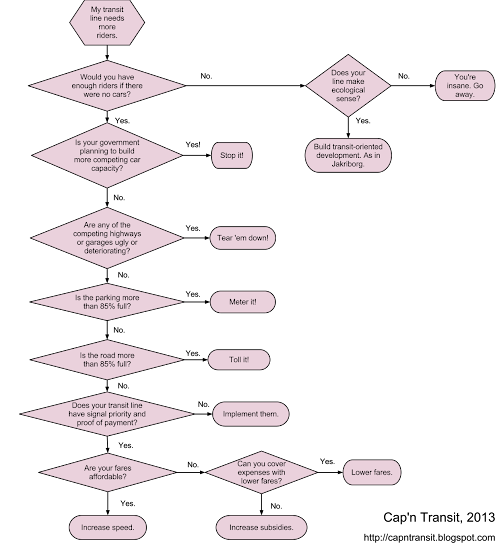 Levinson's initial piece did actually mention a couple of times that transit is competing with publicly subsidized roads and parking. In particular, he observes that, "An independent transit utility can raise fares, with the approval of a public utilities commission, so that average farebox recovery approaches and eventually exceeds 100 percent. This should be accompanied by full cost pricing for competing transportation modes — in other words, higher gas taxes or road fares."

Schweitzer devotes an entire blog post to every one of Levinson's seven "ways transit utilities could reverse the long decline the current governance model has provided" - except for Way #2, "raise fares," which I quoted above. I think this is actually an honest mistake on Schweitzer's part: she gave her commentary on Levinson's Way #1 a title beginning with "Part 2," so when she started "Part 3," she went on to Way #3. And yes, this can happen to self-described nerds, even ones with PhDs.

Unfortunately, in overlooking Way #2 Schweitzer skipped over one of the few really meaningful parts of Levinson's post. Here's the other main one:

From the mid-19th century through the mid-20th, transit was privately operated, usually running on public rights-of-way (which companies often were obligated to maintain), charging a government-regulated fare. This model was hugely profitable for decades, until it wasn't.

The causes for transit's decline are many, but rising incomes, suburbanization, and of course a much faster competitor in the automobile and highway system are among them. At that point, which ran from the 1930s to the 1960s depending on where you were in the United States, the private sector abandoned transit and the public sector took over.

Levinson himself acknowledges that transit was "hugely profitable" until competition from publicly funded roads and parking took away their ridership. And he acknowledges in his Way #2 that this could be reversed by charging the full cost for those roads and parking facilities. This is essentially the Magic Formula for Transit Ridership described by Michael Kemp back in 1973. And that's really all you need. No need for Way 1 or Ways 3 through 7.

What we need to talk about is how to get full cost pricing for roads, including potential challenges and ways to overcome them. But for some reason Levinson doesn't talk about any of that, he just goes on to talk about smart cards and land value capture and bond markets.

This is like reading an article about How to Keep Cool in Hot Situations that observes, "The causes for your house being on fire are many…" and goes on to list "seven ways burn victims could reverse the dramatic rise in heat-related discomfort." Way #2 is "put out the fire," and the rest are things like wearing an asbestos suit or putting a fan in front of a bowl of ice cubes. And then Dr. S writes a long post about the known dangers of asbestos suits, while forgetting to mention that you could just call the fire department except that the fire department is run by the arsonist's brother.

And this is the problem not just with Levinson and Schweitzer, but with other transportation experts like Jarrett Walker and Yonah Freemark when they talk about transit funding and profitability. Ultimately it's not a transportation problem at all, it's a political problem, and the transportation experts don't really have anything useful to say about it. But we insist that they say something so they come out with this kind of bullshit, which is not really wrong, it's just beside the point.
Posted by Cap'n Transit at 12:45 AM No comments: