The problem with offset bus lanes

In recent posts I’ve talked about how transit needs dedicated lanes, and how on a hundred foot avenue you don’t want to take a lane away from parking. The Department of Transportation seems to have figured this out, but there are serious problems with the approach they’ve been taking lately: offset lanes. 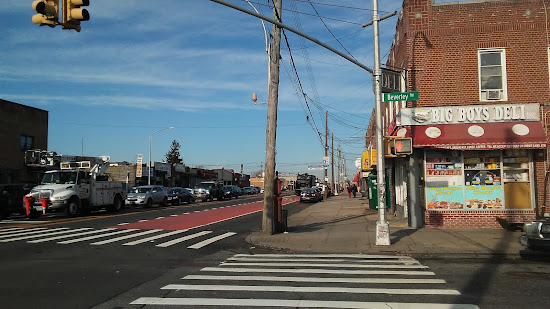 Last winter, Joby Jacob and I took the B46 Select Bus Service down Utica Avenue. I was struck by how slowly the bus moved, even in the sections that supposedly had dedicated bus lanes. It was pretty clear why: on many blocks there was a car or truck in the bus lane, sometimes more than one.

Sometimes all the curbside parking spaces were taken by parked cars, and the blocking car was double parked. It takes some spectacular chutzpah to think that your personal need to pick up an egg sandwich is pressing enough to keep a hundred people waiting. But as Donald Shoup has shown us, the underlying problem is that the City doesn’t price parking properly. If it cost more to park on these blocks people would park elsewhere, or for shorter periods of time, or even take transit. That would free up space for these short-term stops.

Sometimes there is space at the curb, but the drivers don’t pull all the way in to the space. This is occasionally understandable if the space is narrow enough that it would take a lot of time to parallel park. A lot of the time, however, there is plenty of room to pull in to the curb. The only explanation I can see for this behavior is that the driver is trying to signal to the police that they understand they’ve pulled into a no-parking zone (bus stop, fire hydrant) and will be leaving as soon as possible. It’s still a hugely selfish move, because it forces an entire bus full of people to wait for a gap in the next lane over to go around.

It doesn’t help that the DOT has debased the value of red paint by using it for part-time bus lanes, letting people get in the habit of unloading trucks and parking cars in red lanes, teaching them that the paint doesn’t really mean “don’t put your private vehicle here!” And the NYPD doesn't seem to be all that effective in keeping the lanes free.

So if we can’t put the transit lane at the curb, and we can’t offset it one lane, what should we do? Stay tuned...
Posted by Cap'n Transit at 11:18 PM 3 comments: