Here in New York when people talk about "microtransit," they usually mean Uberpool or Lyftline, and those are the services I've been focusing on. Some have mentioned a third service, Via, that works a bit differently. Via is all shared; there is no service where it's just you and the driver, like a traditional taxi. The prices are fixed: currently five dollars per trip on weekdays if you buy credit ahead of time, and up to just under ten dollars for a pay-per-ride weeknight. 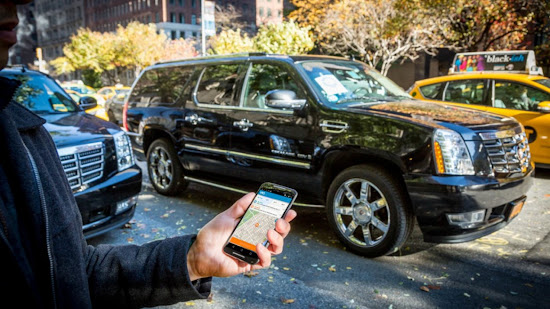 Photo: Via publicity photo
I've tried Via several times over the past year. The only real complaint I have is that they don't go to Queens: the service is restricted to Manhattan. I have hope, though, because when I started it was only available from Fourteenth to Fifty-Ninth Streets, and it's now available from the Battery to 110th Street. The next expansion will probably be Brooklyn Heights or Park Slope, but I don't think they'll ignore western Queens for long.

The first couple of times I took Via I had to wait a while, and it was just me and the driver, but the service seems to have caught on quickly. Every time since then, there has been at least one other passenger and the wait time has been minimal. If I've had to wait more than five minutes it was because my "Via-cle" (har) was stuck in traffic less than two blocks away.

Via is much more like a bus than a taxi. Twice I've gotten sedans, but the Via-cles are usually SUVs. I've had at least one trip with three other people, meaning I had to sit in the third row of one of those Suburbans or Navigators or Explorers. Since those aren't really made for people getting in and out frequently, I'm wondering how soon Via is going to start running vans big enough to stand up in.

A number of people have objected to Uber and Lyft because of the “gig economy” arrangements they have with their drivers. Of course, they’re not much worse than the taxi medallion owners in that regard. But on one recent Via trip the driver was chatting with us, and he said that Via drivers are all paid by the hour, possibly even full time. If that is correct, it sounds like a much better deal for them than just about any other taxi arrangement.

As I’ve said before, Uber and Lyft are a huge improvement over the way we did taxis up to a few years ago, but in their current incarnations they won’t do much to help the transit capacity crunch we’re feeling in cities like New York. The Via model is much more promising, and the more Uber and Lyft act on those lines, like with Uberhop, the more helpful they will be in relieving our capacity constraints.

There was another fascinating aspect of my experience with Via, and to some degree with Lyftline and Uberpool, that deserves its own post. I'll write about it soon!
Posted by Cap'n Transit at 12:14 AM No comments:

A Century of Subway Scolding

Jessica Hester had a great post detailing how we've been trying to alternately shame and cajole people into being respectful and not taking up too much space since the subways were built more than a century ago. But she didn't explicitly draw the conclusion I did: that there is no evidence these campaigns have actually decreased manspreading, blocking doors or rude language on the subway.

Don't get me wrong: there's a lot of stuff on the subway that annoys me, and I want it to stop. But it's not the same stuff that annoys other people. For example, I can't stand cell phone conversations or some asshole playing deejay on their tinny little speakers, but I have no problem with people clipping their fingernails. I would do it myself if so many people hadn't told me they hate it. And that's what I think a lot of these people are missing: the understanding that even if you can't understand why something bothers other people, it still does, and maybe you still shouldn't do it.

It may be simply that evil will always exist in the world, and the campaigns are necessary to simply keep us running in place against the forces of backpacks and panhandling. But if you've been doing something for a hundred years without making any progress, maybe you should try something else? As Hester points out, these conditions respond to forces outside the system: there is a lot less boombox-playing, smoking and tobacco-spitting today than there were in previous decades, and more mobile video games, cell phone music and Showtime.

Police Commissioner Bratton visited the subway last week, and as Ben Kabak observed, his comments were mostly clueless and out of touch. Outsider perspective can be valuable, but only if the outsider watches, listens and thinks before saying anything. I think Bratton was correct that if we are seeing more fights it's a symptom of overcrowding.

There are some transit problems that are encouraged by underuse of the transit system, like muggings, rape and graffiti. But there are others that are exacerbated by overuse and crowding, like unwanted sexual contact, door-blocking and fighting over seats. This means that the real solution is to increase transit capacity, and efforts to get people to be more polite and take up less room are mostly a waste of time.

That said, there is at least one area I can think of where a real education campaign - not a scolding campaign - could make a small difference. I'll talk about it in a future post. In the meantime, keep doing what you can to increase capacity!
Posted by Cap'n Transit at 11:42 PM 2 comments:

I wrote last year about how the current challenge for transit in cities is not building ridership but making room on transit for all the people who already want to ride, but are getting passed up or squeezed on. A lot of people have been paying attention to Uber and its competitor Lyft, and their Uberpool and Lyftline services may already be reducing car ownership. I've tried them both multiple times over the past couple of years, and they've gotten more promising. 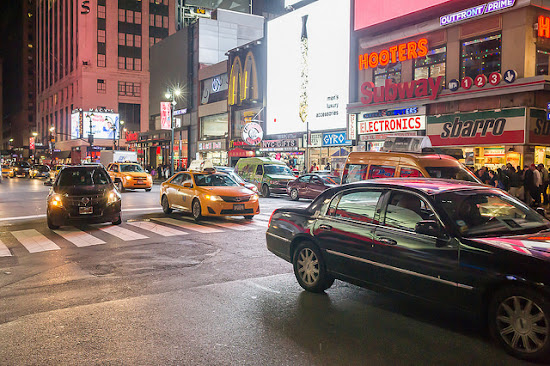 Photo: Jazz Guy / Flickr
When I first tried Uber, all they offered were big SUVs, that you had all to yourself. It was more convenient than trying to find the number for the local car service and wait on hold, but it was too expensive for me. The smaller Uber, and Lyft vehicles and the ability to share rides with the Uberpool and Lyftline brought the price down to where it was a potential splurge for when I was tired of the subway.

After decades of taking taxis rarely, if ever, I was actually underwhelmed by the taxi experience in general. People pay so much more than for a subway ride, but the ride is often a lot slower and less smooth. Basically, you're stuck in traffic in a car with at least one stranger, who controls the radio and the heat, doesn't necessarily know where they're going, and sometimes really wants to talk. How is that relaxing?

Sometimes it is definitely worth paying for a taxi, to have a guaranteed seat, a one-seat ride, or door-to-door service. For places and times where the buses and trains run at low frequencies it can be a lot quicker.

I was interested to see how well these sharing services work. For the first several months I had the vehicle to myself, even if I took advantage of Lyftline's offer of waiting ten minutes for a lower price. But recently I've had a few shared rides. One couple was on their way to LaGuardia, and taking us home must have added at least fifteen minutes to the trip. I hope they left plenty of time!

One thing that can't come soon enough is services like "Uberhop," currently in pilot in Seattle, where you can get quicker and/or cheaper service by walking to a point chosen by the software. Last year I was waiting for a Lyftline to twist through a maze of one-way Greenwich Village, and noticed that my fellow rider was being picked up a few blocks away. I texted the driver, and was able to get to the car right as the other passenger was getting in. I saved all three of us another four-block loop on congested streets.

A promising application of this technology is when there is an unexpected outage on the subway, or even a skipped bus run, and a surge of SUVs (or even vans) come and whisk the waiting passengers away. Cost is a potential factor, but I think if people could be confident that a car would come quickly and get them there with minimal delay, a lot more of them would do it.