What's the real story behind those photos of abandoned dockless bikeshare bikes? 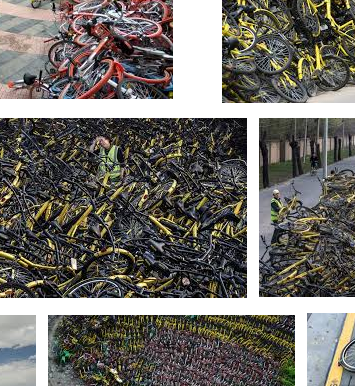 At this point you've probably seen at least one, maybe several: pictures of "abandoned" or "discarded" dockless bikeshare bikes in China. I'm talking about the ones with hundreds, if not thousands, of bikes in the same picture. They're either very tightly stacked side by side, or more frequently jumbled on top of each other in a humongous heap, in a field or an empty lot. There's usually at least two different colors of bikes, representing different bikeshare companies.

There's almost never any explanation beyond a short caption. When I read "abandoned" I had this vision of some guy riding along on a bikeshare bike. All of a sudden the bike has a flat next to a field, so he casually tosses the bike into the field and walks on. A little while later a woman comes along. She gets tired of riding and stops next to the field, and sees the previous bike lying there. She tosses her bike on top of that one and walks away. Then some ill-behaved youths come running up carrying a bike that they found on a sidewalk, and throw it on top of that. It becomes the thing to do in this obscure Chinese city (Fuzhou? Chongqing? Qingdao?). For some reason, the bike companies have no interest in recuperating these hundreds of bikes, which have cost them tens of thousands of dollars. The bikes sit in the field and rust.

These photos are designed to scare, and they have been effective. Since they've appeared I have read several tweets, blog posts and articles where various people express their fear of "what happened in China." Ofo comes to town and next thing you know the hayfield behind the old Lowe's is full of bikes and there's nowhere to go smoke a joint. Those arrogant tech companies. We can't let that happen here!

You know what I haven't read? An explanation of how the bikes actually got in the field. Because the story I told is completely implausible. Yeah, I've heard about how wacky! and exotic! those Chinese people are. Then I got to know some, and it turns out they're just people. Sure, they'll do things in large numbers for money (like moving to cities) or social interaction (like the annual Lunar New Year travels) - just like Americans. They don't just do random stuff like throw bikes by the hundreds in some field.

What is the real story of what happened to those bikes in China? I'd be interested to know, but for now here's my guess: those bikes were thrown in that field - or stacked in that lot - by some organized group of people, led by a particular person or a small group. And the most likely organized group is the government. I strongly suspect that in every one of those pictures, the bikes were put there by government employees, on orders from some petty bureaucrat. Why? Maaaybe because they were broken. Maybe because the company had no permit to operate in that area. Maybe because that bureaucrat hates bikes. Maybe that bureaucrat is just an asshole.

When I think about it that way, it's no longer a story about arrogant tech companies or unsustainable bike share. It's not even about Those Wacky Chinese. It's about arrogant bureaucrats, supported by reactionary old people who drive, intent on maintaining control and preserving the hierarchy that puts them on top. And they're all boosted and broadcast by reactionary media people who love to get a rise out of us with scary photos.

That's a story as old as time, and it should scare us all that it's happening with bikeshare.
Posted by Cap'n Transit at 11:14 PM 6 comments: