How we get safer crosstown streets 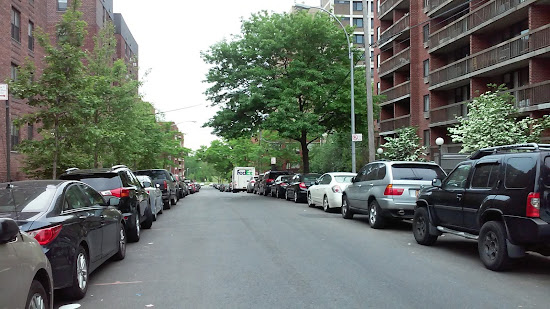 The killing of Citibike rider Dan Hanegby by a Short Line bus driver on West Twenty-Sixth Street this week highlighted a number of critical problems with the way buses are managed in Manhattan, and pointed up serious conflicts and contradictions in the agendas of transit, pedestrian and cycling advocates in the New York area and beyond.

It’s true that buses are dangerous to cyclists, and to pedestrians as well. The person who has always articulated this most clearly and forcefully has been Peter Smith. In a guest piece for Cyclelicious he focuses on “Bus Rapid Transit”; in a comment on a Greater Greater Washington post he talks about buses and bikes in general, and in a comment on a Bike Portland post he specifically discusses cases where bus drivers hit cyclists.

On a basic level, Smith is right: if we are really committed to Vision Zero, "the end goal is to do away with all vehicles that cannot live harmoniously with human beings — buses and cars should be the first to go." And although he claims that buses are more scary than cars, he also says that "the single occupancy vehicle in the city is the greatest manifestation of that evil—so it shouldn’t be tolerated."

If buses (and cars and trucks) cannot coexist with cyclists and pedestrians, what do we do about it? Smith’s vision is primarily centered around bikes and pedestrians, but sometimes people want to go further than they can bike. Sometimes we want to carry things - maybe very big things. And sometimes we can’t walk or bike at all. The answer, of course, is trains, as I’ve written before, and as @DoorZone wrote on Twitter in response to this tragedy:

That’s a lovely vision of the future, but how do we get to it? Even the wise cannot see all ends, but it seems like gradually investing more and more in rail (including at-grade trolleys), pedestrian and cycling infrastructure, and ending subsidies and requirements for roads and parking will lead to an incremental shift away from cars, buses and trucks and towards trains, bikes and walking. I think we can also do more with wheelbarrows, hand carts, cargo bikes and other non-motorized freight carriers than we currently do.

Unfortunately, our city’s advocates for walking and cycling aren’t conducting anything like a coherent campaign to shift our long-distance and heavy-goods movement from cars, buses and trucks to trains and trolleys. In fact, many of them are actively hostile to subways and trolleys, treating them as luxuries for the rich. In contrast, they elevate walking, cycling - and buses. In particular, they are fond of "Bus Rapid Transit," which they see as cheap, quick and democratic, and sometimes explicitly tout as a "surface subway."

These proposals are often presented as ways to get working-class New Yorkers to from homes outside of Manhattan to jobs outside of Manhattan, but there are still lots of jobs in Manhattan, and it’s a convenient transfer point to get to other parts of the metro area. In particular, there are lots of working-class people who live in parts of New Jersey and Rockland County where the bus is the most convenient way to get to work - and in fact, the Lincoln Tunnel Exclusive Bus Lane is the most rapid bus facility in the metro area.

But because of the way buses are mismanaged in New York City, there are almost no through-running bus lines. People from New Jersey have to get off the bus at or near the Port Authority Bus Terminal and make their way to jobs or shopping, usually by transferring to a subway.

The "Bus Rapid Transit" boosters are right about one aspect of buses: they can be scaled up quickly in response to increased demand. This worked very well when demand for transit rose beginning in 2007, in response to rising gas prices and crashing home equity. People began taking the bus in greater numbers, not just to get from the New Jersey suburbs in to Manhattan, but from cities like Philadelphia and Washington, and even further afield through the Chinatown bus network and relative newcomers like Megabus, Bolt and Vamoose.

The problem was that the "BRT" facility - the Exclusive Bus Lane and the Port Authority Bus Terminal that it feeds into - were already over capacity. So our "BRT" activists immediately demanded that it be expanded, right? No, they were actually pretty quiet about it, which left the bus operators to establish pick-up spots on the street, at handy transfer points in Manhattan, particularly Chinatown and Midtown.

When NIMBY "community members" came out to complain about the buses, were our “BRT” activists there to oppose them? No, they were pretty much AWOL, as they had been when NIMBYs torpedoed the 34th Street Busway. They did nothing as the State Senate forced bus operators to run a gauntlet of NIMBYs before they could legally pick up passengers on the street, and they haven’t had the power to increase off-street infrastructure.

Despite Peter Smith’s allegations I have not seen any proof that buses are any more dangerous than cars. In fact, we would expect them to be less dangerous, since they are operated by trained professionals with their careers potentially on the line. And yet self-proclaimed pedestrian advocates like Christine Berthet continue to repeat these allegations and to lobby for ever-greater restrictions on buses, and others in the livable streets movement echo them.

So what should we do to make our streets safer for cyclists? Some have called for physically separated crosstown bike lanes at key intervals. I like this idea. But what if you’re riding to a destination - or to a Citibike station - that isn’t on one of those streets? Can we create physically separated lanes on every street in the city? I don’t think that’s feasible or necessary. 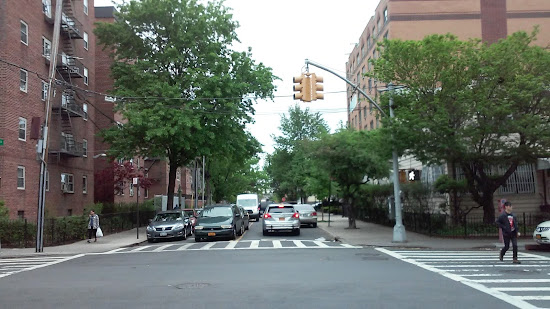 As I’ve been arguing for years, we need to reconfigure our "side" streets as yield streets. They are all at least sixty feet wide. If you’ve ever been on one when it’s closed for construction or events, you know that they have plenty of room for two-way car traffic, and a hundred years ago they were all two-way. They can even accommodate a lane of parked cars on each side, plus a lane of moving cars in each direction, as long as the vehicles are all relatively narrow. When people started double parking it caused congestion, so the city changed them to one-way traffic flow - which has in turn led to a large increase in traffic as drivers circle the blocks. But when there is no double-parking the driving lane is extra wide, which leads to drivers speeding and crowding out cyclists.

The solution, as recommended by Andres Duany and Elizabeth Plater-Zyberk and the NACTO Street Design Guide, is to reserve space for loading zones throughout the length of each block, return all the streets to two-way flow, and ramp up enforcement of double parking. Then it is important to monitor the situation and increase the space for loading zones as necessary. Additional traffic calming measures like chicanes and pavement treatments may be necessary. If the design is implemented properly, drivers will be deterred from speeding by the prospect of a head-on collision, and will be less likely to pressure cyclists into the door zones.

You might have wondered why, instead of 26th Street in Manhattan where Dan Hornegby was killed, I used a picture of the 137-00 block of 45th Avenue in Flushing to illustrate an over-wide one-way cross street. As you can see from the second photo, the rest of the blocks on 45th Avenue are two-way, and people drive much more slowly and carefully. (Holly Avenue, one block south, is the same width, two-way, and a bus route.) Again, these yield streets are not a substitute for protected bike lanes, but a treatment for streets that are not chosen as high-priority cycling corridors. In other words, it should be the default configuration for all streets that are less than eighty feet wide.

In the long term, yes, we do need to get buses off our streets, but the urgency to get private cars off the streets is just as great. In the short term, we could do a lot more to accommodate buses in Manhattan, like facilitating through-running and stops on major crosstown streets. To make crosstown streets safer for cyclists, we should implement protected bike lanes leading to Citibike stations near all Midtown subway stations. The rest of the crosstown streets should be reconfigured as two-way yield streets.
Posted by Cap'n Transit at 10:44 PM No comments: 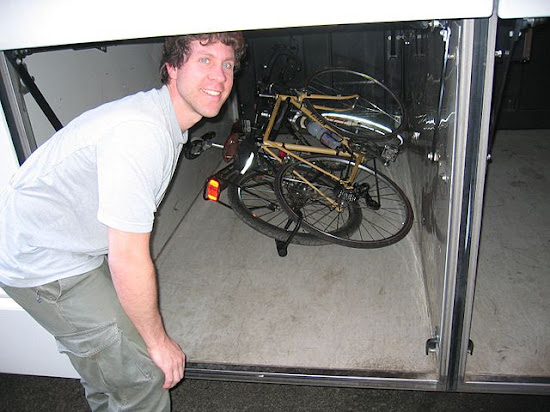 Someone got a bike on a Chinatown bus. Photo: Craig Lebowitz / Wikimedia.
A couple of years ago I was in Penn Station and heard an announcement about bustitution due to track work. The announcer informed us that the buses would not be able to accept bikes. Just the day before I had been talking with some people about cycling in Montreal. I haven't had a chance to experience it, because I haven't been there since before they rolled out the Bixi bike share. Years ago I had planned to bring my bike there on a visit, but there was bustitution and Amtrak informed me I wouldn't be allowed to take the bike on the substitute buses.

In many small cities, government-run local buses are equipped with a front rack that can hold two or three bicycles. But the policy of long distance, usually private, coach operators (at least in North America) is typically that they will only allow bikes to be stored in the cargo bins if they are in boxes, with the handlebars removed. Of course, it is very difficult for a bicycle rider to carry a box large enough to hold the bike, and removing and reattaching handlebars requires time, skill and specialized tools.

Why do they do this? It smells to me of that toxic combination of elitism and liability worries that makes it painful to interact with American corporations. The owners and executives of the coach companies don't take their own buses, and they don't ride bikes. They don't want to take bikes on the coaches: they take up a lot of space, it's time-consuming for the drivers, and they're afraid of being sued if the bikes get broken. Their lawyers said something about liability, so they made a rule: no bikes.

If we could get long distance coaches to accept bicycles in a convenient way, this could easily be used to extend the coach network, with a measurable benefit to the lives of people who don't own cars. When I was a teenager, I was essentially cut off from all the jobs at the local mall because it was five miles from the nearest coach station. The roads from the bus station to the mall were relatively friendly to bike riders, but the roads from my town to the bus station were not. This would also encourage people to take a coach for tourism.

I’ve seen a few blog posts by bike advocates in favor of racks on city buses, or space for bikes on trains. But I don’t recall ever seeing one in favor of convenient bike storage on long-distance coaches. Do you know any coach operators that carry bikes conveniently? Was there anything that overcame their objections and persuaded them to do this?