Do we need the Port Authority Bus Terminal?

In 2015 I talked about the proposal to build a new bus terminal in downtown Flushing, and came up with the following list of six features. The current Port Authority terminal on 41st Street provides some of these some of the time: 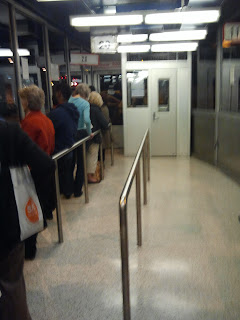 Any transit system is easier and more attractive with one-stop shopping, short-term bus layovers and easy transfers. But long-term bus layovers, avoiding congestion and passenger facilities are more important for long distance trips than short ones.

If I’m taking the bus to Binghamton, I might have to wait an hour or more, so it’s really important for me to have shelter, bathrooms, tickets and food. (It would be nice to have seating and a place to store my bag, but that’s a whole other post.)

All movement is quicker if you don’t have a lot of people or vehicles in your way. But for someone who’s getting off right on the other end of the Lincoln Tunnel, going up three flights of stairs cuts out most of that time savings. Trips with more than a mile between stops benefit more from grade separation, because they have the time for a bus to get up to speed.

As I pointed out in my post on the proposed Flushing bus terminal, there are actually advantages to having buses pick up and drop off on the street. It allows for through-running, so that passengers whose destination is beyond the terminus can just stay on the bus, which then heads out to a layover point in a less congested area. Street pickups can also make transfers more efficient and robust by spreading them out across multiple stops.

Street-level transfers are better for the local economy. Bathrooms and shelter are public goods that need to be provided by the government, but food and shopping? That’s what downtown streets are for, in a very real sense. In Flushing the streets do an excellent job of providing snacks, drinks and banking for bus and train passengers. A government-owned building filled with corporate concessions is necessarily less dynamic and less friendly to small businesses.

The Port Authority Bus Terminal in Midtown provides all these services for long-distance bus lines like Greyhound, Peter Pan and Adirondack Trailways, but it claims to have no room for other long-distance carriers like Megabus, Fung Wah, Vamoose and Hampton Jitney. Some of these companies claim they save passengers money by not paying gate fees to the Port Authority, which is another way of saying that the City doesn’t charge enough for what is essentially a rental of valuable commercial real estate.

Other bus companies say that they offer more convenient pickups in Chinatown and the Upper East Side. But that just begs the question: if bus terminals are so great, why we don’t have them for every direction that buses go? Someone decided it was better to have apartment buildings at the mouth of the Midtown Tunnel, and office buildings near the Holland Tunnel. Were they wrong?

The other claim, that there is no room in the Port Authority terminal for Bolt and LimoLiner, is also questionable. Why do Red and Tan, Academy and Suburban load all their buses in the terminal, when most of them leave frequently for short runs? Why is New Jersey Transit, a government-owned provider of short-haul services, the biggest carrier in the terminal?

Imagine if New Jersey Transit shifted just half of their bus pickups to the street. First of all, I’ve been told that there are more jobs in East Midtown than near the Port Authority. Some of the buses could pick people up and drop them off closer to their jobs. Second, the buses could provide transfers to other trains beside the Seventh and Eighth Avenue, Broadway and 41st Street lines. That would all take a load off the E, 7 and Shuttle trains.

Moving some local NJ Transit buses to the street would free up space in the terminal. I’ve heard that the tight schedules are a source of delays, so just having more wiggle room would improve reliability on the remaining routes. This would still leave room to bring in some long distance services off the street. If it turns out we still need room for long distance services, we can move more NJ Transit buses to the street, as well as some of the shorter, more frequent runs by private carriers.

Some people might complain that the buses would just get stuck in Midtown traffic. This is why it is essential to give them, and the jitney vans, full access to the dedicated bus lanes on 34th, 42nd and 57th Streets, and to make those lanes real busways instead of the half-assed arrangement we’ve had since the DOT botched the process on 34th Street. It would also help to make them true through-running routes, going through the Midtown Tunnel or over the Queensboro Bridge.

You may have heard that the Port Authority board has declared its bus terminal to be at the end of its life, and said that it wants to use eminent domain to acquire a new property somewhere west of the current terminal, build a new terminal there at a cost of billions of dollars, and sell the current terminal to developers. The main thing wrong with this is that it would be horrible for subway transfers.

It’s bad enough to have a terminal where only the east end touches Eighth Avenue, meaning that some passengers have to walk more than two avenue blocks to get to their trains. The Port Authority Board wants to add at least another full avenue block. From what I’ve heard, most of these people have chauffeurs and all of them have free parking, and they’re baby boomers who equate driving with success, so none of them ever make this transfer.

Stephen Smith has argued that any amount in the billions should be spent building enough train tunnels under the Hudson to accommodate all the bus passengers, so that bus transfers can be made in New Jersey, and the terminal can be torn down and not replaced.

I agree with Stephen’s vision as the ultimate goal, but in the medium term there will be short trips that are best made by bus through the Lincoln Tunnel, and those trips should have access to our streets for pickup and dropoff. There will also be long distance bus trips that will be more convenient if they connect to the subway than to a commuter train, and we should have a terminal for them in Manhattan.

The good news is that a terminal serving a few long-distance routes can be much smaller than the current one. It could fit on the site of the South Wing of the current terminal, and probably doesn’t need as many levels - or the parking garage. If that wing really needs to be rebuilt, some of the buses could be relocated temporarily to the lower level of the North Wing - or the Farley Post Office.

The bottom line is that we don’t need a huge bus terminal if we have trains. If we want to spend billions improving our transit system, rail is a much more efficient, sustainable and wise place to spend it.
Posted by Cap'n Transit at 12:45 AM 2 comments: