Josh Barro is not alone in being stuck in the mindset that transit always needs more riders. It seems to be a hard thing to grasp, but sometimes you have enough riders to fill your buses and you have to create more capacity so that you can take more people out of their cars. These people must have a hard time going on weekend trips with tiny purses and briefcases, or buying large sodas when they're really thirsty. 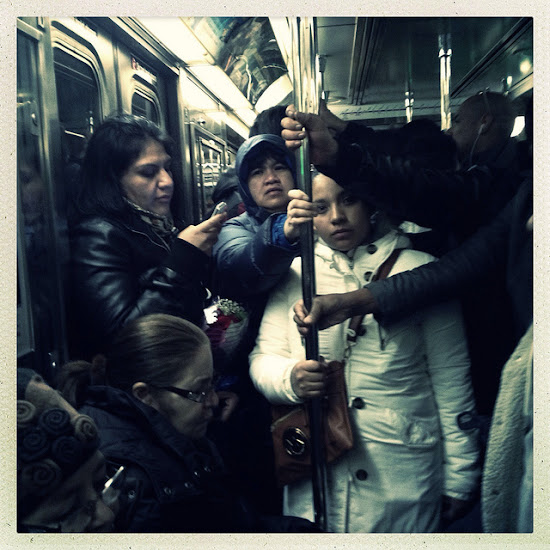 Photo: Bonnie Natko / Flickr
You might think that Barro would be familiar with crowded transit since he lives in Sunnyside, where the 7 train has been crowded and unreliable for the past few years. At least some of our neighbors have figured out that we need more capacity, and organizing a Facebook campaign that has attracted over 800 members in just a few weeks. Some of their anecdotes and photos, on top of my own experience, have convinced me that the NYMTC's capacity estimates are inaccurate, out of date, or otherwise unrepresentative.

So what can we do to increase capacity on the 7 train? Some people say that once the MTA finishes installing the new Communications-Based Train Control signaling in 2017, we will have more trains. At the very least, CBTC will help things run more smoothly. But there are reasons to be skeptical.

Well, the MTA actually tested that almost exactly thirteen years ago: they spent the morning of Saturday, April 13, 2002 trying to run thirty trains an hour on the 7 line. I remember when they did it, but didn't hear much about the results. If you're wondering why, here's a report by an independent observer named Stephen Bauman (still posting today) who watched the test from the 111th Street station and compared it with his observations of the normal rush hour on the previous day.

Bauman calculated that the MTA was able to increase the number of trains per hour from 25 to 28. Since they were running ten cars per train instead of the normal eleven, that represented a decrease in capacity. With more train cars and newer ones, they might be able to run 28 eleven-car trains today.

A bigger concern that Bauman conveyed was that the MTA was simply not up to the task, organizationally. As he observed, the dispatcher's clock in Main Street didn't even show seconds, the published timetable is vague and the internal timetable may not be any better, the trains were likely not timed right leaving 111th Street, the conductors did not wait for a signal before closing the doors, and "they ran out of trains around 8:30."

There was one train that sat in the station for six minutes. Bauman writes, "I would definitely catagorize the delay of nearly 6 minutes in getting operating personnel to operate a departing train to be part of the TA's lack of operational ability. There were about 5 supervisors on the Flushing bound platform. There weren't any on the platform where the trains were supposed to leave for Manhattan."

Some of these shortcomings are self-correcting: if the MTA tried this on a weekday the passengers would prevent the trains from leaving early. Others may just be kinks that could be ironed out over time. But overall the outcome is discouraging. We should expect and demand more, but we may not be able to get more any time soon. That means we'll have to look into other improvements, like bus lanes on the bridge and the tunnel, and increased frequency on the Long Island Rail Road.
Posted by Cap'n Transit at 12:40 AM 5 comments:

They can't go back to Ohio

One of the nastiest aspects of NIMBYism in New York City is the scapegoating of people who moved here from somewhere else. For years I've heard complaints about "people from Ohio" or "from the suburbs," and a veneration of "native New Yorkers." I can sometimes escape these complaints because I was born here, but if they say "lifelong New Yorkers" I don't qualify because my family yanked me out of here when I was a toddler, and apparently it doesn't matter if I came back as soon as I could. My father, who moved here when he was in his twenties and never owned a car, would not have qualified either.

Even Jeremiah Moss, who rages against the "suburbanization" of the city, acknowledged that he comes from the suburbs, and got a "dose of my own vitriol" in 2008 when Danny Hoch raged "Go home!" at non-natives. Moss gives a list of non-lifelong New Yorkers who have made the city great (to which I would also add Billy Joel, Donald Fagen and Jane Jacobs), and ends with a great quote by E.B. White about "three New Yorks," with the greatest being that of the non-natives: "the settlers give it passion." 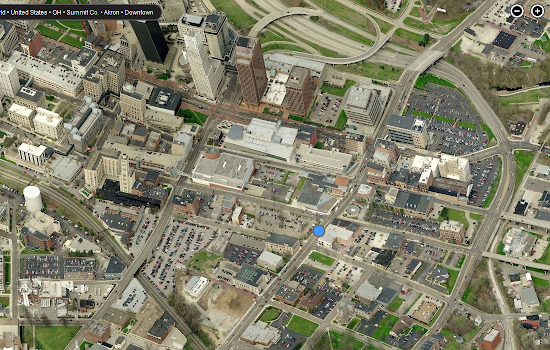 Parking crater, Akron, Ohio. Photo: Bing Maps.
In typical No True Scotsman fashion, Moss's commenters leap to draw a distinction between White's "person who was born somewhere else and came to New York in quest of something," and the "moneyed masses" that they were yearning to hate. Some people call them "hipsters," Moss previously called them "yunnies" for "young urban narcissists."

I think the difference is mostly exaggerated. Moss asks, "while there were probably always normal tensions between natives and newcomers, today it feels like a war, soaked in hate. as a long-timer, i look at newcomers with, at the very least, suspicion. so what happened between e.b. white's days and today?" I'll tell you what happened, Moss: now you're on the "long-timer" side of the war. The hate runs mostly from the long-timers to the newcomers, and at worst the newcomers regard the long-timers with contempt. Andy Warhol and Allen Ginsberg weren't narcissists? Gimme a fucking break.

And yet there is a kernel of truth there. While my dad, and Patti Smith, and Lou Reed, came to New York because it was the center of the world and they wanted to be there, a lot of people who are here now would be happy in other places. But they are here in New York because there are no other places for them.

A lot of the people I know would be just as happy in Saint Louis or Schenectady or Syosset or Saugerties. They wouldn't mind living in another big city, or a medium-size city, or a suburb, or a small town. But despite the breathless articles about suburbanites driving in Manhattan, most of them want to live someplace where they don't have to drive everywhere, or at all.

Here's what life is like for most people outside of the city, especially parents: drive the kid to school, drive to work. Drive to pick the kid up and bring them to soccer. Drive to shopping. Drive to the doctor's office. Drive to dinner. Drive to visit friends. Drive home. Drive drive drive. This is life for both parents, and for the kids (if they don't kill themselves driving drunk), and for the grandparents (if they don't kill themselves driving while disabled).

All this driving is killing us, and it's killing the planet. We want people to stop driving. We want them to live in walkable neighborhoods. But my wife and I tried living in walkable neighborhoods in two other cities, and we still felt the constant pressure to drive. Even if we could walk to work and to some restaurants, the stores and offices and friends were still far away and not well served by transit. So we moved back to the city, along with thousands of others.

This is the thing that pisses me off the most about the vicious scapegoating from Moss and his friends: these people are doing what we want them to do! They walk to shopping, and to visit friends. They walk the kids to school. They take the train to work. They take the bus to the doctor's office. So what do we do? In San Francisco people throw rocks at their buses. In New York we call them dirty hipsters and tell them to go back to Ohio.

They can't go back to Ohio. As Chrissie Hynde pointed out, their cities are gone. Even if they manage to find a reasonably safe place where they can walk to work and their kids can walk to school, there are hardly any jobs, and those jobs are an hour's drive out in the suburbs.

If we really want to keep the people who come to New York because it's New York and get the rest to go away, bringing rents down, we need to give them what they want elsewhere. That means bringing jobs back to the downtowns of Saint Louis, Schenectady, Syosset and Saugerties. It means tearing down their bypasses, reconfiguring their one-way pairs, reforming their zoning and undoing all the other changes that have turned their centers into parking craters. It means reconnecting them to the rest of the country with trains and buses that go downtown.

It means solving the underlying problem instead of wasting a bunch of people's time in a counterproductive attempt to stop the symptom. It means looking at these "hipsters" and "yunnies" as people making more or less rational decisions, instead of as faceless monsters. Are you up to the challenge, Jeremiah Moss?
Posted by Cap'n Transit at 2:08 AM 13 comments: