On my post about Staten Island, chrismealy commented that we could trade it for Bergen Neck, the peninsula in New Jersey just north of it. This is actually something I've been thinking about for years.

I've called Hudson County "the fifth borough" because Staten Island is so unlike the other boroughs. There's no real good reason why the Arthur Kill is the boundary between New York and New Jersey, rather than the Narrows. It's just a historical accident. 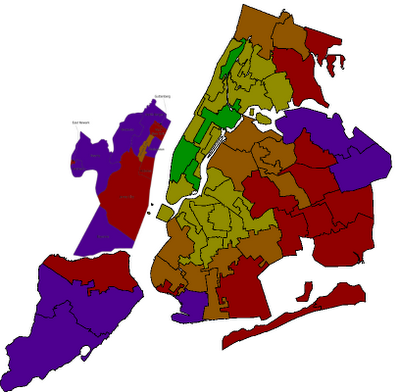 Jersey City, Hoboken and Weehawken share more history with Manhattan than Staten Island, and better transportation links. Development patterns in Hoboken resemble those in Greenwich Village, and those in North Bergen resemble Astoria. From the map above, it looks like car ownership is higher in Hudson County, but that may be misleading. I can't get census data below the municipality level, and there's probably a big difference between car ownership in Journal Square versus Greenville.

Or we could even just let Staten Island secede without any new territory. You could argue that we should preserve the differences in transportation regulations between New Jersey and New York that have shown us that private transit can work in the US if you regulate it right. That's the kind of argument that Chuck Marohn has been making on StrongTowns, and it makes sense to me. We shouldn't say no to annexing Hudson County, but I don't think we need it.

New York without Staten Island means two or three less car-obsessed City Council members. It means one less car-loving state senator, and four less assemblymembers, and that may be the biggest reason that the legislature voted against it when Staten Island voted to secede in 1993.

Letting Staten Island secede would probably mean transferring the Verrazano Bridge to the Port Authority. That would mean less toll revenue for the subways, but also a lot less of our city and state transportation money going to Staten Island's roads and bridges.

Really, though, it's not worth the effort to kick Staten Island out of the city. If they want to go, we should let them. But if they want to be part of the city, I'm okay with that. I just wish they'd start acting - and voting - like it.
Posted by Cap'n Transit at 12:09 AM 11 comments: 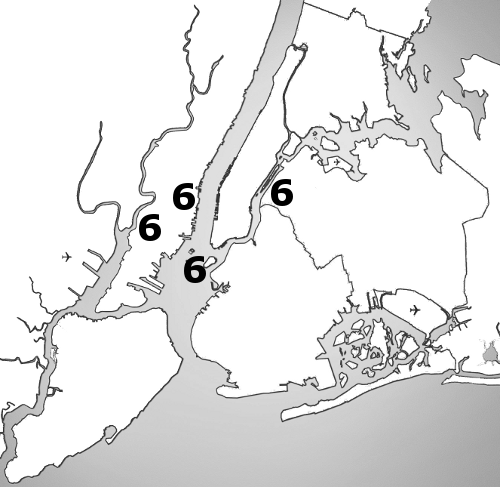 Map: mapsof.net
Some things that have been called the sixth borough of New York City: 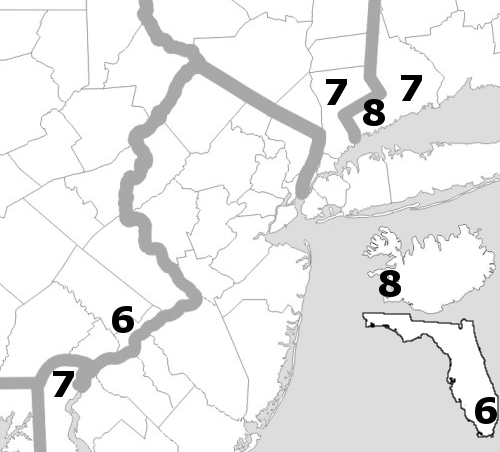 Maps: Amaps.com, My Florida History, About.com.
Some things that have been called the seventh borough of New York City:

Some things that have been called the eighth borough of New York City: