Do you want to see real inequality? Do you want to see well-fed people, satisfied smiles on their faces, walking past lines of hungry people waiting in the cold, or in the hot sun? It's not hard to find, here in one of the richest cities in the world: just go to any restaurant that has a line for brunch. 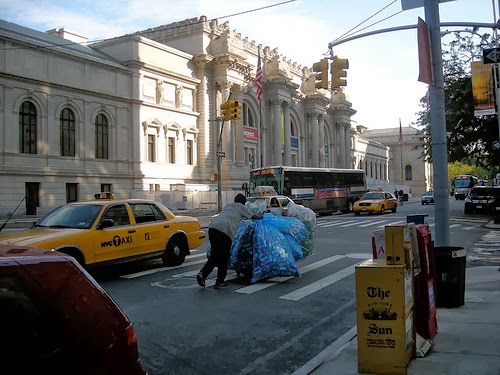 Photo: Jessie Daniels / Flickr.
Yes, I'm being flippant. But I'm making a real point: just because you observe inequality in a place does not mean that that place creates inequality. In fact, imagine if you had a magical machine that turned poor people into rich ones, or even if you just had someone who sat at a desk and handed out stacks of twenties. You'd see poor people next to rich people, because the poor people have to go to that place to become rich people. In fact, if you go to some of the places where smug people tell you you won't see rich people stepping over poor people, chances are very good that they're that way because of segregation, like Detroit.

I've been to places with relatively mild weather - Seattle, Vancouver and Albuquerque, in particular, but I'm sure there are more - and people there told me that their city attracts homeless people because the living is easy. You can see the challenge: suppose that your city has a million poor people, and you come up with a brilliant economic development plan that lifts them all out of poverty in a year. What would happen next? A million more people would move in, ready for their chance to escape poverty. Perfectly reasonable on their part.

What's not reasonable is to blame "the city" - its government, and usually its people - for the inequality, as I often see being done to New York. If you see inequality in a city, it could be that the city is making its residents poorer, or it could be keeping its poor residents down over generations. It could be that everyone's getting richer equally, but the rich had a head start. Or the city could be making its poor residents richer, and they then move out or have a low birth rate, and are replaced by poor immigrants.

There are even ways to tell. Look at adults (living anywhere) who were born to poor city residents. Are they richer or poorer than their parents? How does their change in wealth compare to the children of their parents' wealthier neighbors?

I honestly don't know. I haven't looked at that data. But I'm not the one demonizing New York for "inequality."
Posted by Cap'n Transit at 11:18 PM 2 comments:

Any way you slice it

Now that the election is over and there's no chance of Joe Lhota being elected this year, I can talk about how much I hated Bill de Blasio's "tale of two cities" rhetoric. Don't get me wrong: I know that there is inequality in New York, and I think we should do something about it. Framing it as "two cities" is wrong and counterproductive. I hope it's over, and I hope it doesn't come back in 2017. 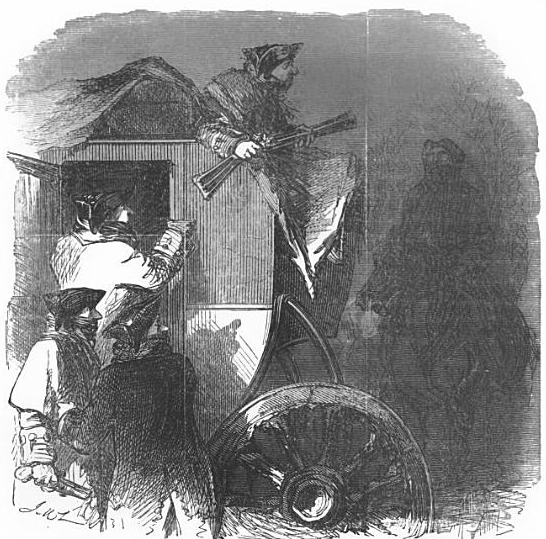 Transit security, 1775. Illustration by John McLenan, 1859.
As Matt Yglesias pointed out, “A Tale of Two Cities” is about two different cities — London and Paris. But de Blasio is not the first to use it to refer to the difference between the rich and the poor in a single city. The problem with "two cities" - the same problem that I had with "two New Yorks" when used by Freddy Ferrer and Bill Thompson - is that it's too vague. If you say there are two New Yorks, different people will draw the line between the two in different places.

In particular, some unscrupulous people will draw the line in sneaky places. From my point of view, the most important division in the city is between people who see themselves as drivers and people who see themselves as transit riders. But for the man who really revived the "two New Yorks" meme, Frank Macchiarola, the non-elite New York was that of the outer boroughs:

In 2008, Lew Fidler used Macchiarola's division to paint congestion pricing as a tool of the elite. Azi Paybarah thought Fidler got it from Ferrer, but it comes from the Manhattan Institute, where it forms part of the conservative strategy to drive a wedge between the working class and the left.

The beauty of this vagueness is that almost any way you slice them, the Two New Yorks are led by drivers, or maybe even the chauffeur-driven. Outer-borough vs. Manhattan? Drivers. Black vs. White? Think about how Al Sharpton and Floyd Flake get around. You'd think that rich vs. poor would wind up with the poor riding transit, as would white collar vs. blue collar, but the leaders of the poor and the blue collar workers always seem to be showing off their poverty by driving an old Buick or Hyundai.

Even in the city, we've got it in our heads that being a Leader - running an organization - requires a car. So whether the Leaders are running city agencies, neighborhood organizations, unions or religious institutions, they think they won't be taken seriously if they don't show up in a car. If they can't afford a car, their funders are willing to pay for one. Even for organizations based in Manhattan whose business doesn't require carrying around anything that won't fit in a wheelie briefcase.

Over and over again I've seen this pattern: Leaders who drive - no matter how radical their thinking, no matter how deep their ties to the working class and the oppressed - don't get transit. Over and over again, their idea of lifting up the Working Man is to give him cheap gas and a discount mortgage on a house with a garage. And we saw this same shit just two weeks ago with de Blasio and the pedestrian plazas:

I have profoundly mixed feelings on this issue. I’m a motorist myself, and I was often frustrated. And then I’ve also seen on the other hand that it does seem to have a positive impact on the tourist industry. So for me, the jury’s out on that particular question. I think it’s worth assessing what the impact has been on traffic, what the impact has been on surrounding businesses. I would keep an open mind.

We do need to talk about inequality in New York and the best way to fight it. As Ben Fried wrote today, transportation is a powerful tool to combat inequality. (But I don't think transit can create a classless society all by itself.) But the "Tale of Two Cities" thinking just short-circuits that.

De Blasio's victory speech last night was very conciliatory. I hope it's the last time he uses the "Tale of Two Cities" for a while, but I'm sure he'll be tempted to dust it off again soon. And when that happens, I hope someone he trusts will look at him and say, "Enough with that bullshit, Bill. Give me a way of thinking about inequality that doesn't end with both sides sitting down to talk - at a nice seafood place on Cross Bay Boulevard with plenty of parking."
Posted by Cap'n Transit at 11:40 PM 6 comments:

Why I care about Suffolk County

Last year I explained why I care about transportation in the suburbs, even though I live in the city (well, Queens). But some suburbs matter more than others. Here's an illustration: last month I talked about how Staten Island affects our goals. It does, mainly because its strategic political position gives its citizens outsize power over transportation policy, and because they like to drive all over the city. But in terms of other factors, it's a relatively small player. Look at how many vehicle miles were traveled (VMT) in the borough in 2005: 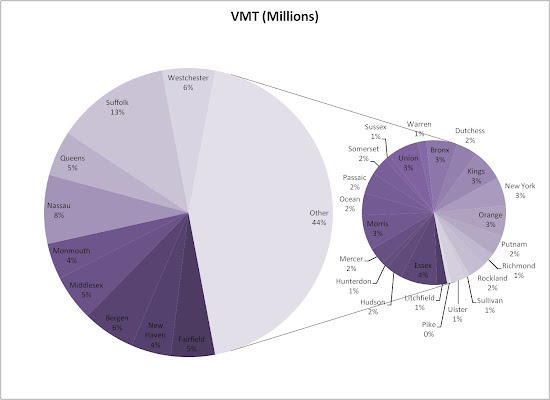 According to the EPA, vehicles were driven 2 billion miles in Richmond County in 2005, or 4,215 VMT per capita. That is just 1.29% of the 155 billion total VMT in the region that year. According to the National Highway Traffic Safety Administration, 56 people were killed on Staten Island's roads in 2005, which was 1.56% of the 3,601 total people killed in car crashes that year. 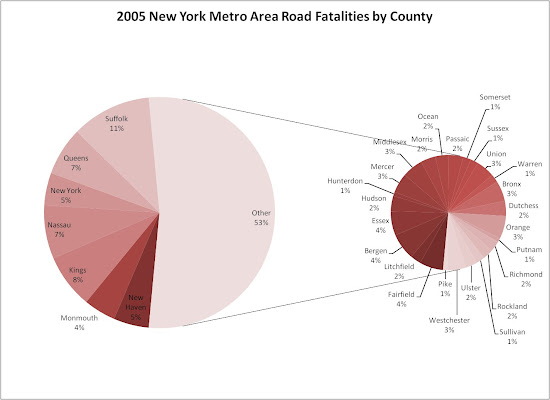 If every Staten Islander sold their cars tomorrow, it wouldn't make that big a difference in pollution or death. But if you look at those charts, there are other counties that jump out at you. Queens, Nassau, Monmouth and New Haven counties are all on the bigger, left-hand pie in both charts, meaning they contribute over 4% of VMT and fatalities. And the biggest culprit is Suffolk County.

In 2005 there were 19.8 billion vehicle-miles traveled in Suffolk County, which roughly covers the eastern half of Long Island, 12.8% of the regional total. 402 people were killed on Suffolk's roads, 11.2% of the total. That gave it the largest share of both measures by a wide margin. Any changes we make in Suffolk can have a big impact on the region's health.

On a per-capita basis, there were 13,171 miles driven for every man, woman and child in Suffolk county, and 27 people were killed out of every hundred thousand. The county with the lowest VMT per capita was Brooklyn (1,951) and the lowest fatalities per capita, believe it or not, was the Bronx (11 per hundred thousand).

If the average person in Suffolk county only drove 1,951 miles a year, it would bring the county's annual VMT down to 2.94 billion, an 85% reduction. If we could bring Suffolk's per-capita road deaths down to the level of the Bronx we would save 282 lives.

But that's really ambitious. What if we just brought the road deaths down to the regional median level of 18 fatalities per hundred thousand inhabitants, like Rockland or Hunterdon? We could still save 130 people. And if we brought VMT down to the regional median per capita VMT of 8,722, like Nassau County, its neighbor to the west? That would mean only 13.1 billion VMT, a 34% reduction, and a 4.3% reduction in the total regional VMT.

What does a 34% reduction in VMT get us, in terms of our goals? It's generally considered to be proportional to pollution. There's a correlation with fatalities, but it's not very close, as the charts show. Think, also, about the budget: in the 2012 state capital budget there was $291 million for Long Island roads. Road capital budgets are notoriously unresponsive to VMT decreases, but a 34% reduction would be hard to ignore. I'd say it would save us at least $50 million a year.

Also, since the VMT reduction is per capita, not from a mass depopulation of the East End, all those people would be taking transit instead. That would probably mean that the North Fork Branch would have enough passengers for hourly service, and the Hampton Jitney would make a killing. People would be walking to the train and to shopping, which would mean more sidewalks on those Long Island road. And you bet your ass there'd be local bus service on Sundays.