Douglas Adams wrote that "In an infinite universe, the one thing sentient life cannot afford to have is a sense of perspective." Still, I feel that a certain amount of perspective would help with a post-mortem on congestion pricing. 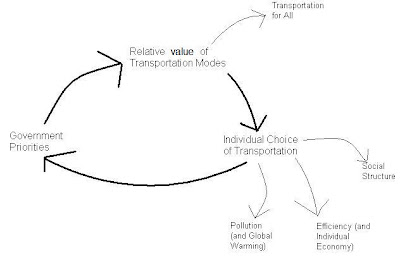 Congestion pricing was never the goal. Who devotes their life to something like that? The goals were, and still are: limiting pollution, increasing efficiency, improving the social structures of our neighborhoods, and furthering the cause of social justice.

Of course, we don't have a ton of money, so if we want to limit pollution, increase efficiency, and maybe limit the carnage as well, we've got no choice but to reduce the value of driving. Congestion pricing was the first measure I've seen that would have seriously reduced the value of driving and had the backing of the Mayor, the Governor, the City Council and the State Senate Majority.

It's time to move on to other things, but let's not lose sight of the fact that we can't have a meaningful impact on global warming, asthma, the economy and the safety of our families without making driving either more expensive or more difficult.
Posted by Cap'n Transit at 10:31 AM