Who Does the City Council Represent?

It would be nice if drivers, pedestrians, transit riders and other road users could all get along. Unfortunately, it doesn't really work out that way. First and most importantly is the carnage: the demand to "move traffic" creates a danger to pedestrians and cyclists - and of course car drivers and passengers themselves. Second, there's only so much land to go around, particularly in a densely settled area like New York, and the more of that land is devoted to cars, the less is available for pedestrians, etc. Third, there's only so much money in the budgets of various transportation funders, and the more money that goes to cars and general-purpose lanes, the less is available for transit, etc. 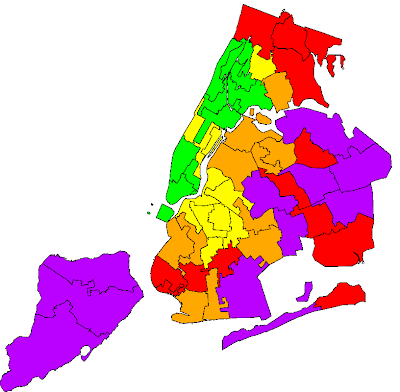 When these conflicts get fought in the City Council, pedestrians, transit riders and cyclists would like to feel that their city council members are fighting for them. Sometimes they are, as in the case of Rosie Mendez, in whose Lower East Side district 81.8% of households do not own a car. Mendez not only voted against caps on pedicabs and for congestion pricing, but rode in a pedicab to participate in a Critical Mass ride in 2007.

Inversely, Jim Oddo represents a central Staten Island district where only 17.7% of households do not own a vehicle. It's not too surprising that he voted for the cap on pedicabs and against congestion pricing, even though it would only have affected 6.2% of his constituents.

The councilmembers are individuals, and their votes on these issues don't always follow the purchases of their constituents. There were some pleasant surprises, such as when Tony Avella (14.9% car-free households) voted against the pedicab cap, or when Michael McMahon (29.2% car-free) voted for congestion pricing.

What's more disturbing is when councilmembers from "green" districts hampered bills that would have helped their constituents. For example, 80.8% of households in Speaker Quinn's district do not own cars, but she sponsored the pedicab cap bill. All ten of the councilmembers from "green" districts voted for congestion pricing, but Alan Gerson waffled on the issue before the vote, potentially giving cover to the "concerns" of assemblymembers like Deborah Glick that ultimately led to the defeat of the plan. A few councilmembers from "yellow" districts, like Brooklyn councilmembers Diana Reyna and Matthieu Eugene, voted for the pedicab cap and against congestion pricing, despite the fact that 70% of the households in Reyna's district and 67.3% in Eugene's don't have a car.
Posted by Cap'n Transit at 1:00 AM

Something seriously needs to be done, to improve the transit in these purple border zones: Staten Island between St. George and Rosebank, Canarsie and Far Rockaways in Brooklyn, and the Jamaica and other outlying Queens sections.

My commuting routine is at such odd times and my yearly income so low, the transit is way too inefficient for these areas and the populations need to commute into Manhattan and denser sections of BK and Qns. I don't need the added cost and hassle of a car, I can't afford one, but the efficiency of travel makes it almost necessary for people like me, who work grave shifts and live far away.