Parkway or highway? Pick one and stick with it

Bob Moses didn't build the first parkways, but he did create some of the most famous ones. Many started out as quiet, four-lane roads surrounded by trees and grass; some even had parallel bicycle and pedestrian paths. A few of these have been minimally altered; you can get a feel for the original design if you visit the Bronx River, Bethpage, Palisades or Jackie Robinson Parkways. On the other hand, most have been widened to the point where they are unrecognizable as parkways. The most outrageous of these is the Southern State Parkway on Long Island, which is now eight lanes wide, double its original width. The Hutchinson River Parkway is eight lanes for part of its length, as is the Grand Central Parkway. The Belt, Cross Island and Northern State are six lanes for most of their lengths. 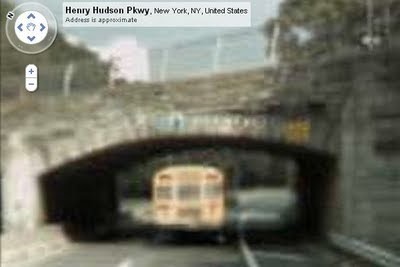 The worst part of this is that most of these parkways forbid any kind of buses from traveling on them. In many cases, Moses actually built bridges that were too low for buses or trucks to safely pass under. The result is a highway that is only available for private cars - the least efficient, most polluting form of ground transportation.

Moses's justification for barring buses and trucks was to provide a bucolic, recreational setting for leisurely drives. But the widenings have obliterated this character of the parkways, turning them into commuter highways like the LIE and the Thruway. Trees have been cut down and grass paved over. In some cases, like the Hutch, the bicycle paths were eliminated. In others, the highway swallowed up the entire "park," leaving nothing but asphalt. So we have noisy, smelly, dangerous, expensive highways that don't even help move buses quicker.

The Garden State Parkway is a disaster in many ways, but at least it allows buses for the entire length. Many bus routes would be excruciating - and have very low ridership, if they survived at all - if they couldn't go on the Garden State.

It's time for New York state to get with the program. Return the parkways to their original four-lane configurations - with suitable modifications for safety - and rebuild the parks and greenways that once surrounded them. Or else give up the Jay Gatsby fantasies, face the reality that you're dealing with commuter highways, and allow buses to use them.

It is true that many of the bridges are too low for full-size buses. The State DOT often replaces parkway bridges, and in recent years they've even been trying to match the aesthetics of the originals; they can do this while raising the height to allow buses. In the meantime, there are many cutaway vans that can fit under these bridges with no problem. Allowing cutaway van service on the Grand Central, Interboro and Belt Parkways would be a big improvement for transit in those corridors.

The nutty Long Island Transportation Plan 2000 envisioned putting "Rapid Commute Vehicles" - don't call them buses! - on some of the parkways. But in a classic highway department move, these would be brand new lanes with "RCV priority." I haven't heard much of LITP 2000 since way back when; let's hope that those widening plans died with it.

Last month, in response to my post about improving bus service to Connecticut, Woody left a good suggestion:

Put bus lanes on the West Side Highway or Henry Hudson Parkway, whatever it's called, from the Port Authority Bus Terminal right up to the George Washington Bridge to Jersey and onto the Cross Bronx Expressway heading east.

Some of the parkways were designed to keep the riffraff -- that's us bus riders -- off these carriage ways by making the overpasses too low and the underpassings unpassable. But I don't think the Henry Hudson suffers from that design feature.

I checked, and in fact the first low bridge on the Henry Hudson is not until 232nd Street. Even beyond there, as you can see above, the Google Street View vehicle followed a full-size school bus all the way to Fieldston Road. That means that it's physically possible for buses to go from 57th Street all the way up to the George Washington Bridge without hitting a light. Let's make it legal.

Actually, you don't even need a busway on the Henry Hudson. You can put a railroad in there, and demolish the highway to build new residential buildings on top of the railroad. At modern tower density, you could put almost as many people in those buildings as there are people driving on the Henry Hudson today.

I think it's possible to also route such a rail line over the GWB, which was built with the possibility of rail service on its lower deck. The main technical difficulties would be getting the line from the low elevation of the highway to the high elevation of the bridge, and going below 57th into Penn Station.

It would be nice to have a railroad instead of the highway, but I'd rather see more parkland on top of it than apartments.

Short-term, though, I'm not even asking for a busway. I'd just like to see buses allowed to use the thing.

I would oppose the addition of buses to the HH on the basis of its effect on air quality in the far west side of Manhattan. Think of this: the Hudson River Greenway runs parallel with the HH. The distance between the roadway surface and the Greenway is maybe 30 feet at most. By adding buses, you'd be creating a tunnel of nasty particulates that would turn the Greenway into a miserable experience. I know the Cap'n tends to be anti rails-to-trails, but still, the Greenway is a real asset and I'd hate to see it rendered unusable.

I would, however, be in favor of permitting small commercial vehicles (like a small plumber's van size vehicle) on the parkway. They're no larger than the monster SUVs I see on the HH on a daily basis.

If you've spent any time on these greenways, you know that the noise and pollution from the cars on these "parkways" is close to unbearable. I actually don't go to the Little Neck Bay greenway on foot any more because the last time it was such a miserable experience.

I don't think that a few buses would really add much to the pollution, especially if they're hybrids. Most of the city's bus fleet now has particulate filters, and I think most modern private long-distance buses do too.

This is like saying, "I was okay with the revolvers, but when the gangstas started bringing Glocks into the bar it totally ruined the atmosphere." Being anywhere near the Henry Hudson Parkway in Manhattan sucks, and buses are not going to make a noticeable difference in that. If pollution along the greenway is that important to you, then fight to get the Parkway cut back to two lanes.

James, the Upper West Side doesn't have air quality problems. The part of Manhattan that does have a serious pollution problem is Upper Manhattan. Putting buses on the HH means fewer cars coming in from New Jersey and Westchester, which will reduce traffic and improve air quality in asthma-choked neighborhoods like Harlem. Even East Harlem could benefit from diversion of Hudson Valley to East Side traffic away from the Triboro.

A bus may pollute more than cars per unit length, but it pollutes much less per unit capacity. Removing cars from the road and reducing congestion near the GWB and the Triboro means fewer people in Harlem getting asthma.

Um Um Um. There already is a railroad along the West Side/Henry Hudson ROW. It's why the West Side/Henry Hudson is there, they ran the new highway over the railroad and threw in a park. Wide enough for four tracks into Midtown if I remember correctly. If you want to go look at it you can peer down into it in the west 40s. Just west of Tenth Ave...

My thought is to put XBLs on the Henry Hudson and try to get all but the MTAs regular buses off Central Park West, Columbus, and Amsterdam, get them out of Harlem, and even divert a few from the East Side Avenues. Right now I see Greyhound or Peter Pan buses heading down the avenue I live on, and where we may get a fully separated bike line in a year or so.

Better to move the buses to the Henry Hudson where the breezes will help to clear the air, and where I ride the Greenway once a week or so, instead of having them on the streets where I ride every day.

And the bonus is to reduce the number of cars rushing into Midtown and Lower Manhattan.

The Empire Line is still there. It's squeezed down to two lanes south of 72nd. It has great potential to carry high-speed trains to Albany and beyond, and for possible MetroNorth service with stations at 125th and a few more spots.

If that's not enough rail capacity, how about decking over the so-called parkway and putting light rail on top of it? Sort of replicating what they did to get Riverside Park in the first place, and better this time around: Park in place of parkway, and no six-lane barrier between the park and the shore.

The point of tower plus rail line development is that the reduction in highway capacity into Midtown is matched by new residences for people to live in where they won't need to drive.

Without extra residential development, closing the Henry Hudson could be counterproductive. Some of the traffic would disappear, but some would move to the FDR. Since East Harlem is choking on exhaust fumes while West Harlem isn't, this would mean less environmental justice and worse public health.