If you care about the G train...

Back in September, I observed that transit lines are often in competition with parallel highways. The main reason that governments have to spend so much money subsidizing transit is because they're spending more money subsidizing roads. As an example, I gave the proposed Tribororx line from Yankee Stadium to Bay Ridge, which is paralleled for much of its length by the Brooklyn-Queens Expressway and the Belt Parkway. How much ridership can we expect this line to have if the State is spending billions to upgrade the competing highway at no direct cost to drivers? 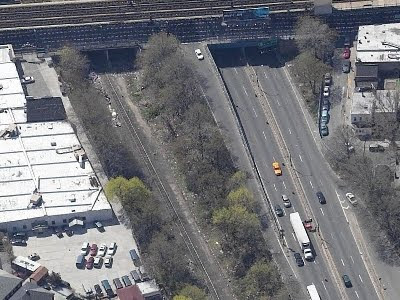 In the comments to my post, Jonathan pointed out that the G subway line also parallels the BQE in this corridor. Historically, the G has had notoriously low ridership. That has begun to change in recent years due to the booming popularity of Williamsburg and Greenpoint, but the MTA still treats it with contempt. After the V train was introduced, the MTA wanted to cut the G back to Court Square at all times. Under pressure from advocates, they agreed to run the G on nights and weekends, when the V was not running. Somehow, though, there seems to be track work on nights and weekends, nine times out of ten. I'm always surprised to actually see the G at Queens Boulevard stations.

The MTA has also run four-car trains on the G. I think they're back up to six cars, but the combination of short cars, truncated service, and infrequent service discourages people from taking the G, which in turn reduces ridership, which leads to more cuts...

The initial low ridership that seems to irk the MTA managers so much can be easily traced to the local-stop configuration of the G train and the BQE. Why would you want to sit through stops at Classon Avenue ... Bedford/Nostrand... Myrtle-Willoughby... Flushing... Broadway... if you can hop on your car and get to Queens without stopping? The alternatives through Manhattan are not much quicker; the E and the F run local, and the A only makes two stops more than the E (Spring Street and 23rd Street).

I have seen this dynamic in person multiple times. Many years ago, my girlfriend lived in Fort Greene and worked at Queens College. She would take the G to the E to the Q74 (or sometimes the A to the E, it didn't really save any time), and the total trip would take her an hour and twenty minutes. A couple years later, one of her colleagues at Queens College rented an apartment in Brooklyn Heights. I asked him if he was prepared for the long commute. Not really, he said. He had a car, and it took him twenty minutes to drive to Queens College.

Once I had a meeting in Brooklyn Heights, and from Woodside I took the 7 to the A, a little more than an hour. That meeting took longer than expected, and I had to rush back to Woodside for another meeting. With that story in mind, I hailed a cab and was home in twenty minutes.

I have a neighbor in Woodside who regularly visits his elderly aunt on Ocean Parkway. He used to spend forever on the F train, but now he takes a car service. If he owned a car himself, I'm sure he would drive.

This is the main reason for the low G train ridership: the state spent a ton of money building the BQE and the Kosciuszko Bridge, and now they're planning to spend another $1.7 billion to replace the Kosciuszko. Not just with another bridge the same width (three lanes in each direction), but with a wider one, with four northbound lanes and five southbound. These added lanes are sold as "reducing congestion," but who are they trying to kid? They'll be filled up with cars in no time.

It's true that the replacement bridge will have a unicycle lane that will make it easier for non-motorized traffic to get from Brooklyn to Queens, but the main thing it will do is make it even easier for people to not use the existing G train infrastructure, or the proposed Tribororx.

The DOT will have the second of two open houses next Wednesday in Greenpoint. They are also accepting comments by email on the project at kosciuszko@dot.state.ny.us. But the public will not be asked whether they want the new bridge to have nine lanes instead of six like the old one, or even to decrease the number of lanes to four in order to save money and encourage people to use transit. They will not be asked whether there should be tolls on the bridge to help pay the enormous cost, and to discourage overuse. No, they will be asked which of four "designs" they prefer, with the difference being mostly cosmetic. As with the Tappan Zee Bridge, the most important decision - how many lanes - was taken by the DOT without soliciting public input.

Henry Ford is quoted as saying that customers could buy the Model T "in any color, as long as it's black." In this case, you can have your bridge in any design you want, as long as it costs $1.7 billion dollars and has nine lanes to encourage lots of driving and draw riders off the G train.
Posted by Cap'n Transit at 11:21 PM

Cap'n: Thanks for mentioning my original comment. I used to live on a Brooklyn block with a G train stop at the corner, and my downstairs neighbor commuted to Forest Hills using the G train's one-seat ride.

The service suffers from the lack of a one-seat ride to Manhattan. If a connection was built in Williamsburg from the L train tunnel to the G train line, the MTA could run service from Queens Boulevard through to 14th Street. A one-seat ride from Bedford-Nostrand (via switching tracks at Hoyt-Schermerhorn) to Manhattan IND service would also be a winner.

The G's problem is not highway competition; it's that along the waterfront its only non-IND transfer is to the L at Williamsburg. If the IND had the intelligence to build the G to intersect Queensboro Plaza and Atlantic/Pacific, it would have much higher ridership.

The one-seat ride is a non-issue given good connections, and may actually backfire by screwing with frequencies.

Alon, I agree with you about the oversight with transfer stations. Of course, if the IND Second System had been built, the G would have had a simple stairway transfer at Broadway/South 4th St/Union Ave to Manhattan service via Houston and Worth Streets.

It wasn't an oversight. The IND was deliberately built to be minimally compatible with existing lines, even though the city had already intended to take over the IRT and BMT in the future.

The Second System transfers would have made the G only somewhat more useful. South 4th would have probably become an important transfer station, but it would never have been Atlantic/Pacific, and would not have addressed the lack of transfer in Queens.

As a former Greenpointer, I say nice post, and apt observation as to the realities of "choice".

But I quibble with the notion that the BQE is quick or convenient, except at 3AM. During much of the workweek, there's no way that it's faster to drive from say LIC to downtown Brooklyn, much less park there.

Also, at least in my experience, the IND connections aren't really that awful. If you are going to midtown, the E/V is fine and if you are going to lower Manhattan it's often easier to go via Jay St. than to put up with the inbound Queens rush.

I left the 'hood still annoyed about gentrification and the L becoming crowded so I have no comment there.