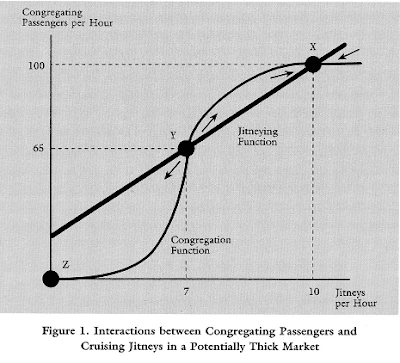 We know that jitney service can be profitable, as illustrated by the graph above, but that it requires a certain level of ridership (a "thick market" in terms of the authors of this graph). Below that there is a vicious cycle: jitneys run less frequently in order to allow more riders to collect at stops, but many riders will give up if they have to wait longer. In response, the jitneys run even less frequently, and eventually give up.

In theory, then, the route is completely unprofitable, and thus a candidate for subsidized "coverage" service. But with only coverage service, buses are infrequent, schedules are inflexible, and routes may be bent to serve low-ridership but politically expedient destinations. This can make the service less valuable to potential riders, which in turn can lead to "empty bus" accusations and make budget cuts more likely than they already are for coverage service.

If there is even minimal scheduled service, however, this changes. Economist Dan Klein, his student Binyam Reja, and the generally anti-transit Reason Foundation vice-president Adrian Moore have written an entire book about this, based on a fairly wide-ranging study of private bus transportation. They summarize their argument in an article for something called The Independent Review (PDF). I think that it should be read by every transit advocate, at the very least to get a sense of what is possible outside the box of regional authorities and "bus rapid transit."

Klein, Reja and Moore call this scheduled service an "anchor": if riders know that even if the jitney doesn't show up there will be a bus every fifteen minutes or so, they are more likely to wait. This means more passengers for the jitneys, so the jitneys will run more frequently. The presence of minimal scheduled service can make jitney service profitable - even profitable enough that the jitneys could cross-subsidize it. 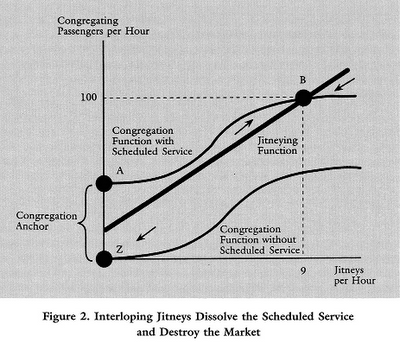 This scheduled service could be run by a public agency. Klein and friends, being libertarians, come up with the novel solution of auctioning "curb rights": in exchange for providing scheduled anchor service, a company gets a separate bus stop where by law only it has the right to pick up passengers.

It seems to me that a similar minimum service could be achieved by simply paying a driver to make one unprofitable run every fifteen minutes, or even with a kind of insurance plan where drivers contribute a certain amount per week/month/year and are guaranteed a minimum amount per hour. This does nor have to be done by the government; it can be arranged by the jitney syndicate.

Let me reiterate that I am not a fan of libertarian ideology. I regard a small-government solution to an economic problem the way I would a ship in a bottle: an example of working within constraints that shows off the cleverness of the problem-solver. Practically speaking, though, we're being forced to build our ship in a bottle forged by the likes of Richard Brodsky and Pedro Espada. We need small-government solutions, because the amount of service we actually get from our current government is small.

We need higher-frequency, more flexible bus service, and Dan Klein and his friends have shown us how we can have it without depending too much on our corrupt, unrepresentative government. Let's use what they've given us, and if we ever manage to claw back some decent transit funding, we can decide what to do with it then.
Posted by Cap'n Transit at 11:11 PM

You don't need libertarian philosophy nor do you need small government. You need low operating costs.

By lowering operating costs, you can provide more transit for less money. You can increase frequencies without fare increases.

Ahem, Saosebastiao! Low operating costs are good, but I think you're vastly overstating their importance.

I haven't read the Lave article you link to, but from the abstract it's pretty clear that he's not taking into account declines in ridership due to competition from subsidized roads.

Cap'n Transit - If you'd like to see jitneys operating somewhat like you describe (where the operators themselves cover both high density and low density times and route extensions by rotating the days and times they operate), go to Atlantic City and watch the jitney operations there.

Note, however, that even in that model, the Jitney Association put pressure through elected officials on NJ Transit to such a degree that NJ Transit bought them an entire new fleet of vehicles.

I wish you would tell my transit agency that every fifteen minutes is minimal frequency.