A missed opportunity for rail-oriented development

Another of the many things that make the overnight casino bus crash so frustrating is that even if there was no possibility of changing the law to allow gambling closer to the city, the location they used would still have been ideal for rail. 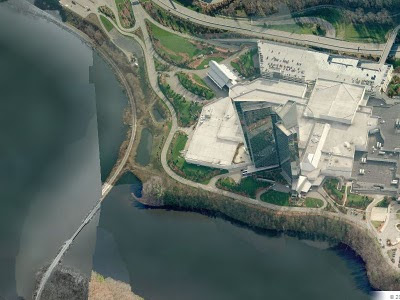 Satellite Photo: Bing Birds-eye view
As Arcady pointed out in the comments to my first post on this topic, the casino that the bus was returning from, Mohegan Sun, is located right next to the New London and Northern, an active freight line that is currently part of the New England Central Railway. It would have been a tiny part of the resort's construction budget to build a station there.

Mohegan Sun is one of the largest casinos in the country. Curiously, its biggest competitor, Foxwoods, is just a few miles away across the Thames River. Foxwoods is located at 350 Trolley Line Boulevard, so named because a branch of the Shore Line Electric Railway ran down it. I don't have any maps or pictures of the old line, so I don't know how easy it would be to rebuild it or to link it to the nearby Providence and Worcester line, but the location was once served by rail.

The Foxwoods website says that it's served by over a hundred buses a day. According to the Mohegan Sun website, over twenty buses a day arrive there, but I think the real number is higher. There is definitely the ridership to justify reactivating passenger service on that line. Arcady writes, "they'd need a new station and permission to run more trains across that drawbridge east of Old Saybrook."

It's true that there are only five Shore Line East trains a day that cross the bridge. It's also true that most of the Amtrak trains that go through New London are pretty full. But the Shore Line East trains could be extended to Mohegan Sun and beyond, to Norwich, Willimantic and even Mansfield Depot, just a few miles from the University of Connecticut. If the line is electrified, trains could run directly from Penn Station or possibly Grand Central.

The Niantic River Bridge is being replaced, and the new bridge will allow for more trains, and the upgrades to the Hartford-Springfield line could relieve some of the congestion on the Shore Line, but it's still a drawbridge that has to be raised for boats to go under, and the number of trains will be limited.

Some of the trains could be operated as shuttles from New London, or perhaps even Providence with an awkward change in direction. Would gamblers from, say, Chinatown, put up with a three seat ride (subway, mainline train, shuttle) instead of a one-seat bus? Probably not during rush hours, but during off-hours they could get a two-seat ride, and it might just boost ridership enough to make regular local service on these lines viable.

If you're thinking it's too expensive, just take a look at satellite photos of the area, and marvel at the amount of money that was spent on bringing cars to these resorts. New stations at Mohegan Sun and Norwich would cost a fraction of one of those parking lots, and rehabbing the rail line would be within the same range. The main point is that these casinos could have been major drivers of rail expansion in the area, but instead they were boosters of the road infrastructure.
Posted by Cap'n Transit at 1:51 AM

Various attempts at rail service to Atlantic City casinos (with free shuttles from the train station) have been failures. Amtrak pulled out. ACES is suspended. NJ Transit's Atlantic City Rail Line ridership is low and in decline despite fares being set at half of other NJ Transit rail fares for similar distance travel.

It's not just an observation, Busplanner, you're trying to make a point. You can come out and say it, but try to avoid transportation myopia while you're doing it.

My "observation" was an observation about a different casino market than the one you were discussing. Admittedly, I did post it to encourage readers to consider what happened in another rail casino market.

At the same time, each market is different. I do not see anything "myopic" in my posting, just as I do not see your failure to mention the poor results of the Atlantic City rail efforts in your original post "transportation myopia" on your part.

Yes, you left out a big part of the market: the main competition to whatever transit system is put in place. There's no point in considering earlier efforts if you don't consider the entire set of circumstances. I suggest you read my page on Transportation Myopia. That's why I made it a page.

Two things, Cap'n. First, it's not transportation myopia to say that those casinos are located in unwalkable areas and have no interest in changing that because only a low-rolling minority of their customers would care.

Second, the cost of constructing special infrastructure to these developments is often huge - for example, the cost of the Meadowlands spur was about the same as that of a European subway. Part of it is standard American incompetence, but part of it isn't. Casino operators have no incentive to help keep costs down, there's no community consensus process, etc. Instead of wagging the dog, set up development where the infrastructure already exists, i.e. any of the towns near New York on convenient rail lines.

I back up what Alon says. It's much easier to build a casino next to a railroad station that already exists than to build a railroad to the casino, bearing in mind the service patterns that are necessary.

Jarrett Walker, the Human Transit blogger, would probably suggest putting the casino at the end of some existing rail line, in order to increase demand for service at the distal terminus. How about Poughkeepsie?

If the point is to make the casino easily accessible by transit, then it's bad strategy to put it 2 hours away by train, in an area where density is so low most patrons would drive. It would be much better to put it in a walkable area that sees high-quality, high-frequency transit service, so that fewer people would choose to drive.

Or instead the city could decide that it doesn't need more tourists, and go for smaller locals casinos. This would mean a different set of zoning rules - e.g. casinos are permitted but with a limit on size.

Any NYC-Atlantic City service will suffer from two problems: congestion at the NY Penn end, and an indirect route that goes via Philadelphia. There's also the change in motive power, since the NY terminal requires electric trains, while the Atlantic City Line is not electrified. A service to Mohegan Sun can be run on a fairly direct route from Grand Central, which is less congested, and can use Metro North's dual mode diesels, which means there's no stop to change motive power. As for the casinos themselves, remember that they are bound by the same zoning rules as everyone else, and need to provide that giant sea of parking regardless of whether there is a train station nearby or not, so they have an incentive to locate where it's easier to build that parking rather that near a train station or city.

No, Arcady, the tribal casinos are not bound by Connecticut zoning regulations. Tribal sovereignty, remember? The Mohegan compact only says that they have to build good roads, and the Pequot compact is pretty much identical on that score. They could build a new city there with no parking whatsoever, and nobody could say boo about it.