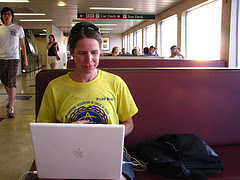 People can get things done on the ferry from Bainbridge Island to Seattle. Photo: tbone_sandwich / Flickr
The most frustrating thing about the latest Census report is that it lumps together car commutes and transit commutes. Many people (for example, the Consumerist, the the Asbury Park Press, and the Los Angeles Times) recognize that an hour on transit is easier to deal with than an hour behind the wheel, but nobody seems to have bothered to separate them out. Until me.

Here are the ten cities with the longest commutes, lumping together all modes like the L.A. Times and Marketwatch did, following the example of the Census Bureau themselves (PDF). I've put in the overall Mean travel time, but I've also included a column for "Drive time" that includes only car, truck and van trips, and a column for "Transit time" that includes only transit trips. The extra time that transit users spend is labeled as the "transit time cost":


You'll notice that with their large transit mode share, the average 50-minute transit time brings up the average New York City commute four minutes, and the 67-minute transit time from Bremerton-Silverdale brings their commute time up two minutes. But the small number of transit commuters in San Juan, Riverside and Atlanta actually bring the overall travel time down by a minute each. If we just look at drive time, we get a different picture:


This puts DC first, and New York City ninth, in drive time. Baltimore, Atlanta and Yuba City are all ahead of Chicago. Bremerton-Silverdale has slipped to 27th place, and tenth place is now taken by Vallejo-Fairfield, California, formerly eleventh.

In the past, this "longest commute" story has been used to drum up sympathy for drivers stuck in traffic and glorify small towns. Well, not in New York. Here in New York, we're in the top ten for drive time, but we're not number one. We're behind DC, San Juan, Atlanta and Chicago, as well as the crazy exurban drivers in Poughkeepsie, Riverside and Yuba City.

I'll talk about transit times later.
Posted by Cap'n Transit at 11:00 AM

I'm amazed at the similarity in transit "time cost" here. New York's transit commuters spend 21 minutes more, but Riversiders only 30 minutes more? I'm guessing there's a selection bias issue here, where people will only take transit for commutes that are less than some multiple of drive time. (Because I know there are plenty of transit trips that are 3, 4 and even 5 times longer than driving out here.)

I should also add my standard disclaimer: Any analysis of the Riverside-San Bernardino-Ontario MSA should take into account that the MSA is larger than the 9 smallest states, covering two of the largest counties in the nation. So the really crazy exurban drivers are often not from Riverside at all, but from places like Victorville, Hemet, and Temecula, all of which became "drive-until-you-qualify" exurbs over the last decade or so.

Transit time is high if you commute long distances to the CBD. It explains Poughkeepsie-Newburgh perfectly: transit riders there tend to be people who take the train to Manhattan. In general, high travel time is a feature of a certain commuting pattern that transit is good at serving, rather than an inherent feature of transit.