When is the MTA going to stop sending limiteds all day long?

Last night the 92nd Street Y hosted a debate for candidates for the Republican nomination for Mayor of New York. Members of the Y submitted questions to a camera crew on the sidewalk in front of the building, and the questions were then projected onto a screen behind the candidates. A lot of people seemed to be amused by a question posed by an Upper East Side resident, which you can see at 39:10 on the video. 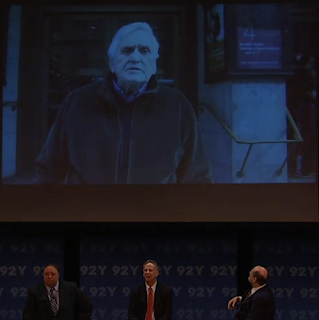 My name is Selig Alpern. I've been living in Manhattan all my life. I am 89 years old. We have 4 to 5 limiteds flying down Lexington Avenue, and we have to wait 20 minutes for a local. From 10 o'clock in the morning to 4 o'clock in the afternoon there should be no limiteds. There should only be limiteds from 4 to 7 and 7 to 10 in the morning. When is the MTA going to stop sending limiteds all day long? They are not necessary from 10 in the morning to 4pm. It's a pet peeve of mine, and I wish it would be corrected.

Alpern was described as "ranting," "railing," "ornery," "upset," and "angry," but I think a lot of it was just him speaking loudly and clearly in order to be heard over the noise of Lexington Avenue. I thought his concern was valid, but his prescription was wrong, and then he undermined the whole thing and set himself up to be taken as a crank by calling it a "pet peeve." Transit frequency is not a pet peeve.

For the local buses, the M102 comes at 12:11, 12:31 and 12:51, and the M103 comes at 12:06, 12:21, 12:36 and 12:51. If you're not going below Eighth Street you can take either one, so I'll treat them as equivalent. That makes seven buses an hour, for an average frequency of eight minutes. One problem is that the headways are uneven, ranging from zero to fifteen minutes. If one of those buses is even a little bit late, it could lead to exactly the situation that Alpern complained about: being stuck for twenty minutes at a local stop watching one limited after another fly by.

We should definitely not eliminate midday limited service. How does it look for a Jewish guy from East 68th Street to tell the MTA to add ten minutes to every limited bus trip going from Harlem downtown? But it would be appropriate to tweak the schedule and run one or two buses on the local route instead of the limited route.

Better yet, who's to say that we have to get rid of buses on one route in order to add buses to another? Why not add more M102 and M103 buses without getting rid of M101s?

Some of this depends on the "loading guidelines." You don't want to run too many empty buses. That said, you could run regular buses instead of articulated ("bendy") buses if you want higher frequency.

Steve "BicyclesOnly" Vaccaro tweeted that he cared about, "What are candidate's position on BRT?" And that's an excellent question. Why aren't there bus lanes on Lexington Avenue?

Alpern's question highlighted a major problem in New York today: the despondent tone of so much of transit advocacy. Why do so many people think it's a zero-sum game, where we've given over Lexington Avenue to the cars, and Jews and Puerto Ricans have to fight each other over the scraps of bus service that crawl along wherever they can fit in?

The candidates' responses to that question, and the Democrats' responses to another transit question, were revealing. None of them mentioned "BRT," or even buzzwordless bus improvements. But George McDonald did say he looks forward to the Second Avenue Subway opening, and predicted that it would relieve crowding on the Lexington Avenue buses. No word if he would do anything as mayor to help get the rest of the line built, or even finish Phase 1, but at least it was hopeful and forward-looking.
Posted by Cap'n Transit at 1:14 AM

If an agency's trying to suppress costs, more limiteds than locals make sense; obviously a shorter roundtrip means fewer driver hours. This stands especially given a significant cross-elasticity (read: many passengers are choosing whether to get a local bus at the end of the street or walk a bit further, and the relative frequency of routes affects that decision).

On some New York avenues, that's affected by cross-elasticity with the subway. In the absence of off-peak limited buses, I suspect there would be transfer to the subway. As existing off-peak trains could absorb limited bus riders, that could make financial sense.

One could counter-argue that since the subway is fastest at present, users of the limited would seem to be determined to use the bus. Reasons could be the number of stairs they can handle, ability to stand, personal safety concerns, or something else.

So the cost implication of removing the limited seems unclear in the case of avenues with subways; I'd say that it merits study.

A separate issue here is one that infuriates me frequently - the overlaying of routes of different headways for significant stretches.

In this instance, take out one 101 limited for one 102 local every hour, and a combined 7/8 minute headway becomes possible (as opposed to 5, 10 and 15 minute gaps), with only a small frequency loss to the 101.

More generally, the overlaying of different routes happens a lot in Manhattan, both suppressing frequencies and making buses far more complex than they need to be. Manhattan's perfectly regular grid could permit a simple grid of extremely frequent buses (hence with extremely short transfers between N-S and E-W buses).

How much influence does a mayor have on this state agency? (honest question -- I'm on the west coast)

Exactly Zoltan...the MTA is driving passengers to walk further by running more limiteds. Ideally, I would synchronize local service in a limited stop corridor so that you don't have the silliness shown by the example provided.

I'm all for walking a bit further if that means more efficient transit service. It's good for health, good for transit speeds that better compete with cars and good for efficient operations.

In most of Northern Europe, no one even thinks of bus stops closer than 400m (1200ft) together. That means the bus is faster there than in US cities.

I wouldn't say the Manhattan locals should be the same. Manhattan's high transit demand means it can merit locals that serve seniors and the less able to walk well, and that's a good thing.

As for everyone else, they're not coerced into walking further since the local exists, but doing so can benefit them and the MTA's bottom line

All this said, co-ordinated schedules and minor transfers of resources that allow the local buses to operate at short, consistent headways are certainly a good thing.

The runtime being shorter on the M101 would be true if the distance was the same length as the locals, but it's not. The M101 goes all the way to Washington Heights while the M102 & M103 end in Harlem & East Harlem respectively (and the M101 has to deal with 125th Street crosstown traffic).

So since they're not short-turning any M101s, it's actually a little cheaper to run the local routes.

What they could do is have the M101 run limited along Amsterdam (since the M100 runs frequently, and has fewer scheduled gaps than the M102/103). With the buses saved with the shorter runtime, you can add one bus an hour to the M102, thus achieving those evenly spaced 7-8 minute headways.

Of course, if you add bus lanes (though there might be some already. I'm not sure), then you address reliability as well (since 7-8 minutes can still become 20 minutes when you factor in traffic).