Detroit is not a city

Last month, the municipality of the City of Detroit filed for bankruptcy. Every so often Detroit is in the news for some symptom of urban decline: its famous ruins, particularly the Central Station; its vacant houses bulldozed to vacant lots, which have fed the fantasies of so many urban farmers; its cutbacks to emergency services, which result in hour-plus wait times; its transit history of trolleys torn up and replaced by promises; its half-assed projects like the People Mover and the light rail that may one day appear; the demands that the municipality sell the collection of its Institute of Art to pay its debts. The median household income is $31,011.

I've long avoided talking about Detroit, because I've never really been there. I passed through once, changing buses, and again on my way back from the same trip, but it was at night and I never left the bus station. But all this pointless chatter about bankruptcies and vacant lots misses an essential point, one that's true of most urban areas.

The problem with all these stories is that Detroit is not a city. Sure, it's a municipal corporation chartered by the State of Michigan. But it's not a coherent urban system, just as New York City and the City of Los Angeles and the City of Chicago are not really cities. Greater New York, including everything from Montauk to New Brunswick and from Asbury Park to Poughkeepsie, and more, is a city. Metro Detroit, including at least Oakland and Macomb counties in Michigan and Essex County in Ontario, is a city. 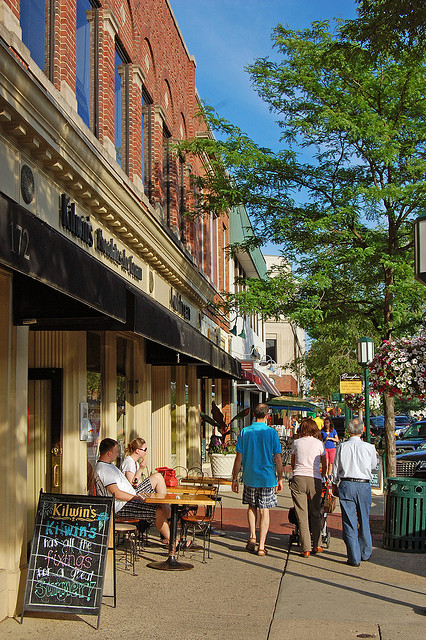 The city of Metro Detroit contains vibrant, well-maintained shopping areas full of white people, like this one in the administrative municipality of Birmingham.
If we look at Metro Detroit as a city, the picture looks a lot better. The median household income for the Detroit Metropolitan Statistical Area is $48,198 Eight of Michigan's top ten richest municipalities are in Metro Detroit, all with per capita incomes above $59,000. Windsor, Ontario, just across the river, had a median family income of $72,204 CAD in 2006.

Windsor also had no homicides for over two years. Metro Detroit contains places like Bloomfield Hills, with a world-class golf course and an art school featuring impressively manicured grounds and stunning architecture.

For many years Metro Detroit has been segregated, with black people living in the municipality of Detroit and white people living in the surrounding suburbs, although that has been changing lately with black people moving to some of the inner suburbs. The boundary between the municipality and the northern suburbs of Oakland County, 8 Mile Road, has long been an object of fascination of alienated white suburbanites, as highlighted by the musician Eminem and others.

These white suburbs are not all doing so well, but for years they prospered as the municipality declined. Some have argued that the city of Metro Detroit is now declining because it didn't take care of its center. I don't have the space or the expertise to comment on what caused the city to decline or what could save it, but I will point out, as a caller to the KunstlerCast observed years ago, that the city still has the same things going for it that led Henry Ford and other automakers to build their factories there: a key position on shipping routes. Essentially, you could argue that the suburbs have cut the city off by reconfiguring those shipping routes. I don't know what to do to reverse that, or at least to provide some justice and keep valuable riverside space from being wasted, but I hope somebody figures it out.

I've been happy to see that some people commenting on the bankruptcy have acknowledged that Detroit doesn't stop at the municipal boundary. Among them are Andrew Heath, Ariella Cohen, and the Planet Money team.

To someone who's observed regional issues unfolding in my own city of Greater New York and many others, this stuff is all pretty obvious. But for a lot of other people who talk about Detroit, the parts of the city across 8 Mile Road and across the river don't exist; they might as well be in Minnesota or Pennsylvania. I have a rule for reading news about the economic fortune of "Detroit": does it mention what's going on in Bloomfield Hills, or Grosse Pointe, or Windsor? If not, I close the tab immediately or skip to the next podcast. Because if they miss that part of the story, you have to wonder what else they're missing.
Posted by Cap'n Transit at 1:08 AM

Email ThisBlogThis!Share to TwitterShare to FacebookShare to Pinterest
Labels: land use, media, sprawl

In my humble opinion, Los Angeles County is a hugely underappreciated entity. Acting on behalf of 10 million people over 4700 square miles, it's the closest thing the US has to a real metro government. The existence of cities within the county complicates things, but the county is run by real politicians that answer to real voters. That means the county has some teeth, and doesn't fear for its political existence - unlike your typical regional agency that exists at the pleasure of politicians from different counties or states.

Detroit the city is also in sharp decline, but it's a different picture from the decline of the part of the city that's in the municipality of Detroit. Metro Detroit was doing okay until about 2000, but has had negative income growth since as well as negative population growth. It can't get any more segregated already - in 2000 the segregated black ghetto was not bankrupt and in 2013 it is. What went on between the 1950s and the 1990s was a lot of relative decline and population stagnation, but the real trend then was the segregation into a poor black city (and some inner suburbs) and middle-class and rich white suburbs. What's gone on since about 2000 is a different story.

Re: shipping routes: your point is a bit off-base here I think. I am not from Detroit but I did sail as a mariner on the Lakes for a bit and I can assure you that many ships still go into Detroit compared to other lake ports (is #42 on this list but #3 among US Great Lakes ports http://en.wikipedia.org/wiki/List_of_ports_in_the_United_States ). The problem is that Lakes marine traffic does not seem to correlate with what most people would consider exceptionally successful (Duluth/Superior is #1). Part of the reason, I imagine, is that in general, the harbor supports far fewer jobs than it used to thanks to economies of scale and automation. And certainly there must be ways (which I 100% support) to increase marine traffic. But it's not going to be a decisive factor in any recovery and it's not to blame for Detroit's demise. They built cars in Flint, too, which is landlocked, and Flint is in terrible shape and worse than Detroit, bankruptcy notwithstanding. Conversely, Saginaw is a significant Lakes port sans auto industry and is also really depressed.