The safety culture of Northern Boulevard

On December 20, eight-year-old Noshat Nahian was walking with his older sister to P.S. 152 in Woodside, just before the 8:00 AM bell. As they crossed Northern Boulevard at 61st Street, a truck driver turned his vehicle in front of the boy and killed him with its back wheels.

This concerns me directly. My child is not much older than Nahian, and goes to a similar school near a similar big ugly stroad. This could have been my kid. I'm heartened that the new group Make Queens Safer and the Bangladeshi community have helped focus media attention on this tragedy, and that City Council member Jimmy Van Bramer and State Senator Michael Gianaris have promised to fight for changes.

In that light, I want to highlight three factors that I see in this boy's death, and talk about some of the things we can do about them. The first is safety culture. A few hours after the crash, Streetsblog contrasted the treatment of truck drivers with the Federal government's response to the first fatal Metro-North train crash in over thirty years, that killed four people:

Will @NTSB review this truck company's "safety culture" after one of its unlicensed drivers killed a third-grader? http://t.co/RvCEn2vkw1

The Streetsblog editors make an important point: large numbers of people are killed by commercial drivers on our streets every year, with little oversight. Among the worst places for this are industrial areas like northern Woodside, and big stroads like Northern Boulevard. There's an atmosphere of negligence and lawlessness, and of disrespect for pedestrians, that permeates these places, and when they're mixed with houses and schools, children die. I visited the area on Saturday and took a few pictures to give you a sense of the "safety culture" or lack thereof. 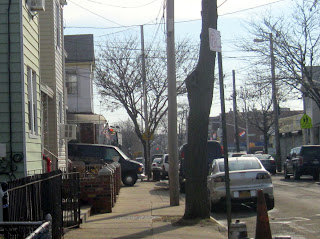 This is what young Noshat saw a few minutes before his death: the sidewalk on the east side of 61st Street just north of Northern Boulevard. As is utterly typical in this area, it was mostly blocked by someone's van. In the boy's few weeks in the United States, he must have quickly learned to walk around large, deadly vehicles. 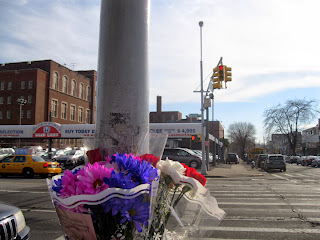 Looking past the temporary memorial to Noshat Nahian, you can see that this is also happening on the same block as P.S. 152: the car dealership has parked their wares on the sidewalk. Kids going to and from school just have to squeeze around them. 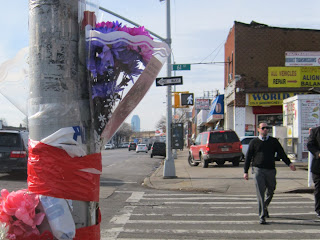 This is the view west along Northern Boulevard towards the Citibank building. A large SUV is driving on the sidewalk, I believe to park. The sidewalk is also partly blocked by a sedan. 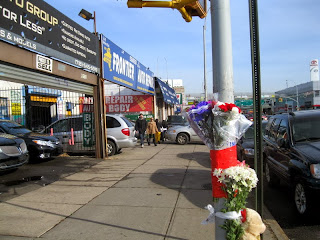 This is the view east towards the Brooklyn-Queens Expressway. As I took this picture, the staff of Frontier Auto Repair was busy arranging their customers' cars on the sidewalk, and the Saturday morning shoppers were simply an inconvenience to drive around. The day after a kid was killed in front of their store. It's the same when school is in session.

In the days since the killing, reporters have revealed that the driver, Mauricio Osorio-Palaminos, had his driving privileges suspended in New York in 2010 for "driving a commercial vehicle on a road that did not permit that kind of traffic," and then failing to pay the fine, but apparently there was no way to enforce this. His license, granted in New Jersey, was suspended three times as he racked up seventeen violations since 1985, including failing to obey traffic signals, speeding and dangerous driving, but was valid last Friday morning when he killed Noshat Nahian.

I've talked to people like Osorio-Palominos. They almost never have to cross a stroad like Northern Boulevard next to a tractor-trailer, and neither do their kids. They have absolutely no clue that they're putting anyone's life in danger when they drive a truck off a truck route, or speed, or run a light. They see any police activity as random harassment by the government, unrelated to safety, for the sole purpose of shaking them down for money. And like the people at Frontier Auto Repair, they see people like you and me, and kids like my own and like Noshat Nahian, as just stuff in the way of getting their jobs done. That's the "safety culture" of people who drive for a living in Queens. It's bullshit, it's killing our kids, and it needs to change.

A big part of the problem is that the people whose job it is to enforce all these laws and rules, the NYPD, the traffic courts, and the DMV, see this enforcement the exact same way: either as rigid bureaucratic rules that they have to crack down on, or as an opportunity to shake down businesses for the city. They don't see their role as keeping me and my kid safe. That's something that I hope Bill Bratton will change. He didn't change it when he ran the NYPD back in the 1990s, but if our new Mayor de Blasio is serious about his "Vision Zero," hopefully it will trickle down to the traffic cops.

Our District Attorney, Richard Brown, has shown very little interest in traffic justice (or any kind of justice), and I don't really have much hope for him. I was very heartened last month by the defeat of Joe Hynes in Brooklyn by Ken Thompson, which gives me hope that in 2015 we won't bring Brown back for a seventh term, but we'll see how that goes. And Raymond Martinez, Chief Administrator of the New Jersey Motor Vehicle Commission? Has anyone asked him how Osorio-Palominos was able to get back behind the wheel of a truck with that record? Apparently not.

Who are the leaders of this "safety culture"? Who sets the tone? The New Jersey Motor Truck Association? The Queens Chamber of Commerce? These drivers don't exist in a vacuum. They get their cues about what's right and wrong, and how to manage the tradeoff between profits and lives, from somewhere. If we want to change the safety culture of this area, we need to find out who they are and hold them responsible.

That's one factor. I'll talk about the others later.
Posted by Cap'n Transit at 2:14 AM

In case anyone's wondering, the few dozen blocks around the school are zoned R5 (1.25 FAR, parking required for 85% of units without exceptions for small buildings).

But outside of those few blocks, it's mostly surrounded by "manufacturing" lands, which of course in NYC means auto repair and auto-oriented warehouses and self-storage facilities. That land is zoned M1-1 (commercial and industrial uses, FAR 1, parking required). The Department of City Planning has essentially mandated that cars and trucks will be the economic lifeblood of this neighborhood, so good luck changing attitudes towards them.

This is one of the best pieces I have ever read about our local traffic dangers in Queens and specifically Northern Blvd. Please, do join Make Queens Safer! The status quo on the acceptibility of pedestrain carnage is changing, Vision Zero is going to happen in NYC.

Excellent post. We look forward to the next installment. In the meantime, we have linked to this post from our "Better Northern Boulevard" campaign page. We need help finding the ideas and momentum to transform Northern.
http://makequeenssafer.org/home/projects/a-better-northern-boulevard/