The challenge of our generation

Rents are rising in cities across the country, and people who can’t afford the new rents have to go somewhere. At CNU 22 in June, Mike Lydon observed (48:15) that “We’re completely unprepared to put people who have the least resources out on the edge … thirty miles from downtown.” Chuck Marohn declared that “the challenge of our generation is to make sure that we don’t leave those people behind.” You can see their conversation with Jason Roberts and Joe Minicozzi, recorded by Gracen Johnson for Strong Towns, or listen to it on the latest Strong Towns podcast.

You got the call, people. Let’s rise to that challenge! I think the best way to deal with it is to bring prices down by building a diversity of relatively dense housing where there already is good transit, but many people will move to the suburbs, and some already have. WNYC made an incredibly useful map showing median income by census tract, based on the 2007-2012 American Community Survey. Here’s the New York area: 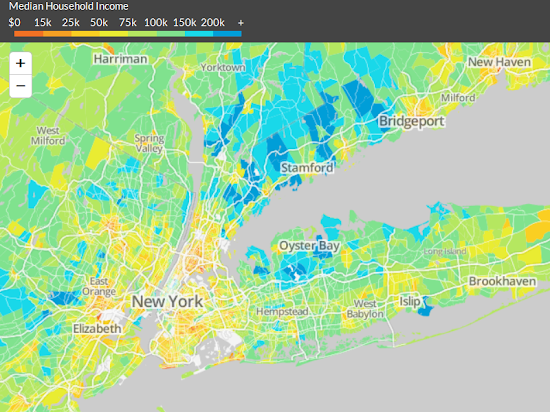 Interestingly, on this map the real concentrated poverty that we see in Fort Greene or West Farms – census tracts with median household incomes below fifteen thousand dollars – is only found in three places outside of New York city: Bridgeport, New Haven and the Seth Boyden and Otto Kretchmer projects in Newark (now closed). Instead, there are a lot of census tracts with median incomes between $15,000 and $25,000 a year. But outside of New York, Bridgeport and New Haven those are found in only a handful of other cities. In the rest of the metro area, median income is over $25,000.

The towns that have census tracts with median incomes between $15,000 and 25,000 are as follows: In New York State, Yonkers, Mount Vernon (one project), Spring Valley and Kiryas Joel. In New Jersey it’s Jersey City, North Bergen, Newark, Elizabeth, Asbury Park, Passaic and Paterson.

The primary challenge with the "suburbanization of poverty" is that the farther out people move, the harder it is for them to access good-paying jobs. Someone who is displaced from Fort Greene in Brooklyn to the West Ward of Newark trades a 45-minute subway ride for a trip on a bus to a commuter train to a subway that can take over an hour. Interestingly, it's not so much the cost of transportation that's the problem, as we can see by looking at the Center for Neighborhood Technology's Housing+Transportation index. In all these areas, housing and transportation costs combined were less than 45% of household income (indicated by yellow), which was often not the case for "wealthier" areas nearby (indicated by blue). 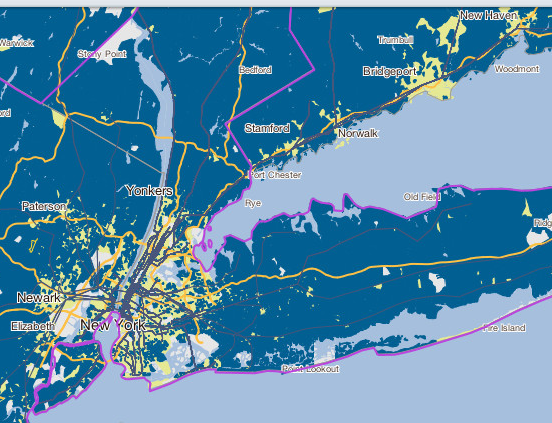 Here's the tricky part: these are based on the reports of people who had work, so they could by definition afford their commutes. It may be that the reason they can't access better-paying jobs is that they couldn't afford the commute, but we don't know that. Giving the H+T data the benefit of the doubt, we should focus on making the commute to better-paying jobs quicker, not just cheaper. That means increasing the capacity of the routes to job centers - primarily New Jersey Transit and Metro-North trains - and bringing rapid service to places, like Newark's West Ward and Yonkers's Schlobohm Houses, that are currently only accessible by relatively slow buses.

In future posts I'll talk about some potential investments that could improve job access from these areas.
Posted by Cap'n Transit at 1:33 AM

Not sure whether you are trying to encourage more density, or improve our commuter rail systems so that they make commuting long distances faster.

Either way, there are some major trends happening that are antithetical to both these approaches, and they're things you have pointed out in your previous posts:

(1) Job Sprawl: its happening, and it is happening in places that are remote from transit. Even when suburban and exurban jobs are created near a commuter rail line, there is no way to walk from the station to the job. Often it is just too long a walk, or separated by a huge barrier like a highway or a suburban cul-de-sac.

(2) Development around commuter rail stations is grindingly slow for housing. Forget about large employers. And the glut of office space in places like Westchester means that nobody is building anything except big box retail, which is allergic to transit and walking, and is surrounded by a sea of parking lots.

Cap'n I'm not sure you can use the CNT map the way you want to.

When I look at their map it tells me that Plandome NY, block group 360593015002 has housing + transportation costs of 90.86% of income, and housing costs of 67.52%. Those are not percentages of their income, but of $63,553, the regional typical household's income. You can change that to the regional moderate income of $50,842. But median income in Plandome is more than 200k. Average monthly housing costs there are 3575; you need to have an income like that to live there. At least some of the 'wealthier' areas contain people who can afford to live where they are, in the sense that they pay less than the 45% of income on H+T that is deemed affordable.

A regional typical household making $63,553 that gets priced out of NYC won't jump to the expensive mansions in Plandome. They can't afford the home never mind the commute. If one of them works in Manhattan they might look for a suburban apartment near a commuter rail station instead. Those cheaper units won't be the majority in the census tract, so the area will look unaffordable for them on this map. And since those cheaper units are either a small share of the town's housing, new to the town, or both the town's services and amenities are likely to poorly serve the lower income people living in those units who got priced out of their old home. That can show up in a lot of ways like poor to non existent social services, schools with significant fees passed on to parents etc...The challenge of the suburbanization of poverty is more than just the potential for an expensive commute that makes the home with annual costs of 10k in the suburbs more expensive than the old home in the city that cost 15k before the area was gentrified.

The CNT housing costs are taken from the census' ACS. CNT's contribution is their estimate for transportation costs.

ACS housing costs don't necessarily reflect what someone moving to the area can find though. Some areas look affordable on the map because average housing costs are 400 a month. If I wanted to move there I might not find a studio for less than 1500 a month.

As for their transportation cost estimates, clicking around on census blocks near LIRR stations the transit ridership numbers seem pretty low. If you buy a monthly pass and commute to work 21 days a month on commuter rail what do you pay, 25 cents per mile? Maybe it goes up to 30 or 35 cents if you can't walk to the station or get a ride from someone else in your household and you count the cost of a cab or van or the old beat up car (and cheap but hard to get parking permit) you keep around mostly for the ten minute drive to the railroad. That's still probably less than their estimate for driving costs since they use AAA numbers, which I think are based off of new cars kept for five years, and skew pretty high. The CNT H+T FAQ also says they don't take into account the cost of parking or tolls. Typical costs of a car might be 50 cents per mile. If you commute over the Whitestone bridge the toll might double the cost of the trip. Maybe the numbers still work out fine, but the NY area may be a bit of an anomaly and a transportation cost model that works well in the rest of the country may not work well here.