Where is the roads and bridges settlement?

It was a big con game, and many of the biggest con artists believed their own hype. "It can never go down!" they cried. They delivered something valuable to people who couldn't afford it, told them it was even more valuable, took a hefty cut for themselves, and left their victims on the hook for billions. But the government has been slow to make them pay. 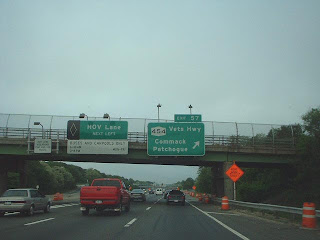 Your tax dollars paid to widen the LIE and pump up housing prices on Long Island.
Photo: Doug Kerr / Flickr
I'm talking about the housing bubble, yes, but not the mortgage fraud. You see, it's hard to tell how much of the bubble came from hype about loans that pay their own interest, and how much came from empty promises of roads and bridges that pay their own maintenance.

There's a little good news on the mortgage front: this year the state has brought in over five billion dollars in settlements with several large banks. But when will we see a similar settlement for the road-and-bridge fraud? When will the government sue the people who got us to pay hundreds of millions for these projects that left us on the hook for decades of maintenance?
Posted by Cap'n Transit at 1:55 AM