The value of Uber and Lyft today

Over the past few weeks in New York we heard a lot of overheated rhetoric about electronic taxi hailing apps like Uber and Lyft, particularly from the former taxi monopolists and their proxies in the de Blasio administration and City Council member Ydanis Rodriguez. 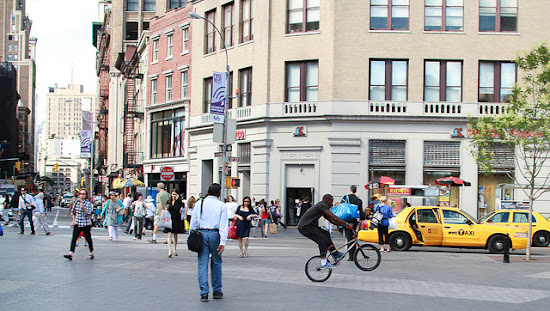 Photo: Ilya Nikhamin / Flickr
Reading their tweets and soundbites actually reminded me of the way I felt reading the end of the Power Broker. I find Uber to be super creepy, and Lyft only somewhat less so. But I hate the medallion system and how it's enriched a select group of millionaires while saddling my city with crappy service. In that respect, Uber and Lyft are a huge improvement.

The first time I used Uber I was way out in eastern Queens and hadn't seen a boro taxi, never mind a medallion cab, in fifteen minutes. I could have looked up the local car services and called around until I found one that had cars available. Instead, I had an Uber in ten minutes. I should have checked the app sooner.

More recently I was standing in Union Square with my elderly mother at 4pm on a weekday. I raised my arm, and a cab pulled over. The driver stuck his head out the window: "I'm only going to midtown." Another taxi: "I'm going downtown."

My mom said, "I really need to get home, Cap'n." I pulled up the Uber app: 1.4x surge pricing. I hit "request" and in five minutes my mom and I were relaxing in the back of a car on the way to Queens, with no grumbling from the driver.

Uber and Lyft can be a lot more convenient for allocating car resources in times and places of scarcity, like eastern Queens or the shift change in Manhattan. They, and other taxi services, are also a lot faster and more convenient than buses or Access-a-Ride. It's a great alternative to owning a car for people who can't climb stairs and don't have a station with an elevator nearby. It's a lot more expensive than a subway or bus, but if you can walk for most trips they're a lot cheaper than owning a car.

Bizarrely, some crazy Queens old-timers have actually accused me of mistreating my mother by relying on taxis to get her to appointments instead of doing the responsible thing and buying a car. It's a very weird way of thinking, but a lot of people buy into it and drive their parents or their kids all over the city in bad traffic.

That's one way that Uber and Lyft provide value on an individual level, but how does it scale? If they replace car or taxi trips that's great, because they don't require as much parking. If they can help people to give up car ownership, even better, because that requires less parking and may convert someone who identifies primarily as a driver into a pedestrian or taxi rider with a different set of priorities.

Shifting to Uber or Lyft or boro taxis may also help reduce carnage. Forget driverless cars: most driving is currently done by amateurs who are frequently distracted, fatigued, enraged or just not very good. Police, prosecutors and judges hold them to a lower standard, and usually identify as drivers themselves.

In contrast, the professionals who drive for Uber and Lyft will hopefully have more training. This is less true outside of New York where drivers are not required to have taxi licenses, but still more likely than complete amateurs. Drivers will also have more accountability, because Uber and Lyft know that bad driving is bad for business.

On the other hand, if we're simply replacing car trips with taxi trips, that does not reduce the average number of passengers per vehicle, and thus its effect on congestion, pollution and energy use are negligible. For those areas, we will need more carpooling.
Posted by Cap'n Transit at 10:46 PM

I find that's the hard part of these services. They are super smarmy but are also upending another system that didn't work for anyone. There's got to be a better way all around.

I like that Uber/Lyft gets rid of the need for all that car storage. Convert some of those lanes of parking into separated bike lanes and wider sidewalks, and it is an improvement.

SANITY! Thanks, cap'n, for so eloquently stating your well-reasoned position on occasionally using a (GASP!) car to get around.