I'm not a traffic engineer, but I know that old habits die hard. I also know that it's possible to create new habits, and once those habits are in place it's hard to get rid of them. Whenever you institute a new traffic pattern, it's an opportunity to teach new good habits, but also to inadvertently teach bad habits. And I know that here in New York we can't trust the NYPD to consistently enforce protections for pedestrians, so habits and barriers are our main lines of defense. 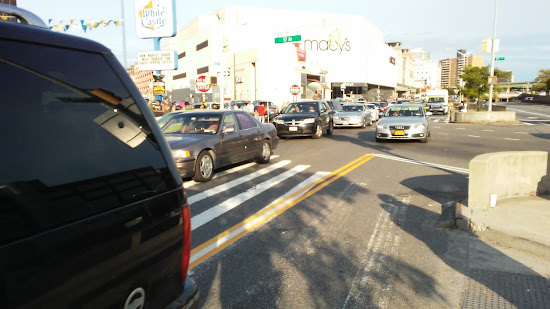 Because I know this, today it was frustrating for me to see the current state of the eastern end of the Queens Boulevard median expansion at 57th Avenue. It looks like the DOT plan involves four colors of paint (white, yellow green and beige), flexible bollards, stop signs and concrete islands. I only saw bollards at the slip lane just west of the Port Washington LIRR viaduct, and a stop sign in front of the Elks Lodge east of 51st Avenue. They have not laid down any beige paint yet, and green paint stops at Broadway. But the white paint continues east almost to the end of the project.

The result I saw today was people driving right over the yellow and white paint, as though it wasn't there and they had two driving lanes the way they've had since the sixties. Private cars, taxis, Access-A-Ride vans, even the Q53 bus drove over the lines. How long have they been doing that? How long will they be allowed to continue? What kind of precedent does that set? 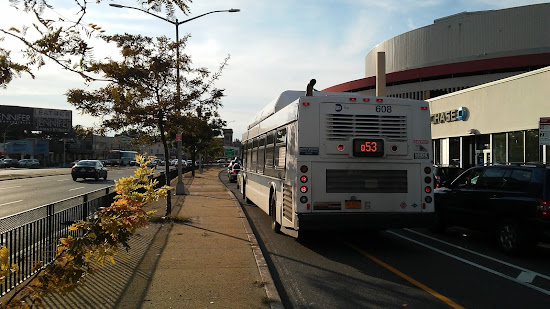 Like I said, I'm not a traffic engineer. Maybe I'm worrying too much about this. Maybe once the green and beige paint get laid down, and the bollards put in, the drivers will all learn to slip into the express lanes, or even to take the train or the bus instead. But it just seems to me that we should have a hard barrier at the place where the median begins, to keep people from driving on it. And this is not an academic concern; the DOT's stats show that 87 people were injured at the 57th Avenue intersection between 2010 and 2015, two of them severely. 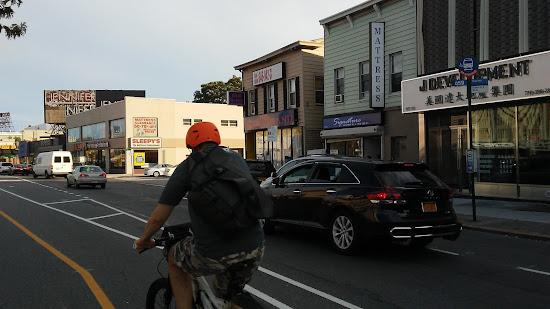 You may know that a 22-year-old cyclist, Asif Rahman, was killed on this stretch of Queens Boulevard in 2008. Since then his mother has fought hard to make the road safer for people who travel it in the future. As I was passing Rahman's ghost bike a cyclist overtook me, using the new lane marked only by white and yellow paint. It felt a bit safer already. We're all hoping the DOT does it right and makes it stay.
Posted by Cap'n Transit at 1:56 AM