How Amtrak can charge so much for the Northeast Corridor

The New York Times tells us that if you focus only on trains and planes, Amtrak's share of the Northeast Corridor travel market is about half. The Washington Post tells us that it's one of the few sectors where Amtrak brings in more in fares than it spends on operating costs. If you've priced travel options in the corridor, you know that this farebox recovery comes from high fares.

In a post on Greater Greater Washington, Malcolm Kenton of the National Association of Railroad Passengers explains why Amtrak needs to charge higher prices, but he doesn't explain how they can. You might have wondered how a publicly owned company can afford, politically, to charge market prices. In other markets, transit operators face pressure from activists and politicians to keep fares low. Why haven't Northeast Corridor politicians raised an outcry about Acela Regional tickets?

Believe it or not, Randal O'Toole has your answer: it comes from other players in the market. Like a stopped clock that's right twice a day, O'Toole comes out with a useful insight once or twice a year, buried in his usual heap of misinformation. In this case, responding to the Times article, he's absolutely correct that the Northeast Corridor intercity market contains buses and private cars in addition to trains and planes. It also contains commuter railroads, which provide slower connections between city pairs like Boston-Providence, Philadelphia-Wilmington and Baltimore-Washington. New Jersey Transit and SEPTA even coordinate to provide cheaper service from New York to Philadelphia. 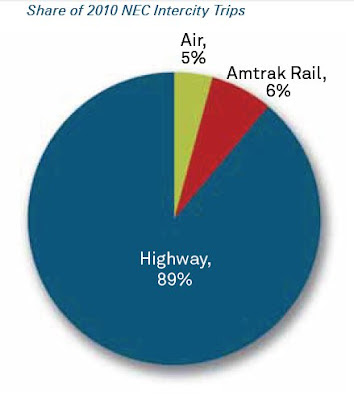 O'Toole dug up this chart that Amtrak themselves compiled (PDF, page 4) from unspecified data. It tells us that Amtrak carried only 6% of trips on the Northeast Corridor, and that airplanes carried 5%. The remainder is 89%, and O'Toole estimates that bus ridership is 8-9%. As far as I can tell he pulled that figure out of his ass, but it's all we've got to go on.

From all the market surveys, we know who's riding the bus in the Northeast Corridor: the poor and students. The buses have captured the low end of the market. Amtrak could have tried to fight them for it, but they could only have gotten prices that low by using their congressional subsidies on the Northeast Corridor instead of other routes. They would have lost money on all those low-end passengers, but not made it up in volume.

The buses, on the other hand, can make a profit at lower prices because most of their infrastructure costs (for roads and many of their terminals) are borne by the government. So they can serve the poorer passengers. Everyone makes a profit, and everyone can afford to travel! Nobody complains to their representatives about high Amtrak fares, because they can take the bus.

That, of course, raises the question: will the new burdensome law restricting low-cost bus lines in New York City drive up bus fares?
Posted by Cap'n Transit at 10:50 PM

There's another reason Amtrak can't lower fares and "make it up in volume"--their peak trains are all sold out and NYC corridor space is at max capacity during peak so they can't run any more trains. They could charge even steeper off-peak differentials than they currently do, but 95 is pretty open off-peak, too.

Aren't they also limited by law in how heavily they can discount off-peak relative to peak?

Of course, if they were allowed to use revenue optimizing fares, that still wouldn't push fares down to the point of being competitive with the roadwork-subsidized off-peak buses.

"Aren't they also limited by law in how heavily they can discount off-peak relative to peak?"

Yep. Differential can be no more than a factor of two; that's what it amounts to.

Capacity limitations explain quite a lot, as Ryan Miller notes. Amtrak's product is so superior -- the elbow room alone, the ability to get up and walk about -- compared with other transit, that the trains fill up.

And the tracks fill up. Papa Lazo wants more trains on the NEC, but if the tunnels into Penn Station had more slots, Jersey Transit wouldn't be worried about how to get more of its trains into the City.

To his credit, Amtrak's Joe Boardman has proposed increasing capacity of the Acelas by 40% simply by adding two more passenger coaches to every one of the 40 existing six-coach trainsets. The figures pencil out that the new cars would pay for themselves, perhaps within six years. But the longer trains will need longer maintenance sheds etc. And of course, nothing can be ordered until after the election, if then.

Boardman's proposed second step is to order more Acela trainsets, and run the Acelas every half hour. That would double capacity of the Acelas.

However, it's not clear on my reading that the new Acelas would be in addition to the Regionals, or merely replace them, with no increased capacity at all. That answer may depend on how fast the proposed Gateway Tunnel brings more tracks into Penn Station.

Note that Amtrak typically runs four trains each hour southbound out of Penn Station: one Acela, one Keystone to Harrisburg, one long distance or state-supported train (like the Crescent or the Carolinian), and one Regional to D.C. or Virginia.

Unless Amtrak gets more tracks and more slots, it can't run more trains. Until then, it can -- and it should -- charge what the market will bear for the limited supply of its superior product.