Don't induce what you can't sustain

Years ago when your Cap'n was just a wee deckhand, he was hired to work on board a ship. This ship had just gotten a contract with a big express shipping company, and needed lots of hands on deck. The pay was good, and there were new guys coming on board left and right, to the point where Jill, the girl whose job it was to go find us had her own berth on the ship. You could tell she cared about us, and she was happy to be finding honest work for people. The fact that she got a handsome finder's fee didn't hurt either.

Now the captain of the ship was so concerned about filling the orders for Big Express that he didn't pay attention to how much he was paying us or Jill. But soon enough it sunk in that with the money Big Express was giving him, he couldn't afford to pay us and Jill and still pay off the mortgage on the ship. One day in June, the Ship's Mate pulled out a parchment with twenty names on it, and Jill came and broke the news to us one by one.

Now, your Cap'n is a resourceful guy and this was right at the start of the Internet shipping boom, and being able to say I had worked with Big Express I was swabbing the decks on another ship for the same pay before the week was out. But when Jill walked me to the gangplank, she was crying. Now I'm a gallant guy, but she wasn't crying for me, she was crying for all of us. She'd been so happy to be bringing us work, and now here she was taking that work away.

Another quick example is pigeon shit. If you keep your eyes open you'll see lots of people putitng out food for pigeons in this city. Listen to them talk a few minutes and you'll hear about how noble their cause is, sustaining life, enabling the handsome birds to survive the harsh winters. And then you go to climb the stairs to the el and slip on pigeon shit. Have you ever seen one of these egotistical fuckers cleaning up after their precious pigeons? Oh no, they're too old and fragile to do anything but scatter breadcrumbs on the sidewalk. Have they made any effort to hire a strapping young fellow to clean up those crumbs after they've been through the pigeons? No. No follow-up, no sustainability. They get the gratification of being the Great Provider, and you get to step in shit.

This is what concerns me about the latest transportation effort from City Council Speaker Christine Quinn, who will be running for mayor next year. Ferries! Everyone loves a boat ride. The plan has been well-received among some environmental groups, including the Metropolitan Waterfront Alliance. But there are some concerns, discussed in this Streetsblog post, that the ferry service could eat up money that would serve more people if it were spent on trains and buses, and then fail.

The Alliance's founder and Director of Programs and Policy is Carter Craft, a sharp guy with a deep understanding of transportation, so I'm not surprised that their recommended guidelines for ferry service implementation echo some of my concerns about half-assed ferry service. In the comments on that Streetblog thread, Carter makes the following point:

Let's not forget that waterfront neighborhoods are almost completely un-served by subways right now; the bridges go way high above and the tunnels dive way,way down below the river beds.

I agree that ferries are the best way to serve the waterfront neighborhoods, but we have to be careful about induced demand. Induced demand is not what ferry advocate Paul Kamen thinks it is, a belief that building transportation is hopeless. It's a factor that requires that transportation be scaleable and sustainable, and here's where we get back to Jill and the pigeon feeders. 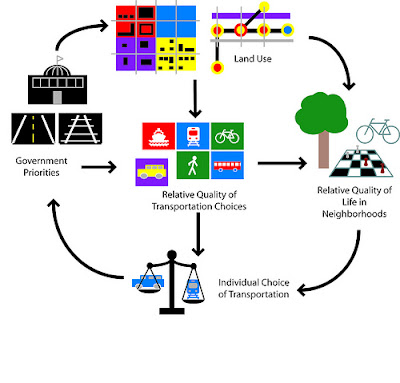 Here's also where I get to use this image of the Land Use-Transportation Cycle created for me by Pantagraph Trolleypole. Now I think I actually left out an arrow, because the relative quality of transportation can influence land use. A prime example of this is Schaefer Landing, a 135-unit luxury condo development on the Williamsburg waterfront. The developer included a one-year Water Taxi pass with every unit, but of course those were useless when the Water Taxi stopped running. All the people who live in Schaefer Landing were left with the long schlep to the subway, or driving.

I think we've demonstrated that even for waterfront neighborhoods, ferry service can't compete with subsidized buses, trains and cars without subsidies of its own. As the Waterfront Alliance rightly points out, any sustainable plan for ferry service has to include indefinite subsidies for that service.

The point of the missing arrow on the Land Use-Transportation Cycle is that subsidizing ferry service doesn't just provide for the existing waterfront residents, it encourages the development of more housing, which means more residents, which means more subsidies down the road. This is part of a larger package of subsidies and regulatory changes that has encouraged waterfront housing development.

If Quinn and Carter and the other ferry proponents want to serve existing residents that's good. But do we really want to encourage more people to be dependent on the subsidized ferry service? Where do we get the most bang for our subsidy buck? If it's trains and not ferries, then we should be encouraging people to move to areas served by trains, and reverse the subsidies and regulatory changes that are guiding them to the waterfront. Otherwise we're hiring deckhands we can't pay, and feeding pigeons with no plans to clean up their shit.
Posted by Cap'n Transit at 12:06 PM

Absolutely! Try this: every time you see a transportation project, ask yourself, "Does this induce more demand? Can it meet this increased demand? Will additional subsidies be needed down the track? How likely is it that these subsidies will be approved? What will happen if these subsidies are not forthcoming?"

The advantage of ferry service is that it's high-capacity. You can always add more ferries, without significant new infrastructure. So if ferry service induces more construction along the waterfront, the city can increase ferry subsidies in proportion to the additional property and income taxes it's going to reap from the residents.

I'd go on and add that constructing housing for the upper class also reduces competition for affordable housing units, which reduces market prices for housing. So the city has to spend less on subsidized housing for the poor.