The Tappan Zee Bridge is over fifty years old, and the New York State Department of Transportation and other agencies have been working on plans to rebuild or replace it. Since the transit connections to Rockland County are inadequate, most of the parties involved have expressed a desire to include a rapid transit (rail or BRT) component.

Last month, NYSDOT announced that it would "split" the Environmental Impact Statement process in two phases. This is a really weird idea, and it's hard for me to keep the whole thing in my head long enough to communicate it to you. Anything that weird should set alarm bells ringing right away.

The initial Environmental Impact Statement (EIS) will evaluate plans for improving the I-287 corridor (including the Tappan Zee Bridge) and assess transit options for the corridor, identifying a mass transit mode for the corridor, its general route and its beginning and end points.

The second EIS product will focus on the details of integrating that mass transit mode into the communities it will serve, including route specifics and transit station locations and designs. A final decision on the first EIS document will kick off work on the second.

So let's see if I have this right:

The "highway and bridge improvements" decided during phase one would be constructed during phase two. The Tri-State Transportation Campaign is understandably worried that at a time when money is getting tighter and tighter, the state could wind up not building the transit component after all. Gee, sorry guys, we really wanted to build your busway. We really tried. We just ran out of money. Better luck next time.

The folks at Tri-State try to put the best face they can on it, but really it's crystal clear that these people couldn't care less about actually getting transit on the ground in Rockland and Westchester. They want to be able to say they tried, they want the green cred, but they have zero interest otherwise. I'm sorry, this does not deserve the green cred. Not yours, Commissioner Glynn. Not yours, Governor Spitzer. Why not? Just take it from President Cannito:

Peter A. Cannito, president of Metro-North Railroad, said, “The goal of this project has always been to expedite renewal or replacement of the river crossing while incorporating a regionally-beneficial public transportation component in the corridor. This new phased approach will help us accomplish that goal.”

It couldn't be clearer. The goal is not to incorporate transit in the corridor while replacing the bridge at the same time, it's to replace the bridge while incorporating transit. It's a subtle distinction, but what it means is this:

The cars and trucks come first, and then maybe the transit ...if there's any money left for you.

Think about all the recent capital projects where the costs have skyrocketed. Somehow things keep getting left out. It's bad enough when window dressing like the Calatrava bird thingy get cut, but when entire subways stations get zeroed out, it's really bad. And when an agency makes a "split" like this, it means that they consider the transit component to be just window dressing.

Don't believe me? Try it the other way.

The initial Environmental Impact Statement (EIS) will evaluate plans for a mass transit mode for the I-287 corridor (including the Tappan Zee Bridge) and assess road improvement options for the corridor.

The second EIS product will focus on the details of integrating those road improvements into the communities they will serve, including route specifics and facility locations and designs. A final decision on the first EIS document will kick off work on the second.

Why shouldn't it be this way around? Maybe the planning of the transit elements is more detailed, but I'm sure there's a lot they have to do for the highway stuff.

At a minimum, to avoid a repeat of the George Washington Bridge disaster, why not put in the phase one EIS that no matter what happens, the bridge will include a dedicated busway in both directions? One that can't be turned into an HOV or HO/T lane without a serious amount of effort?

Another thing: on Page 21 of the scoping document (man, I hate this jargon) you'll find this gem:

The build alternatives 3, 4A, 4B, and 4C include a number of common elements. The fundamental differences between the alternatives are the transit modes. The common elements include the following: [...] A River Crossing with two HOV lanes, eight general purpose lanes, shoulders and a full-length pedestrian/bicycle path linking Rockland and Westchester.

Hm, the current bridge has seven lanes, and all the alternatives would increase it to ten lanes? NYS DOT is not planning to consider the possibility of, say, converting one lane to HOV and adding only one more? Given the wacky recommendations of Steve Anderson and his friends, it's possible that the DOT tried to add even more lanes (twelve! fourteen!) and were beaten back by sustainable transportation advocates, but did they not even try to get it down to eight?

Let's take a look at our goals here: 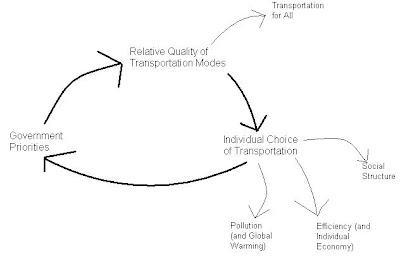 Remember that if you want to have any effect on social structure, efficiency and pollution, you have to change the relative popularity of the various modes. What's the point of adding transit (especially a relatively low-capacity busway) to the corridor, if you add more than enough road capacity to outweigh that transit capacity?

Shouldn't we be going in the other direction? Seriously, if we're planning to add enough commuter rail to take hundreds of cars off the bridge, well then let's remove the facilities for those cars! It's just not enough to minimize the expansion of auto facilities; we have to decrease them. The replacement of the Tappan Zee Bridge is a perfect opportunity to replace car facilities with transit facilities. Spitzer and Glynn deserve no green cred if they don't at least try.
Posted by Cap'n Transit at 2:30 AM

The only problem is, you don't want to rip the auto modes out too fast. Transit takes a little bit more time to replace roadway modes without allowing time for the rezoning and rebuilding of areas around the stations and such. One can't just rebuild the modes and expect life to continue.

That's a very good point; you don't want to shock the system too much. But there's still no reason to increase car capacity. And when money's tight, you have to keep your priorities straight.

Given enough demand, it's very easy to build a lot, and fast. Some areas of Manhattan and Brooklyn, such as TriBeCa, managed a 3% annual growth rate in residential housing in the 1990s. There's plenty of room for housing growth in Upper Manhattan - for example, Harlem is filled with empty lots, buildings that aren't fit for habitation but will be given some repairs, and three-story brownstones that could have floors added to them.

So the idea is to have the people move entirely out of the metropolitan area, into other areas?

Left unsaid is the real estate potential of the I-287 corridor via the existing footprint of all of those parking lots, allowing and accommodating densification for making east west rail more viable.

"So the idea is to have the people move entirely out of the metropolitan area, into other areas?"

No. Where did you get that idea? I don't see it in anything I wrote here.