A tipster pointed me to an email from City Council Member Eric Gioia, who represents western Queens, including Long Island City. Gioia called a rally today to protest the planned closure of the #7 train for the next nine weeks between Queensboro Plaza and Times Square. Residents and businesses in southern Long Island City, which are normally just 10-15 minutes from Midtown, will have no direct subway service, instead being forced to take a shuttle bus to Queensboro Plaza and transfer to the N or Q trains. Gioia proposes several steps to mitigate the closure, similar to what the MTA did a year ago when they replaced switches in Woodside. But here's the most interesting part:

The MTA should have shuttle bus service from Grand Central
Station through the Midtown Tunnel to key #7 train stops in Queens.

It's a big deal to have a political leader talk about tunnel buses. Back in December 2007, there was talk of a Red Hook bus through the Brooklyn Battery Tunnel. Last March, in her testimony to the City Council, Transportation Commissioner Janette Sadik-Khan said that if congestion pricing passed, the MTA would run a new bus route "from Jackson Heights to Penn Station." She didn't give any further details, and congestion pricing was never passed, so there was no bus.

In May I discussed possible Bus Rapid Transit through the tunnel, feeding into the new 34th Street Transitway (PDF). I know that Gioia is suggesting that the tunnel bus go to Grand Central, and only while #7 service is suspended. But if we had buses running through the tunnel all the time, then suspending the #7 train wouldn't be such a big deal. We'd have an alternative that everyone would know about.

It's called redundancy, and it's practiced by smart businesses all over. And in other neighborhoods there is redundancy: in Sunnyside the #7 is complemented by the Q32 and Q60 buses, in Woodside by the Long Island Railroad, and in Jackson Heights by the Queens Boulevard subway. In Hunters Point there used to be fairly decent ferry service, but nowadays it's very infrequent and doesn't come at all in the wintertime.

Running buses through the tunnel is really a no-brainer. Especially with the 34th Street transitway to speed the buses across Manhattan, and on the weekend when congestion is light, you could really get people to Penn Station pretty quickly, not to mention the other subway stops along 34th Street.

I put together the following map (based on maps from Openstreetmap.org) to show possible bus routes to places that Google Maps indicates are ten minutes from Penn Station. 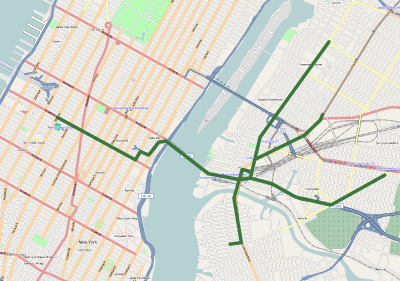 Clockwise from the top, they are: Broadway and 21st Street in Astoria, the 39th Avenue N/W station in Dutch Kills, 46th and Greenpoint in Sunnyside, and Greenpoint and Manhattan Avenues in Greenpoint. Google Maps says that it could take up to 30 minutes with traffic, but again this is on the weekend and along the transitway. Obviously, if the buses make several stops it will slow things down, but I'd venture to say that you could still get from one end to the other in half an hour.

You could have other routes that don't go as far, like a bus up Fifth Street or Center Boulevard in Hunters Point to serve all the new development, and another up Vernon Boulevard to serve the commercial strip - or even a loop serving both.

If you wanted to go farther afield, here are destinations that Google Maps says will take fifteen minutes, or up to 40 minutes with traffic: 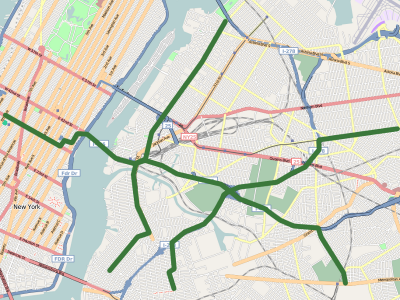 These bus routes would provide robust redundancy during subway outages, add more travel options, and potentially serve areas that don't have very good transit right now. Following Gioia's request, the MTA should at least implement a Hunters Point loop that would connect Vernon and Center boulevards to 34th Street, and another one connecting Greenpoint with Penn Station.

Long term, the MTA should look into implementing some of these as new routes on a daily basis. They may not have the money, in which case I say: look to the Ravitch plan!
Posted by Cap'n Transit at 10:07 PM

Inspect away Congestion! The city should toughen inspections for medical, psychiatric and vehicle reasons to cut down the number of congestion. This way, we will also get the voters against congestion pricing, who live in Bayside and Staten Island, to move away. Free health care means psychiatric care for all those angry talk radio white males!