The Transport Politic (featured on Streetsblog.net) has some good coverage of New York-area issues today, including a Times report that the Federal Railroad Administration has approved the replacement of the Portal Bridge on the Northeast Corridor. 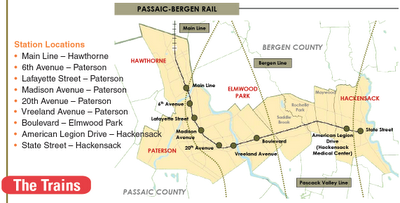 Tonight I'm going to focus on their other post, a list of construction starts that includes passenger service on the New York, Susquehanna and Western main line from Hackensack through Paterson to Hawthorne.

The revived Suzy-Q passenger service is exciting because it would allow residents of this area to travel locally without driving or depending on the bus, and it would be a step in the restoration of passenger service on this important line. I also like how it has five stops in Paterson, serving as a local train much like the Montclair line. According to Wikipedia, it's a drastically scaled-back version of an original proposal to run trains from Hoboken along the former Erie mainline to Paterson and then west to Sparta, but that proposal, sadly, may be too ambitious at this time.

My main criticism of the project is the placement of the stations outside of Paterson. First, you'll notice that there are no stations planned for Maywood, Rochelle Park or Saddle Brook. It's true that in Maywood the line runs through low-density residential areas, and in Saddle Brook through industrial areas, but you'd think that at least one stop would be warranted. In fact, Rochelle Park is a former stop on the Suzy-Q, complete with vintage station, and a closeup on the area shows relatively dense development patterns characteristic of suburban train stations. The Rochelle Park station is also a convenient access point at the southern end of the Saddle River recreational path.

My other criticism regarding station placement is that this section of the Suzy-Q line crosses three north-south train lines, the ex-Erie Main Line, the Bergen County Line and the Pascack Valley Line, but the plan only includes a transfer station on the Main Line. The planned Boulevard stop that is closest to the Bergen Line is a half hour walk from either the Broadway or Plauderville stops on that line, and the planned State Street terminus is about a fifteen minute walk from the Essex Street and Anderson Street stations on the Pascack Valley Line.

It's true that even if the stops on the Suzy-Q were placed right above the north-south lines, it would still be a long walk to transfer. A convenient transfer would require the construction of new stations on both the Bergen and Pascack lines, and the possible closing of one of the existing stations. This may not be worth the trouble, but it's not clear whether the New Jersey Transit planners ever seriously considered the idea.

The New Jersey Association of Railroad Passengers has often criticized NJ Transit for focusing too heavily on commuters to Manhattan and ignoring people commuting to jobs within New Jersey, and non-commuting trips. It could be that since all three north-south lines pass through the Secaucus Transfer station and terminate in Hoboken, the planners thought that a transfer to one of the three lines was enough. This ignores the possibility that passengers may want to travel between, say, Paterson and Oradell or Hackensack and Radburn, or to the new Meadowlands station.

It may be that NJ Transit wants to build new stations on the Bergen and Pascack lines, but doesn't have the money and is deferring that to a later stage in the project. It wouldn't be the first time that a rail project is opened without a critical transfer, and then the transfer is added later. The danger here is that if this project fails to attract a certain number of riders, it may not gain the political support necessary to construct the transfers.

I would like to see NJ Transit build a Central Avenue Transfer Station on the Pascack Valley line, and reopen the Rochelle Park station. These should be part of the initial phase of the project. Later, the agency can look at creating a transfer station at the crossing with the Bergen County Line, as well as extending the line westward to Sparta and beyond. It could also extend the line east to link up with the planned Northern Branch light rail, or southeast to the end of the Hudson (Bergen) Light Rail. It could even be extended east through the abandoned tunnel to Edgewater (seen in the first two photos on this page, as well as this photo on Flickr) and then south past all the car-dependent new housing to the Weehawken ferry.
Posted by Cap'n Transit at 3:44 AM

Wasn't the Hudson Bergen light rail supposed to follow this route, or at least a branch from it? One branch was supposed to go to Tenafly and the other to Paterson. Anyone know what happened to that?

Good question! It's clearly been abandoned as part of the HBLR - at least for the time being - but I don't know what justification was given for the change.

I think part of the idea is that somehow NJ Transit could eventually run dual-mode locomotives through the THE Tunnel right into Penn Station. I do know that the NJ-ARP folks gave the planners the hard time they deserved for prioritizing one-seat rides to Penn so strongly over intra-Jersey mobility, but I'm not sure it had much effect.

I always wondered why they chose to not use the existing stations, many of which are still in existance. Some do have new owners though.