Astute readers will have noticed that I'm interested in free transit, but I'm also interested in profitable transit. Mainly I'm interested in successful transit, and both extremes are promising in different ways. A high farebox recovery ratio indicates a strong demand for the service, and it suggests that whether the operator is public or private, the service will be relatively stable. A well-run free transit system could indicate strong political support for the system, which also suggests that the system will be stable.

With that in mind, let's take another look at those profitable buses that go through the Lincoln Tunnel. You'll find them on the right half of the graph below: 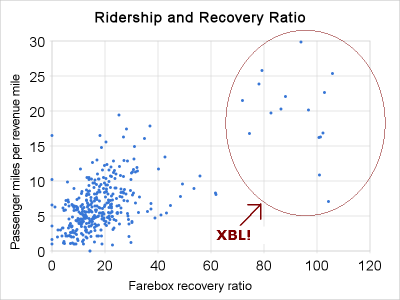 Although most of these services have very high ridership, some are actually low, like Olympia Trails, but make up for it with high fares like the lucrative service to Newark Airport.

Of course this is correlation (0.67, in fact) not causation. To get causation, we have to come up with an explanation that fits the facts better than any other one. So far, this seems to be the best explanation: something about the Lincoln Tunnel created high demand for the buses, which allowed bus operators to run fuller buses and/or charge more per trip, and that leads to profit.

One of the biggest factors is probably the the Exclusive Bus Lane. It gives buses their own queue through the tunnel so that they don't have to wait behind private cars, and that time advantage makes up for the multiple stops they have to make before they get to the XBL. This is, of course, a tremendous indirect subsidy to the bus companies. The State of New Jersey also buys buses for many of the companies, relieving them of this capital cost.

"Fine, Cap'n," you say, "but the Gowanus Expressway and the LIE both have HOV lanes. They're used by express buses that bear a passing resemblance to these New Jersey buses. And those buses in Brooklyn and Queens also got free buses from the government, but they lost money for years until they were finally taken over by the MTA, which continues to operate them at a loss. Why didn't those make a profit?"

Good question! I think there are a few factors. One, as described in this article about the deCamp bus company that serves Montclair, the law creating New Jersey Transit in 1980 contained a clause prohibiting the agency from operating "in destructive competition" with the private bus companies. Several of them have successfully sued NJ Transit on the basis of that law. There can be no public option.

Interestingly, the article also mentions that last year State Senator Beck sponsored a bill that would modify this restriction to add that "Under circumstances where the private entity fails to provide safe, adequate, and reliable public transportation services, it is the responsibility of the State, and instrumentalities thereof, to supplement, compete against, or replace such services."

The second is the Port Authority Bus Terminal. As Alon Levy wrote in the comments last January, "the XBL works only because it feeds directly into a gigantic terminal." Yeah, it's kind of a nasty place, but it's nowhere near as nasty as it was thirty years ago, and it's very good at what it does. It has ramps directly from the Lincoln Tunnel to the terminal, so that many of the buses are in bus-only space from Secaucus all the way to the end. It has an underground entrance to the Eighth Avenue Subway, with a one-block tunnel (that's just as nasty as it was thirty years ago) to the Times Square hub where people can access up to nine subway lines (depending on how you count them), with Grand Central and Penn Station just one stop away. It is very efficient at getting buses out of the tunnel and turned around again, or shuttled off to nearby storage. It's also very good at getting people out of the buses and onto the subways, or vice versa.

I'll get to the most important factor next time. 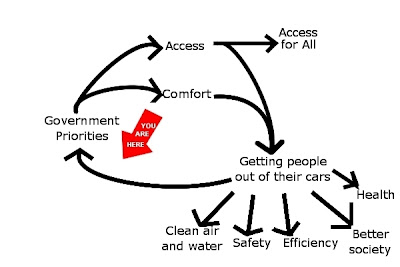 Since I've never been to New York, I'm entirely unfamiliar with the Port Authority Bus Terminal. Why is it good? What makes it work? Is there some place you'd recommend for reading more about it?

Jeff, the bus terminal works because it offers multistory bus parking with a dedicated access route from the Lincoln Tunnel, so that buses don't need to share street space with cars. Elsewhere, buses soon have a parking problem, because ground level depots don't offer enough space.

Excellent question, Jeff! Alon pretty much covers why it works as a transit facility, but it's so much more.

God, how do you describe the Port Authority? It's a humongous place: a city block and a half, with tons of fast-food restaurants and delis, book and clothing stores for commuters to grab on their way to and from the buses, and a post office and a bowling alley. It's nowhere near as skanky as it has been in the past, but it's still, well, y'know, buses. It smells like diesel fuel and air freshener.

The Port Authority is basically the most bohemian airport you'd dream ever dream of, I wouldn't say it sketchy, but still, y'know, buses.