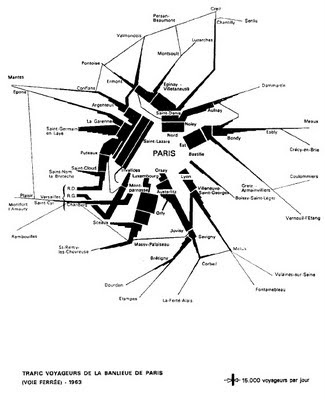 As I wrote in earlier posts, Paris's Regional Express Network (RER) of commuter/rapid trains was not simply designed to make connections, but to accomplish specific development goals. The same 1965 SDAURP (Master Plan for the Urban Development of the Paris Region) that laid out the RER also planned the development of the five "new towns" around the region and the suburban campuses of the University of Paris. Anticipating a new wave of residents who would study and work in the area, regional planners under the direction of Paul Delouvrier, the General Delegate to the District of the Paris Region, designed these train lines to connect residential developments with universities and job centers. They also aimed to relieve congestion on certain metro lines that were overloaded, particularly the 1 and 4 lines, the main east-west and north-south lines in the system.

Any similar system in New York should take into account similar planning goals. One of the reasons that the New York area is so fragmented is that we don't have a single Delegate, or a single regional planning agency. Instead we have three Metropolitan Planning Organizations (MPOs): the New York Metropolitan Transportation Council Council (NYMTC), the North Jersey Transportation Planning Association (NJTPA), and the Southwestern (Connecticut) Regional Planning Authority (SWRPA). Each of the three have come up with plans similar to the SDAURP, some better than others. We can piece them together to get an idea of the priorities that our planners have.

Of course, these plans should be viewed with some skepticism. Although the planners are supposed to act in the best interests of everyone in the region, they have been known to occasionally fail in that task. Also, different people have different priorities, and you will probably not have the same priorities as these planners. With that in mind, I will probably revisit these plans and question them - and I encourage you to do the same on your own blogs or in the comments. In the meantime, though, let's operate on the assumption that the planners share our priorities, are working in the best interests of everyone in the region, and are knowledgeable and competent.

The NYMTC has actually just released their draft plan for 2010-2035. The NJTPA has their draft Long Range Plan for 2035 available, but in some ways the New Jersey State Plan is more valuable. The SWRPA released their plan in 2006, and it can be downloaded as a PDF from the Town of Weston's website.

I'll talk more about these plans in future posts, and their implications for future transit improvements, but feel free to have at them in the comments.
Posted by Cap'n Transit at 11:43 PM

I looked quickly, and it's hard to square these weak-sauce plans with the thought of serving nine million New Yorkers. In Manhattan, the desired business growth areas are Lower Manhattan and the "Hudson Yards" area; neither one of those areas have direct connections to Metro-North, NJ Transit, or LIRR. How many executives are willing to relocate further from the train?

Lower Manhattan and Hudson Yards will have to accommodate the 1 million extra New Yorkers that are expected to live here by 2035. Because all other areas of the city are anti-growth.

I wouldn't say that all other areas are anti-growth, but a lot of them are. Still, I agree that Jonathan has a point. More in my next post.

The reason they specified Lower Manhattan and Hudson Yards is that those are the areas where there's land to be used for monolith skyscrapers. Those areas are at least serviceable by transit; Brentwood and Brewster, the two outermost growth areas, are not.

Only in a few areas should there be large changes, such as Atlantic Yards (without knocking down city blocks), Sunnyside Yards, the 125th Street corridor, Secaucus Junction, and maybe St. George.

Lower Manhattan is actually fairly easily accessible from NJ Transit. Taking a train to Newark and switching to the PATH there is painless - it's designed so that the PATH is across the platform from the NEC.

In fact, getting to WTC is faster in many cases than a lot of Midtown.