As I wrote a few weeks ago, the transition movement has intrigued me since I discovered it, but I have some concerns. I'll try to lay them out here.

When I first heard about transition towns, I was thinking, "oh, it'll be interesting to see how much they've reduced their towns' carbon footprints!" And ... nothing. Despite hundreds of towns that have signed on, it turns out that they haven't actually reduced the amount of fossil fuels used by any of them. In fact, I'm not sure that they've even measured the amount of fuel used by any of these towns to have as a baseline.

What have they done? Well, they've come up with a lot of plans about what they will do. Significantly, none of the plans seem to involve them "climbing down" now; they're all waiting for the crisis to hit before they do anything.

Given that the transition townspeople haven't actually accomplished any reduction in oil usage or pollution, you would think they'd be kind of humble about their accomplishments. But no, they go around giving weekend seminars about how to set up a transition movement in your town. For about $300 (including meals but not lodging), you too can find out how to make a plan that has not been shown to work at all.

I'm not suggesting that the whole thing is a scam, or that the leaders of the movement have intended anything like this. I'm not even saying that the people who are leading the workshops believe that they're scamming anyone. But I do think that some people are making a bit too much money on something that hasn't actually been shown to help anyone. Kind of like reiki or chakra balancing.

The other big thing that bothers me is the emphasis on small towns and on food cultivation, and the relative lack of discussion of public or human-powered transportation. Now I know that everyone comes to the green movement with their own motivation. I personally would like trains and buses, bikes and walking, whether or not they were good for the environment, and it's kind of fun to be able to wag my finger at people and say, "You've got to build this subway ... to save the planet!" One of the beautiful things about the environmental movement is seeing the solar power people and the local food people and the clean river people all coming together and knowing that their areas of personal concern are part of a bigger need.

One problem with a lot of the green movement is that there's no sense of perspective, no understanding that all the basement hydroponics in the world won't help us if we're still driving Caitlin five miles each way to soccer practice. You also get a lot of arrogant "experts" who get bona fide green credentials for stopping an open-pit coal mine and think that that entitles them to declare that the only transportation fix we need is fuel cells.

The result is that if too many vegan activists show up to a meeting you get a plan full of intricate details about sustainable mushroom farms with a half page about transportation. And for that half page about transportation, do they say, "oh, let's go talk to Dave the transit geek, he'll know the best way to handle this"? No, they summarize some puff piece they read six years ago in the Utne Reader about french-fry biodiesel.

Finally, there is the stunning naivete about the forces that influence population distribution that has been all too typical of the lefty movements of the past century. We have cities, towns and rural areas for a reason. Forks, Washington is not the ideal base for your movement because it's a fucking rainforest, and rainforests can't sustain a population of any size. Same thing with your beloved ranch in New Mexico. If you try to get lots of cityfolk to move there you'll deplete the place so fast it isn't funny.

Sure, there are tons of cities out there that are unsustainable. Phoenix and Atlanta in particular come to mind. But there are other cities that have high populations because they're conveniently located along trade routes, and they're good places for people to live. As long as there are people on the planet who have the resources to settle down, these places will be relatively densely populated. A lot of these people will even make their livings off of trade instead of by working with their hands, and there's not a damn thing you'll ever be able to do about it.

I've got plenty more to say about the land-use aspects of this, but I think I'll save it for another post. Let me end this one by recalling that I said at the beginning that I find a lot of promising things in the transition movement. These concerns I'm airing don't change any of that. I don't want to destroy that movement, just to make the best of it. 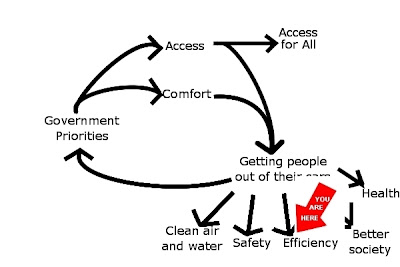 I went to a Transition Towns talk, and came away curious about whether anything was going to come of it, but ultimately unimpressed. From what I remember, it was wishy washy and seemed more about feeling good than about serious change. Their heart's in the right place, I'll give them that.

Atlanta isn't inherently unsustainable. In terms of climate, it's a warmer version of Washington or Philadelphia. The problems are that it's built around sprawl, and that it's never bothered building the water works that characterize older Northern cities.

... but there is nothing intrinsically unsustainable about setting up a city where Atlanta is located.

Yes, let me clarify that as far as I know the Atlanta area can sustain a population of that size; it's just the form that's unsustainable. Feel free to substitute Houston or Miami; I'm not sure why I picked Atlanta.

CommuterNation said...
This comment has been removed by a blog administrator.
October 7, 2009 at 2:08 PM

Sorry, Commuternation, too close to spam.

This is kind of the same reaction I have after reading so much of the knee-jerk criticism of the new David Owen book that touts Manhattan as the ideal for a green future.

Sure, New York will see some serious problems in an energy starved future -- how do you power the skyscrapers? where do we get our food when so much of the city and its surroundings are developed and paved over? But there's a tendency to throw the baby out with the bathwater with so many these criticisms that continue to ignore the virtues of urban density. It all seems like a "CLAP LOUDER!" defense mechanism needed to rationalize the future of suburbia.

Like it or not, were going to need to live in smaller, denser living arrangements. Despite its problems, New York has a pre-industrial history, and is uniquely positioned to handle many of these issues.