The next City Council transportation chair

The News reports (thanks, Streetsblog!) that the New York City Council will be voting on its leadership positions by the end of January. For the past eight years, the Transportation Committee has been chaired by John Liu of Flushing, who has now been elected as City Comptroller. This is a critical moment for advocates of transit and sustainable transportation, and it's important for us to make our priorities known.

Liu has had a mixed record on these issues. He has supported congestion pricing and the bikes in buildings bill, but in a pretty lukewarm way. More importantly, he has an annoying way of treating transit riders like we didn't exist. Many times when the subject of bridge tolls came up, he acted as though everyone drove everywhere. 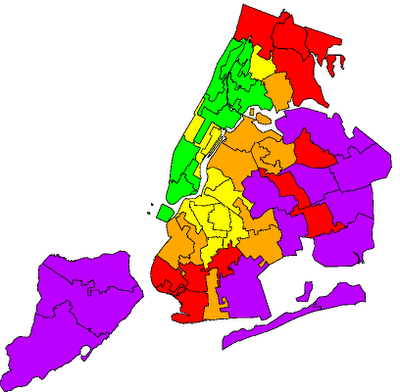 I got the feeling that some of this was political calculation. Liu represented a red district, where only 38% of households were car-free in 2000 (PDF). Sometimes when the subject of bridge tolls came up, his reaction seemed mostly to be frustration that the Mayor and the Governor were pushing something that he felt was politically impossible for him to get behind. In fact, I would say that he adopted pro-transit, pro-livable streets positions about 38% of the time.

The News says that the top contender to chair the Transportation Committee is James Vacca of the Bronx. Vacca comes from the reddest district in the Bronx (PDF), with only 39% of households car-free. He represents the most sprawling, suburban part of the borough: Throgs Neck, City Island, Morris Park, Pelham Bay and Pelham Parkway. He sees transportation mostly through a car windshield. He voted for congestion pricing, but he was also a major sponsor of the idiotic, pandering five-minute grace period bill. He has protested the proposed elimination of the Bx14 bus, but his counter-proposal would do nothing to solve the problem long-term, and did not place the blame where it belonged: on the state legislature.

According to Streetsblog, there is an alternative to Vacca: Dan Garodnick of the Upper East Side has expressed interest in the chairmanship. He represents a yellow district: 70% of households are car-free (PDF). Garodnick is not perfect: he signed David Yassky's moronic letter that claimed it was "blatantly unfair" for people from Brooklyn or the Bronx to pay as much as people from New Jersey to get into Manhattan.

Garodnick has a lot to recommend him, though. He was one of only two Councilmembers who refused to vote for the parking grace period. He recently helped corral a number of his fellow Councilmembers into coming out in support of physically separated bus and bike lanes on First and Second Avenue, which is a big deal. He gets good marks from Glenn McAnanama of the organization Upper Green Side, which is a very good testimonial. Unlike Vacca, he has actually served on the Transportation Committee. He is probably the most progressive member of the Council on transportation issues, and would be the ideal candidate.

Streetsblog commenter "Niccolo Machiavelli" speculated that Quinn may want to give the committee chairmanship to someone from the Bronx, to secure their loyalty. If so, Vacca is really one of the worst possibilities. The Bronx councilmember who's most progressive on transportation is probably Joel Rivera, but he'll probably be re-elected Majority Leader, which is more senior than Transportation. Oliver Koppell voted for congestion pricing and sponsored the bikes in garages bill, and has been a member of the Committee, so he would probably be better than Vacca. Please let me know if you're aware of any indications to the contrary.

Larry Seabrook voted for congestion pricing, is a member of the Committee and has come out in favor of legislation to crack down on unlicensed drivers.

Maria del Carmen Arroyo and Annabel Palma voted for congestion pricing, but otherwise they seem to have no interest in transportation at all. Helen Foster famously skipped the congestion pricing vote. The useless Maria Baez has been replaced by unknown quantity Fernando Cabrera, who until 2008 was a registered Republican living in the suburb of Pelham (a fifteen-minute walk from the train station), and like most Bronx Latino politicians campaigned using a truck with loudspeakers.

The next Transportation Chair should be Dan Garodnick. If it has to be someone from the Bronx, and can't be Rivera, then it should be Koppell or Seabrook. The next choices would be Arroyo and Palma, in roughly descending order by car ownership in their districts. Vacca would actually be my fifth choice.

This decision will affect how transportation policy is framed in the city for the next four to eight years, possibly longer. It's too important to be left to power politics and back-room deals. I encourage you to contact your councilmember and Speaker Quinn. Tell them that the next Transportation Committee Chair should be Garodnick, Koppell or Seabrook.

Update: Frank Lombardi of the News is now reporting that "the powers that be are pushing" for Vacca to be Transportation Chair. Time to do some pushing back, if you want to see a committee chair who supports transit and livable streets.
Posted by Cap'n Transit at 11:12 PM

There's nothing wrong with preferring a pro-congestion pricing Bronx rep over an Upper East Sider who was looking for excuses to protect his constituents' driving habit.

Oh, Alon, come on. Protecting his constituents' driving habit by getting two lanes each on First and Second Avenues converted to buses and bikes?

But I would be happy with a pro-congestion pricing Bronx rep. I'd just rather it be Koppell, since Rivera is not available.

First and Second aren't where his constituents drive. The avenues further west are. Incomes east of Third are about one half what they are between Third and Central Park.

A person who thinks CP should not affect his constituents isn't pro-transit - especially when those constituents live right on top of the 6. He deserves credit for his support of bus and bike lanes, but he also deserves criticism for his Brodsky-like shilling for rich people's right to drive for free.

Garodnick's "I don't want people in my district to pay to drive" comment wasn't very auspicious. It doesn't matter to me too much how he voted, because he could have been pressured either way. His statements make it likely that as transportation commissioner he'd not push too hard for making drivers pay.