Gay marriage advocates have something to cheer about, but transit advocates are facing unpleasant prospects in Senate District 12. George Onorato, who recently voted against the same-sex marriage bill, announced that he will not seek re-election to the Senate seat he has held for 27 years. Assemblyman Michael Gianaris from Astoria, who publicly criticized Onorato for his position on marriage equality, announced that he would run for the seat.

Transit advocates in District 12 have long been frustrated with Onorato's lack of interest in the system that helps most of his constituents get around every day. Despite the fact (PDF) that 56.8% of households in District 12 are car-free, and only 3.7% of commuters drove to Manhattan for work, Onorato was initially undecided on congestion pricing and then made more and more negative statements. Streetsblog today described him as a "road pricing skeptic." 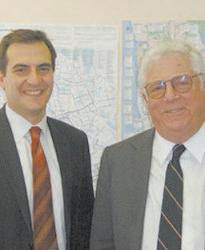 Gianaris meets with Richard Ravitch in February 2009 to try to find a way to pay for the MTA "without imposing new bridge tolls." Apparently, they failed. Photo: Queens Gazette.

However, that skepticism pales by comparison with Gianaris's outright hostility to road pricing. Streetsblog's characterization of Onorato was based on a quote pulled from a Queens Gazette article about a January 2008 town hall meeting to discuss congestion pricing. But the town hall meeting was sponsored by the publisher of the Gazette and Gianaris, who both spoke forcefully against it. Here are Gianaris's statements as quoted in the article:

I oppose it. A big concern is people will park in Astoria and Long Island City and hop on a train [to Manhattan]. I would hate to displace the [traffic congestion] problems of Midtown Manhattan to us.

It's really a way to tax people who don't live in Manhattan. It's not only who's paying but who's not paying-the wealthiest of the wealthy. I am not going to support a plan to make Manhattan a rich person's paradise.

There are people who do not have easy access to mass transit. It's a long way to go before this (congestion pricing) becomes a reality. I am going to fight this.

In December 2008, when Gianaris and his colleagues in the Assembly had succeeded in defeating congestion pricing, he had this to say about Richard Ravitch's follow-up plan to use bridge toll revenue to pay for the MTA:

Any solution that disproportionately burdens middle- and working-class people who live in the Bronx, Queens and Brooklyn is not a fair way to deal with this, and that’s what tolling the bridges would do.

In February of 2009, when Assembly Speaker Sheldon Silver proposed a compromise bridge toll plan, here's what Gianaris had to say:

Honestly, I'm still evaluating it. This idea is certainly better than the Ravitch plan, but I remain very apprehensive about any tolls on the East River crossings.

Keep in mind that Gianaris's Assembly district 36 (PDF) is only slightly more car-oriented than Senate District 12: 51.4% of households car-free, and 4.4% of commuters to the Central Business District traveling by car alone. But while Onorato waffled, Gianaris was in full-throated opposition, with the kind of dramatic rhetoric we mostly heard from legislators representing much more car-dependent districts, like Richard Brodsky or David Weprin.

By last May, Gianaris and Onorato had won: Governor Paterson conceded that he would have to accept the plan devised by Senators Kruger, Espada, Monserrate and Diaz. At the time, it was widely acknowledged by everyone outside of the legislature that this plan would just postpone the crisis. Streetsblog noted that all three dailies panned it. The Times: "Albany’s latest M.T.A. plan fails to provide enough steady revenue for the authority’s capital needs." The News: "there will be scant money to maintain the system, starting riders on a trip back into the nightmare of broken-down trains and filthy stations." The Post: "their plan makes scant provision for the future. Indeed, it follows precisely the logic that led to the system's demise in the '70s: Put off needed funding today, and worry about it tomorrow. Only "tomorrow" never comes." As far as I remember, the MTA was silent, preferring to let the politicians decide.

Well, now the crisis predicted by the editorial boards has come to pass, maybe a little sooner than expected. The MTA, facing a $600 million deficit and a fare hike already scheduled for 2011, has proposed a set of service cuts. In response, craven lawmakers from around the city have been holding bogus rallies where they criticize the MTA as though their own actions had nothing to do with the current situation.

The rally held in Astoria last week by Gianaris and City Councilmember Peter Vallone Jr. seemed by most accounts to be typical of these things. But the Gazette had the most damning quote from Gianaris (emphasis mine):

The MTA is looking to scare us. The city makes us pay more taxes each year to keep trains like the W line running. And now, despite heavy taxes, the MTA has lied to us and they are threatening to cut our services.

Whatever taxes "the city" is making us pay, its contribution to the MTA has been going down for the past sixteen years, so it's not going to the W train. I'm sure the MTA has lied about something, and they're clearly looking to scare people and threatening to cut services. But Gianaris surely knows that the State contribution has been going down - he voted for the 2008 budget that cut $50 million - and probably the same for the city.

The MTA is simply not responsible for the service cuts that Gianaris is protesting, the State Legislature is - including himself and Onorato. There are two possibilities. Either Gianaris has knowingly forced the MTA to cut service and is lying about it, or he just blindly protested bridge tolls and voted to cut state funding, and was too stupid to figure out that there was no way for the MTA to pay for its operations without them. One way or another, he's not someone I want representing me in the State Senate.

Before Onorato retired, there were rumors that Gianaris would run for Attorney General and leave it to a junior political figure to challenge Onorato in the primary. Now that Gianaris has said he will be running for Senate, there's the question of who will run for his seat in the Assembly. One of the favorites to challenge Onorato was lawyer and activist Jeremiah Frei-Pearson, and we can imagine that Frei-Pearson will at least consider running for Assembly. I wish I could say that Frei-Pearson would be an improvement over Gianaris in the Assembly, but he showed up at the same rally where Gianaris said "the MTA has lied."

Frei-Pearson's statement at that rally just addressed the impact of the proposed service cuts, not the question of blame or solutions, so it's possible that he just doesn't know the extent to which Gianaris is responsible for the current situation. Let's hope that he's better than Gianaris, figures out what's going on soon and shows true progressive spirit. Otherwise, the chances for Astoria's transit riders look pretty slim.

Addendum: Streetsblog today linked to an article in City Hall News about possible contenders for Gianaris's seat. Unfortunately for those of us who care about a candidate's position on the issues, this article comes from an exclusively horse-race perspective. All we learn is who's got what connections, and that one Republican thinks the 36th is "definitely a conservative-leaning district." Thanks, Chris Bragg!
Posted by Cap'n Transit at 11:37 PM

You see, I'm what an economist would call a marginal road user (in the San Francisco area). Sometimes I will drive into the city, sometimes I won't. Whether or not I drive depends on two factors: Parking prices and traffic. This typically means that if it is rush hour or a weekend, I'm taking BART into the city. If it is a weekday, non-rush hour, I'm gonna drive.

From my own little informal surveys (Asking random people), there are thousands of people just like me in the SF area. But I also know for a fact that there are tons of people that are not like me...they are gonna drive no matter what. I know quite a few of these people. Their typical response is that they would be willing to pay extra tolls if they didn't have to put up with the horrible traffic.

Those are the people that can make someone like Gianaris shut up. You will probably never have the support of 100% of the drivers, or even a majority. But a vocal 20% is huge, and it is the kind of seemingly paradoxical support that changes people's opinions.