Public and private on the Goethals Bridge 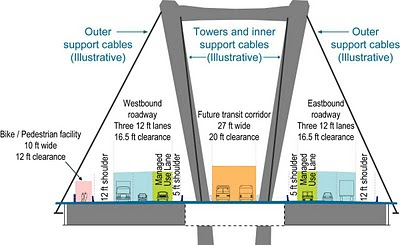 Or will it? Today, the Tri-State Transportation Campaign tweeted a link to an article in the Staten Island Advance that tells us that the Port Authority has issued a request for proposals (PDF) for a public-private partnership to reconstruct the bridge.

This $1 billion project is also going to add a "managed use" lane to the bridge in each direction, either a high-occupancy vehicle or bus-only lane. This would bring the total number of lanes from four to six, adding capacity for 1600 more vehicles per hour to cross onto Staten Island in each direction. Believe it or not, this is actually a huge victory by Tri-State and Staten Island groups over the previous proposals that called for eight or more unrestricted lanes. There are also plans to reserve space for a "future transit corridor" that could carry light rail or buses (probably not subways or commuter rail, with that kind of grade). Finally, the current hair-raising three-foot-wide bicycle/pedestrian path that is never open would be replaced with a ten-foot path separated from speeding traffic by a generous shoulder.

Apparently the Port Authority, no longer a cash cow, has spent too much money on the World Trade Center and the ARC Tunnel and doesn't have any to lay out for the bridge. They want a private investor to design and build the bridge, and then maintain it for the next thirty to forty years. The company would lend a bunch of money to the Port Authority, which the authority would presumably invest somewhere, and then pay back to the company in periodic installments to cover the cost of design and construction. It would also pay installments for maintenance over the 30-40 year term of the agreement.

The request is confusing, because it refers to a "Construction Lump Sum" and a "Maintenance Lump Sum," and I thought that a lump sum was the opposite of installments, but maybe it refers to the fact that the amounts are agreed on beforehand. In any case, let's run this through Melissa Thomasson's ideas about the benefits of the public and private sectors:

Markets are usually really good at controlling costs. When they work best, products come into existence, like cell phones or stockings. They start expensive, and then they get cheaper and better. But markets don't guarantee that everyone can afford the things they need. Government can be good at that, ensuring universal access. But when you're paying for everybody, it's hard to control costs.

In this case, there will be no market beyond the initial bidding process, so don't expect too much cost containment. There will also not be the advantage of flexibility that come with entrepreneurship, because the entire process will be subject to an agreement negotiated between the winning bidder and the Port Authority.

The main thing that the Port Authority would get from the deal is that it wouldn't have to issue bonds to pay the upfront costs. It would also shift the risk of cost overruns and unexpected maintenance expenses onto the company. In exchange, the company would get interest on the loan, which the authority would presumably pay for out of tolls.

What Brown doesn't mention is that shifting the risk is not always successful. If the investors feel that they're not making enough money on the deal, they can default, leaving the Port Authority responsible for cleaning up whatever mess they make.

Essentially, this is like a teenage boy who wants to buy a car but can't get a loan on his own credit. He asks his parents to cosign the loan. Instead of an obligation to visit them when he might not otherwise feel like it, the Port Authority is just paying extra interest.

Now about this extra interest. The Advance says, "Borough President James Molinaro said an investor could stand to make a decent profit on the arrangement, which he said he would support." Well, that's nice, but it means that more than a billion dollars of toll revenue will be spent on this, money that might otherwise be available to subsidize PATH trains or the bus terminals.

What would happen if the Port Authority couldn't find a bidder? According to the Advance, "If no one comes forward to fund the project, the Port Authority will maintain the existing bridge, and Islanders will be stuck with its deteriorating roadway, dangerously narrow lanes and heavy traffic for the foreseeable future, until the economy rebounds or an alternate funding source is found."

The existing Goethals bridge is a pretty scary and dysfunctional thing, and the proposed new one would be safer for all and friendlier to pedestrians and cyclists, and have the promise of a new transit corridor some day. However, it would add up to 1600 more vehicles per hour to the roads of Staten Island and Brooklyn. And it would take a billion dollars out of the Port Authority budget, and it still runs the risk of a bankrupt partner dumping a financial mess in the authority's lap.

This bridge replacement should probably be done at some point. It's not quite as horrible as the Tappan Zee bait-and-switch, or the Kosciuszko that has no transit component. But this is not the time. The Port Authority should wait until it can raise the funds through public means, either by its own bonds or with federal money. It has already spread itself too thin, and we can ill afford to see it collapse and take our PATH trains and bus terminals with it.
Posted by Cap'n Transit at 7:16 PM

I thought the money is always borrowed for such projects. Nobody ever has billions up front to build anything. The problem is not a lack of cash, but a lack of credit.

What the PA is basically saying, PA credit is so bad that neither the government nor investors who buy public bonds would trust to give the PA more money. So the PA is going to hand over the collateral even before a potential default - the bridge is privately owned and reverts back to the owner if the lease with the PA is terminated for whatever reason.

Basically, unlike the MTA, the PA is acting like a responsible adult by saying "we can't borrow anymore". I could only wish that the MTA would be allowed to (and have the will) to do that.

I don't think it's acting like a responsible adult and saying "we can't borrow anymore," Citylights. The Port Authority is asking to borrow money - a billion dollars.

It's acting more like an irresponsible adult who maxes out their credit cards and then carries a balance on a high-interest payday loan.

The Port Authority is upset that they have to pay a higher coupon. I read the RFI and I would not get involved unless I had 40 years to recover the money after the bridge is built.

The only people that are lending money for these types of projects from the private sector are pension funds ad insurance companies and they need an 8-12% coupon.