Skimming the cream off the poached siphons 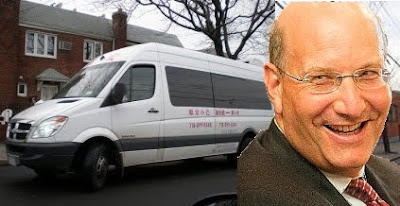 Some anti-van activists, like Roe Daraio and the Queens Crapper argue that private jitneys "have long poached fares" from the MTA and thus cutting into their revenue.

the express buses are not only losing money as a whole, but also on a route-by-route basis. Hence, rather than harming the express service, or "skimming the cream" off its routes, the private vans are actually helping to reduce the city's transit deficit.

I wish I could just leave it at that. No poaching, no skimming. Jay Walder said so! Sadly, his argument doesn't apply here. In his study, the vans could save the MTA money because the MTA would eliminate unprofitable routes and leave the field to the jitneys.

In practice, the MTA has continued to run all the unprofitable lines that Walder identified twenty years ago. The amount they have spent to run these buses every year has increased (from $13 million to $20 million), and they have added more routes (for a total cost of $38 million).

I found it interesting that Walder was so surprised to find the Staten Island express buses losing money. Today it is almost an article of faith among transit advocates that no route earns enough at the farebox to cover its operating expenses, let alone capital costs. This is actually not true across the board: there are routes within the MTA, and entire independent companies, that make an operating profit. Some even make an overall profit. But the vast majority of bus agencies are heavily subsidized, a fact that many advocates use to counter accusations that a particular route or agency is "losing money."

In 1985, though, Walder wrote, "Contrary to general perception, NYCTA express buses are operating at a loss, with a deficit estimated at $4.7 million per year, or 85 cents per passenger." Clearly, not only were the NYC Transit express buses expected to earn enough profit to cross-subsidize the local service, but everyone else thought that that was actually happening.

The fact that these losses weren't openly acknowledged or widely discussed when found, well, I don't know what to think. But leaving the field to the private jitneys was only feasible if Walder's other recommendations were followed. That probably has something to do with it.
Posted by Cap'n Transit at 9:28 PM

Its operating surplus - there's no such thing as "operating profit". Lots of going concerns make profits because someone else pays for some of their capital expanses - long haul truck freight, example. But a profit (or loss) is a financial position of an organization.