Azumah gets to the core 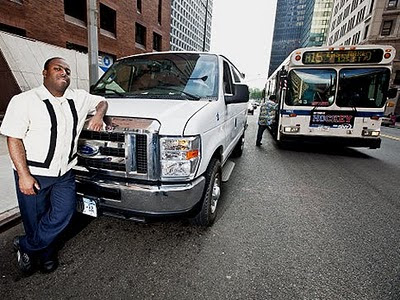 Photo: Taggart for the Daily News
Last night the Wall Street Journal and the Daily News reported that Joel Azumah, an occasional commenter and subject of discussion on this blog, would begin running buses on the X25 and X90 routes abandoned by the MTA. Today, the Village Voice and WCBS said that the service was up and running with "10 bootleg buses and two vans." Somehow he turned into an Italian guy named Joe Lazuma, at least according to WCBS reporter Mike Sierra Nax.

Joel was a bit disappointed with ridership today, telling the Voice, "Suffice it to say, the numbers were a lot lower than I expected." However, he's already expanded his services to include the X29 route to Coney Island and the QM22 to Jackson Heights. And these are no jitneys: he is running a schedule that is very close to the old MTA schedule.

So how is Azumah getting around the city's anti-competitive laws that essentially make it impossible for anyone to start a bus service without being Hasidic, and extremely difficult for Hasids? How does he pick up passengers from the street without having to "go through the process the right way and explain their routes, business plan, information on their bus fleet," as a city official told the Journal?

Joel has a cute solution: he's not picking up just anyone, only members of the "Apple Core Transportation Club." How do you become a member of this elite cadre? You print out a PDF like this one from his website. Apparently there's a similar system for people who don't have internet access.

DOT staff have made noises to the media that indicate they may try to go after Joel. I hope that Goldsmith and Sadik-Khan rein them in and let Joel go ahead. What kind of government fails to provide an essential service, and then prevents anyone else from doing it?

In terms of ridership, I hope that Joel is prepared for a rocky start. He has tried to provide service before, on Staten Island and in New Haven, and wound up having to pull out. A new business, even if it's a field you've been in for years, often loses money for the first six months or more. It's by sticking in there and showing people that you're dependable that you gain their trust and loyalty. If he can keep running the buses for months, I think ridership will gradually grow. Oh, and a little on-board wifi probably wouldn't hurt.
Posted by Cap'n Transit at 11:44 PM

According to your NYCT Service spreadsheet, the X29 had a 52% farebox recovery ratio. It would be nice to see some numbers as to how Azumah plans to make this route profitable. Can we extract approximate numbers for his maintenance and wage costs? We know that his new fare is $6. If he makes this route profitable while providing a quality service and fair driver wages, this is not only a damning statement about the MTA and state government, but also a clear indication that privatizing operations is the way to go.

I think he and his friends and family might be driving the buses, so (if that is, indeed the case), he is saving a lot on the cost of labor.
According to the MTA's numbers, the X29 costs $8.13 per passenger to operate, while the QM22 costs $13.28 per passenger to operate. However, he is definitely saving on labor, so the only costs are tolls and maintainance on the vehicles.

I didn't have enough space, so I'd like to add that he probably wouldn't do too well on the X25/X90 routes. Part of it is because of the demographics of his customers (Would an Upper East Sider or an upstate commuter really trust or want to be seen coming out of a fly-by-night company's vehicle?)
The second reason is that the X25 doesn't get many passengers (If it gets 20 riders per day, that is 10 riders per direction, or 2-3 riders per bus.) Even if it went to 6 riders, that is only $18, barely worth the trouble even if he is saving on labor.
The X90 would be competing with the taxi stand at 71st Street/York Avenue, which offer on-demand service and the glamour that he doesn't offer.

"I think he and his friends and family might be driving the buses, so (if that is, indeed the case), he is saving a lot on the cost of labor."

This is incorrect. I am using five 45 foot motorcoaches on the route chartered from a high-quality bus company.


"(Would an Upper East Sider or an upstate commuter really trust or want to be seen coming out of a fly-by-night company's vehicle?)"

You mean the fly-by-night vehicles that are higher in quality than the MTA vehicles on the route? Upper East Siders are generally sophisticated enough to know politics when they see it.


"The X90 would be competing with the taxi stand at 71st Street/York Avenue, which offer on-demand service and the glamour that he doesn't offer."

I was only questioning how some of the routes would be profitable. I just can't see how anybody can bring down the X25's $42 per passenger cost down to a profitable level. I figured that, since the operating cost is the driver's wage, that would have to be where your main savings come from.