Every so often we get a new study that examines some aspect of transit politics and comes up with counterintuitive results. This is generally a good thing, because it's always important to reexamine your assumptions, but anti-transit forces will often inflate their conclusions in order to undermine transit advocates. Usually there's some theme of, "Oh, you muddle-headed transit advocates! You really mean well, but a bus with only two people on it is more polluting than a single-occupancy car. Don't you see that transit will never stop us from polluting the air?"

The latest such study, "Maintaining Equity in Transit-Rich Neighborhoods" (PDF), comes from Stephanie Pollack, Barry Bluestone and Chase Billingham of Northeastern University. I'm sure that Garyg or some other troll will be linking to it from the Streetsblog comments in no time: "Oh, you muddle-headed transit advocates! You really mean well, but transit lines only wind up increasing the percentage of people in the neighborhood using cars! Don't you see that transit will never be a real alternative to driving?"

Just reading through the reports on the article, I began to have some doubts, and after flipping through the PDF, I've got some real concerns. But before I get into the article, I'd just like everyone who reads it to imagine how much easier it would be to read if the authors had done a global search and replace of "TRN" with "transit-rich neighborhood." Done? Okay, let's move on.

The report is based on the Census data, and deals with a number of outcomes, including median income, racial diversity and attempts to estimate population displacement, but the outcomes we're concerned with are transit use for commuting and motor vehicle ownership. The authors studied the neighborhoods around 42 transit stations that had opened between 1990 and 2000. 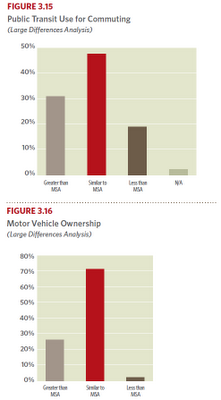 So first, here are the big news findings: in 19% of these 42 transit-rich neighborhoods, the percentage of people commuting by transit increased at less than 80% of the rate for the metropolitan statistical area as a whole (and in 31% of them, the increase was more than 20% higher than the metropolis). In 26% of these neighborhoods, car ownership rose more than 20% faster than in the surrounding metropolis (and in only one neighborhood was it less than 80% of the rate for the metropolis). The authors' explanation is that transit-oriented development can lead to gentrification, bringing in wealthier suburbanites who keep their cars.

It's a prospect that's worth watching out for, and Pollack, Bluestone and Billingham recommend several possible measures to prevent it, including bundling transit passes with housing, unbundling parking, and reducing parking requirements. Those are a good idea in any area well-served by transit, whether the transit is old or new. But the effects they report are not very large, and it is important to connect them to our overall goals.

In terms of access for all, these results are largely irrelevant. The access is there, because the transit has just been built. There may be a long-term cyclical effect if the transit is not well-patronized; I will discuss that later.

In terms of increasing energy efficiency and reducing pollution, we want to see worldwide change. In terms of asthma and carnage the effects are local, but they are per area, not per capita. In terms of obesity and carnage, we are concerned not with increasing transit use but decreasing car use; walking and bicycling are as good for those as transit, if not better.

Why do we care about local effects as opposed to metropolitan or global effects? Because if people get displaced, they go somewhere. If poor, transit-dependent nonwhite people are forced by gentrification to move to a less transit-oriented suburb, they will not be any more likely to afford cars there than they did in the city, so they will bring their transit-dependent ways to the suburb. This means more business for the suburban transit lines, and more political pressure for transit expansion in the suburbs, if they can organize enough to overcome the inevitable opposition. The result could very well be a net decrease in car ownership and car use across the metro area.

The effects measured by Pollack and her colleagues are only directly relevant for one of our goals, improving society. Unfortunately, that's the goal that's been the hardest to pin down. Walkable neighborhoods, more face-to-face interaction, walkable businesses are all part of it. Car ownership definitely brings these down, as do car commutes, but it's hard to know how much.

Of course, transit use is a feedback loop, and if these car-owning yuppies demand wider roads it will set back the cause of transit. However, since there were overall population increases in many of these neighborhoods, there has been an overall increase in raw numbers of transit riders, and since there is gentrification, these transit riders tend to be wealthier and more influential, and thus more effective advocates for transit expansion, and more likely to be seen by potential transit funders as "us" than as "them." A racist state legislator is more likely to vote to fund a transit project if his friend's daughter lives in the neighborhood than if there's nothing there but "those people." And you thought the Cap'n couldn't do realpolitik!

All in all, this is something to be mildly concerned about, and if the report gets more people working to bundle transit passes with leases and to eliminate parking minima and unbundle parking, that's a good thing. But the analysis is so sketchy and so distantly related to the goals of transit advocacy that at this point it's a wash. Keep that in mind, all my muddle-headed transit advocates!

P.S. Also, check out Charles Siegel's comment on the Streetsblog DC discussion of the issue. It's true: the best way to bring down the price of anything is to produce a lot of it!
Posted by Cap'n Transit at 11:07 PM

I would be more convinced of this if you could give a concrete example:

"since there were overall population increases in many of these neighborhoods, there has been an overall increase in raw numbers of transit riders, and since there is gentrification, these transit riders tend to be wealthier and more influential, and thus more effective advocates for transit expansion, and more likely to be seen by potential transit funders as "us" than as "them."

You're probably familiar with Christopher Alexander's "A pattern language"--however, you may not know that the concept has spread to other fields, among them Software Design.
It might be useful/worthwhile to compile a pattern language for transit-- Things like "Problem with Average Density".