I've long argued that the concept of "BRT" attempting to mimic subway lines is an inefficient and counterproductive strategy. When you've got a lot of people who think they're too good to ride the bus, it's flashy and can get people to try it, but when you've got lots of bus riders already, what you need is just an improvement in value. 181st Street in Upper Manhattan is an example of this.

On Friday, Streetsblog reported on a presentation by the Department of Transportation about alternatives for the 181st Street corridor in Washington Heights. "Alternative 2 would create a two-way, protected transit mall along this stretch, with raised medians serving as bus stops," writes Noah Kazis. Why does that matter? Check out the Bronx bus map (PDF): 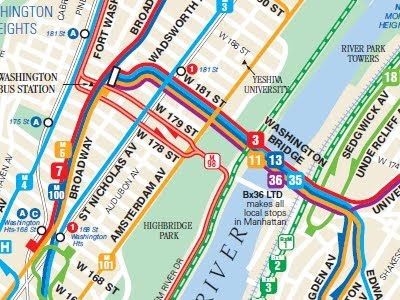 There are five bus routes that start at the Port Authority's uptown bus terminal, cross Manhattan along 181st Street, go across the Washington Bridge to the Bronx, and fan out to cover most of the western Bronx. The Bx3 goes north past Bronx Community College, Lehman College and the VA Hospital to Kingsbridge. The Bx36 goes clear across the borough, past West Farms and Parkchester to Castle Hill. The Bx11 and Bx35 cover Morrisania and the Bx13 goes south to Yankee Stadium and the courts. They have high ridership, which keeps costs down; none of them require heavy subsidies:

The Bx36 is a long route, but I would guess that more than half the ridership crosses the bridge to Manhattan, and even more for the other routes. Many of the people who live in this part of the Bronx are Dominican, and they use these buses to connect with friends, relatives and jobs in the Dominican neighborhoods of Washington Heights and Inwood. Others use these buses to connect with the A and 1 trains in Manhattan, which provide a more direct route to many destinations than the 4 and D trains.

Significantly, these buses also allow Bronx residents to reach the George Washington Bridge bus terminal, where they can take buses run by New Jersey Transit and Red and Tan Lines to various locations in New Jersey and Rockland County. There are also private van services that run from the GWB terminal across the bridge and west to Paterson and south along Bergenline Avenue to Hudson County. These buses form a vital east-west link between communities in an area where all the train lines run north-south.

If you actually go to check out these routes sometime, well, it can try the patience of Job. Double-parking is rampant along 181st Street, and all it takes is one double-parked car to hold up three buses. It's common for a bus to take as long to get from Broadway to Amsterdam as from Amsterdam to the Grand Concourse. These delays cause bunching, which has repercussions down all five lines.

Alternative 2 could actually work as a kind of "bus network acupuncture," relieving a pressure point and thereby improving flow on a large section of the network. Putting in bus lanes on three blocks of one street could improve the commutes of 50,000 people, and through speedier and more reliable trips, attract more people to the bus who might otherwise have taken car services. Compare that to the hundred-plus blocks of the First and Second Avenue Select Bus Service (M15 average weekday ridership: 53,510), and you get a huge bang for the buck.

And this is why it was so disheartening to me to read these words from Manhattan Transportation Commissioner Forgione: "We will not proceed with anything without community support."

I know what "community support" refers to, and it has precious little to do with actual community support. We're talking about a community board that's dominated by drivers in a neighborhood where 80% of households don't own a single car. These are people who are much more likely to double-park than ride the bus, even though the real community is much more likely to be riding the bus. We're talking about a lot of self-important "community leaders" who are convinced that their small circle of friends constitutes the community. These are the people who Commissioner Sadik-Khan stood up to, and got blasted for it. These are the people that John Liu, Bill Thompson and Jimmy Vacca repeatedly insist should have veto power over any transportation project. And it looks like in this case Forgione may defer to them.

Forgione is also talking about deferring to the "community" in Washington Heights, but what about the communities across the river in Tremont, Morrisania, Morris Heights, University Heights and High Bridge? Will their support matter?

I definitely believe that people should have some say over what transportation facilities are built in their districts. It would have been nice if Vacca and Liu had been around when people's homes were being bulldozed for the Cross-Bronx Expressway. Members of every affected community should be given the opportunity to raise their concerns, and those concerns should be taken seriously. But I don't think they should have veto power.

Alternative 2 would not tear down any buildings, and it will not blight the neighborhood. It would not flood parallel streets with displaced traffic. It would make these three blocks of 181st Street more like the Fulton Mall in Brooklyn, which would be an improvement.

Fortunately, Councilmember Rodgriguez seems to get this. His comments as reported by Noah were heartening. I hope he will talk to Councilmembers Cabrera, Foster and Arroyo and get their support on this. Transit advocates in that area should reach out to community leaders in the western Bronx and get them to the meetings where this project will be discussed. But the bottom line is that DOT cannot just listen to Washington Heights on this issue. They should conduct outreach along the five bus lines, and find out how much support there is there.
Posted by Cap'n Transit at 11:19 PM

What do you mean, "These are the people?" Not all community boards are against alternative transportation. Remember how CB 11 wanted bike lanes on 1st and 2nd, but JSK cut them at 96th?

Cap'n, there are any number of interests defending the status quo. The problem that the community boards have is that they are not technical experts and don't have the expertise necessary to evaluate these plans on their own. That being said, the reason for the study is the life-choking traffic on 181st St already, and DOT has made pretty good arguments throughout the process that doing nothing is not a sustainable solution.

I'm not sure I would say that half of the ridership on the other four routes crosses the bridge. On my trips to the West Bronx, I noticed that a lot of people used the bus as a feeder to the 4 & D trains, rather than crossing the bridge to the 1 & A trains, and of course, this is more true as you get to East Tremont & Morrisania. You'll notice on the Bx13 that a lot of trips during rush hour end on the Bronx side of the bridge.