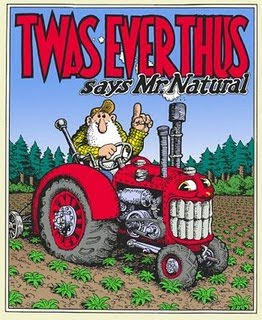 R. Crumb
Planetizen recently linked to a Times article about an odd development battle in Jersey City. There is an old Pennsylvania Railroad viaduct that many want to rebuild as a pedestrian walkway, like the High Line in Manhattan and before it the Promenade Plantée in Paris. However, the actual bridges across streets are gone; all that remain are a series of six block-long, hundred-foot-wide stone embankments. In order to build a walkway the entire railbed would need to be rebuilt on top of the embankments.

Those plans are opposed by the developer, Steve Hyman, who bought the property from Conrail for three million dollars and wants to subdivide it and build housing. The coalition has a long archive of newsletters and articles detailing their fight with Hyman over the past ten years. According to one 2005 Times article (Word doc) he once wanted to simply knock down the embankment, the rendering in the latest article suggests that he is willing to at least preserve the outer appearance of them, but maybe hollow them out for parking.

Now here's the part where I slapped my forehead in disbelief. Hyman has visited both the High Line and the Promenade Plantée and claims to be a supporter of both, "But Jersey City is not New York or Paris," he told the Times. "The embankment is not located in an area filled with shops and commerce like those places have."

Well you know what? Ten years ago the area around the High Line wasn't filled with the kinds of shops and commerce Hyman is thinking of, it was filled with meat packing plants and hookers, and it was not a pleasant place to hang out in if you weren't interested in meat of one kind or another. Twenty years ago the area around the Promenade Plantée was a shabby nowheresville.

In fact, the Jersey City embankments are not very far from shops and commerce: the eastern end is right across the street from a Bed, Bath and Beyond, a block away from the Newport Mall, and a few blocks more from all the development along the waterfront. It really wouldn't be hard to develop this if someone had the desire and the resources.

Hyman does talk about resources: "And there is no money here to build a High Line. It cost $150 million in New York — and about a third of that was contributed by celebrity philanthropists." In Paris there was a similar story, described by the Boston Globe, but the money came from the city instead, and I don't think Jersey City or Hudson County have that kind of money, and I wouldn't bother asking Chris Christie for it.

Hyman's right about the resources, but he's totally off about the history. He could just be lying, but I've heard this from other people who were being completely honest. They go to Paris or Manhattan or Copenhagen and they see something they like. Then they either think it was always there and always fabulous, but it wasn't, once upon a time it looked just as crappy as Jersey City or Queens. Or else they think this stuff just happens magically, because it's Paris, or Manhattan, but it doesn't, it takes time, money and effort.
Posted by Cap'n Transit at 11:13 PM

At the risk of being too contrarian, let me ask: why should these embankments be turned into another rail-trail? Why not use them for their original purpose, and maybe rebuild something like the Exchange Street terminal, so that people can get to Jersey City by transit not just from Newark and Hoboken?

As you know, Alon, I'm all for reusing existing rail infrastructure instead of converting it to recreational use. But I live near a noisy elevated line, and I think we should be careful about how much noise it would make. If it can be done without too much noise, sure.