The problem with the Northern Branch project

For a months now I've been telling people that the "transit" proposed for the bridge is just sprawl transit, and it's true. There wouldn't even be a stop in Nyack; if commuter rail is chosen the nearest station would be near the Palisades Mall in West Nyack, more than two miles away, and if "Bus Rapid Transit" is chosen the nearest station would be at the western end of Nyack, at the top of the hill where Main Street crosses the Thruway, a mile from downtown. The Thruway people would build huge park-and-rides at these stations, and park-and-rides are not the answer. People who drive to park-and-rides think of themselves as drivers, not transit riders, and they will vote accordingly.

Instead, I've suggested that Rockland County can improve its connections to jobs in New York City and New Jersey by rebuilding its rail network. There are four railroads that connect Rockland to Hoboken, but only two (the Erie Main and Pascack Valley lines) still have passenger service, but the trains run on the slower and more sprawly Graham Line instead of the Main Line between Harriman and Otisville, and the Pascack Valley trains terminate in Spring Valley instead of Haverstraw or New City. The Erie Northern Branch used to run to Nyack but now only sees freight as far as the New York State line in Northvale. The New York Central West Shore Line is currently owned and operated by the Chesapeake System as a high-volume freight line between North Bergen and Selkirk, but most of the second track has been removed, and if it were restored there would be room for commuter rail service.

For much less than the five billion dollars that Cuomo and friends want to spend doubling the width of the Tappan Zee Bridge, we could restore passenger service to Nyack, West Nyack, New City, Stony Point and Haverstraw. This would require restoring track in some places, re-acquiring the right-of-way in others, double-tracking and eliminating grade crossings here and there, and electrification. We might even have enough money to rebuild the old Erie Main through the Orange County villages of Goshen and Middletown. If we can ever build a new tunnel (which would cost a lot more than five billion but would move more people than the proposed bridge), the trains could go straight into Manhattan.

Believe it or not, there is movement in this direction. New Jersey Transit has just released a Draft Environmental Impact Statement for their plan to reactivate passenger service on the Northern Branch between North Bergen and Tenafly. At this point I would love to be able to point to this as an example of success that could be extended right up to Sparkill and Nyack. But there are problems. And by problems I mean parking. Way too much of it. This is from the executive summary of the DEIS: 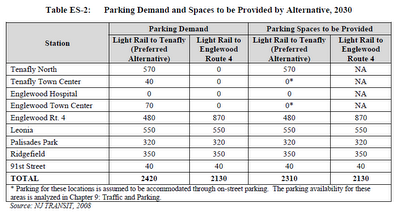 Yes, that's right, 2130 or 2310 parking spaces! I tweeted about this a couple of weeks ago, and @majormajor42 replied, "what do you think of the Ramsey Rt17 station parking garage?" I think that's an excellent question, and I will try to give it the thoughtful answer it deserves in another post soon.

Thanks for the heads up about the DEIR. My parents live close to this corridor. They have told me before that they are not happy about the parking lot plan either.

It really depends on how much traffic they can realistically expect. I don't think 2,000 parking spaces are inherently offensive on a line that could get 10,000 inbound commuters.

That said, regardless of traffic, transit should aim at developing areas around train stations, instead of keeping them as parking lots. Englewood, where they're planning job-center stops, is fortunately not getting too much parking. But why is dense Palisades Park getting multiple hundreds of parking spots?

The Northern Branch and Tappan Zee concurrent projects bring to mind another instance of concurrent train and car projects -- the new Yankee Stadium.

Fast-forward 10 years, and Cap'n Transit will be saying, "I told you so" to President Cuomo.