We could have "BRT on the bridge" tomorrow

The new site set up by the Tri-state Transportation Campaign is brtonthebridge.org. I happen to prefer my own site, thetappanzeebridgeisacancerinourmidst.com, because nobody but transit advocates gets excited about "BRT," but I'm not opposed to some bus improvements on the bridge. Let's do it! Let's have BRT on the bridge right now!

But wait! Here's Kate Slevin telling Judy Rife that "we're not against a new bridge; we can't have BRT without one." Huh? But I thought that BRT was this cheap, flexible thing. No need to condemn people's homes. No need to pay for expensive rails or big studies. You can do BRT with some cops and a little paint!

The truth is that we could have high occupancy/toll lanes - the bridge component of the "BRT" that was planned in the last round - in place in a very short period of time. Here's how it could be done. Since 1990 the bridge has had a "reversible" lane shoehorned between the three eastbound and three westbound lanes. One of the reasons the bridge maintenance costs are so high is because they include a special vehicle that moves a barrier from one side of the lane to the other. 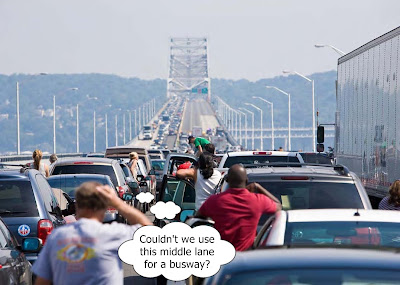 The Thruway Authority could replace the movable barrier with two fixed barriers, leading to a single toll booth (or two), which would only let in the following vehicles:

It's not strictly necessary to allow high-occupancy vehicles or toll-payers, but it can help deflect an empty lanes attack.

That's all we need. The governor could issue an executive order tomorrow and have the system in place within a week. So why doesn't Tri-State demand BRT on the bridge now? Why are they telling us that we can't have BRT without a new bridge?
Posted by Cap'n Transit at 11:51 PM

"Why are they telling us that we can't have BRT without a new bridge?"

My guess is that because the state DOT's performance is mostly measured on inputs, not outputs. In other words, when the public hears about how great the DOT as a whole is, they hear about how many billions they're "investing" in transportation, not about how much they've improved transportation for people. There's no real coherent overall goal, other than to appropriate as much money from the federal government as possible, and spend it as quickly as possible on some megaproject.

Just to clarify, Arcady: the Tri-State Transportation Campaign is not a government entity. It's an advocacy organization, a private nonprofit funded by donations. They're supposed to be advocating for better transit, cycling and walking. So why wait until the bridge is built, when they could have asked for transit on it ten years ago?

Presumably they're taking the DOT's logic at face value, and not realizing, for whatever reason, that the DOT's goal is, at least partially, to spend as much money as possible, especially when it's someone else's money.

That's certainly possible; I'm not a mind reader. But last night I posted another possible explanation.