About that value gap...

Ben Kabak picked up on an interesting story: Cambridge Systematics has just completed an analysis of the 2010 MTA budget on commission for Rockland County, and found a "value gap" of $41,930,000. According to Cambridge, in 2010 Rockland residents and businesses paid $110 million in taxes, fees and fares, but only got $68.0 million in services and capital improvements. The report says that the county can either withdraw from the MTA (which would have to be approved by the State Legislature) or work out some kind of "Value Gap Reduction," such as:Yes, the Cambridge consultants recommended reducing parking fees twice in the same bullet list. And yes, increasing service is at the bottom of the list. You can tell where these people have their priorities. But there's much worse in the report. Larry Littlefield won't shut up about pension and debt service, and he's absolutely right. In a comment on Second Avenue Sagas, Larry wrote,


Right, did they include the cost of debts, the cost of past pensions, and the cost of retiree health care in their analysis? Everyone has a value gap because much of the money is going to the past. They just don’t want to pay a share of the debt.

I think Ben scared people off the report (PDF) by calling it "a rather technical explanation," but it answers Larry's question. It's pretty clear that they include costs for pensions and retiree health care in the operating budgets, but right there on page 8 they say, "No debt service payments are included."
So what would debt service be? Further down on Page 8, Cambridge says that they calculated Rockland's benefits from the MTA Capital Construction budget by multiplying it by 2.19%, since Rockland has "2.19% of region’s population and jobs (US Census and Bureau of Labor Statistics)."

So if we multiply the MTA's total debt service of $1.91 billion by 2.19%, Rockland's share of the debt comes to $41.92 million, which is almost exactly the same as the "Value Gap." In other words, Larry is spot on. Rockland County has the same Value Gap that we all have: the MTA's debt. Larry continues:


And speaking of debt, did Rockland go for Pataki all those years? In that case, they voted in favor of it.

At this point, though, it's worth asking what we mean by "fair." Should every county get back exactly what they pay into the MTA? Or should Rockland, with a median household income of $67,971, perhaps pay more per capita than the Bronx, with a median household income of $27,611? On the other hand, maybe we should separate transit from charity. Maybe, in fact, Rockland should get a greater share of the transit capital budget to compensate for the destruction wrought by the Tappan Zee Bridge, the Palisades Parkway and I-287.

So what if we did want them to get another $42 million a year in transit funding? Reducing payments and suspending park-and-ride fees are not going to improve Rockland's transportation situation. Increasing payments to the "DORF Fund" would help if it led to an increase in transit coverage, but not if it just allows Rockland to cut their own transit subsidies. Paying for Sunday service on the Tappan Zee Express bus? That's a no-brainer. 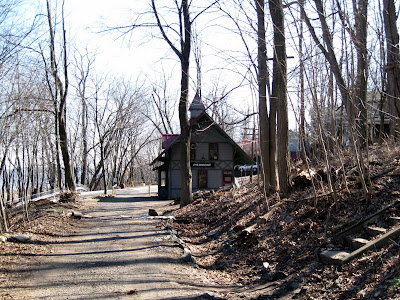 One of the many drains on Rockland County's budget is underutilized transit infrastructure.
Here's an interesting one: "MTA could provide funds to establish a dedicated BRT/bus service on portions of the Piermont Line and Route 59 in Rockland County." I've said that if there's "BRT" anywhere in Rockland, it should be on Route 59 and not the Thruway, but this is one issue where Cambridge Systematics is more radical than the Tri-State Transportation Campaign.

The best use of that money would be to reactivate the Northern Branch all the way through Sparkill, Piermont and Nyack, to take advantage of the dense, walkable development that already exists near the old train stations. And of course, if we tear down the Tappan Zee Bridge and don't replace it, the transit will need a lot less in the way of subsidies and Rockland's budget will be in a lot better shape.
Posted by Cap'n Transit at 1:17 AM